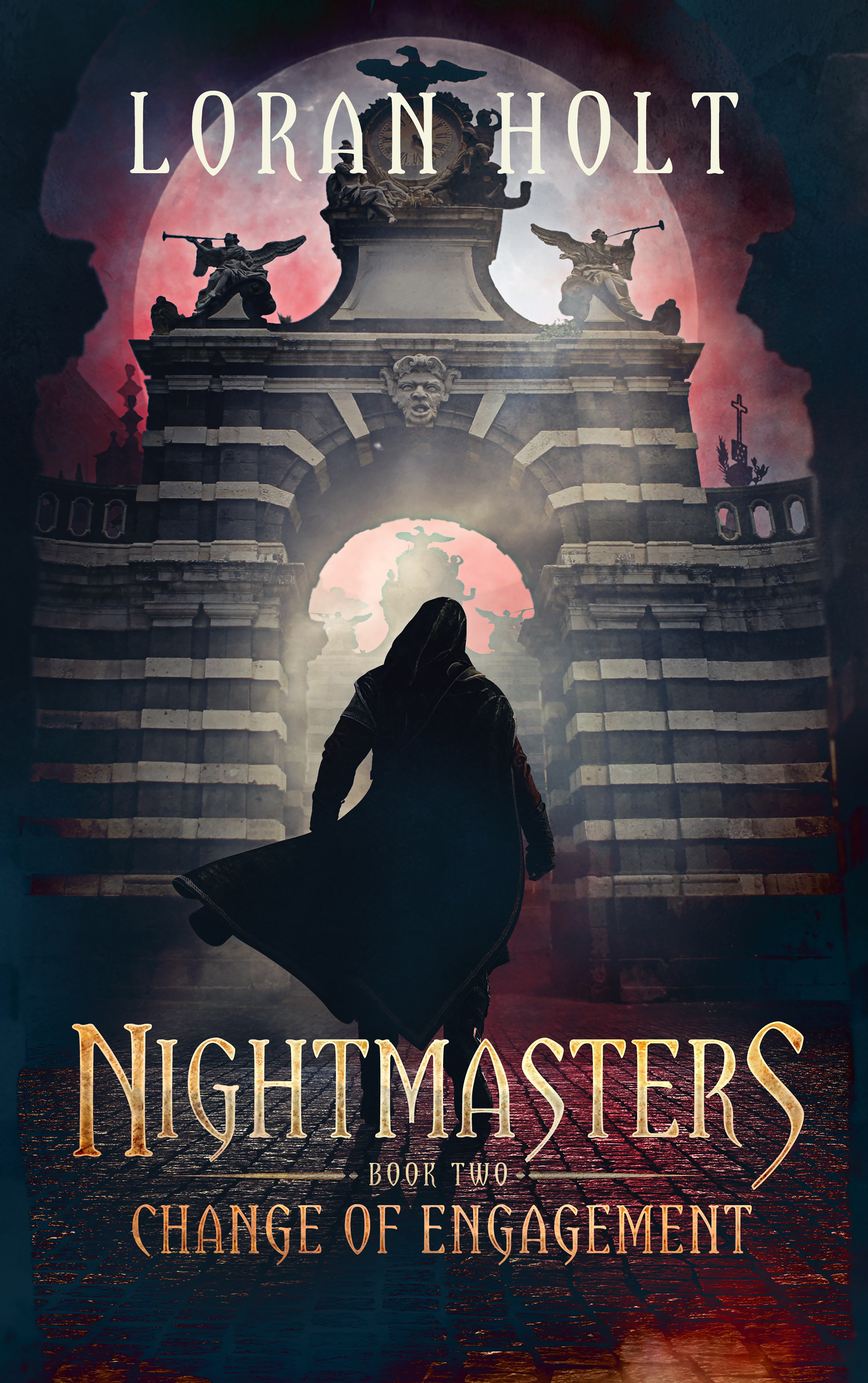 Kelgan Defthand and his rather motley crew continue on their quest to defeat an unknown and terrible malevolence. They are expecting the same places, faces, and traces of evil, but an enormous surprise awaits them. A mysterious ship takes them to an even more mysterious destination, and “Others” seem to have intruded.

Who are they? What do they want? Can they be trusted?

Neroma di Nerrill! Her name was like an aria—he could have written an opera with music soaring and soaring until . . . .

A sharp pain in his hand brought him up short. Raising his head in bewilderment he found himself lying, face down, fully clothed, on barren earth while clutching a sharp rock. The little rill which had run so merrily by, was a channel of cracked mud alongside a forlorn stand of lifeless, barren tree trunks with fallen branches.

Finding his feet, he ran in horror back to the campsite. Nothing! There was no sign of a camp—no people, no wagon, just a scraggly bush or two and a rutted dirt road stretching both directions into the no-longer-seen distance.

Like a madman he ran—back and forth, back and forth—until, exhausted, his chest heaving with painful unhs, he gave way to sobbing despair.

No! It’s not real! That’s what they want! I’ve got to laugh—laugh!

Calming his breath, he ventured a short attempt at laughter. No discernable alteration of his surroundings.

Again, and again, he forced out laughs of every type—shrill giggles, amused chortles, booming guffaws—the barren empty landscape was unchanging.

The desperate nature of his predicament was rapidly dawning on him.

Noting that his hand hurt and was bleeding, from where the rock had actually pierced the skin, he almost soundlessly mouthed a small healing spell. The bleeding continued, unabated.

Thoroughly terrified now, he strove for a semblance, at least outwardly, of rationality. Making what he knew was a pathetic try at steeling himself, he poured, or hoped, additional strength into his wards.

That was probably it, he told himself, I got carried away and just forgot . . . .

He repeated the healing spell in a low voice, enunciating the words with careful attention to the way they rolled off his tongue, and with just the right cadence—not too fast, not too slow, a measured beat.

The bleeding continued. It was drying up a bit, but that was only the result of the moistureless air and the passage of time.

For the first time he noticed he was without either sword or even the small dagger he concealed in his boot. One doesn’t wear piercing instruments of that sort to a rendezvous, was his sourly sardonic thought.

He sat on a fallen branch and tried to think like a man without power or armament. A measure of sanity had returned but was of little comfort. He kept his thoughts carefully away from Neroma—that way lay madness. He knew that for a certainty.

There is a road with ruts—that means someone comes by on occasion. So, there must be a town somewhere down the road. I just have to find it, and hope they don’t immediately execute every stranger who comes their way.

He sat a little longer, practicing his meditation exercises, until he felt he could behave like any traveler who had gotten a little lost. Then he rose, brushed off his tunic, and tried to look as though the dishevel­ment came from the result of walking rather than hysteria.

He walked until he was footsore and the sun was low the sky. Just about to give up and try for a hollow in the dirt he could roll up in; coming over a low rise, he at last saw signs of a town.

Well, at least there seems to be inhabitants of this Phosphene deserted place.

Although it didn’t appear to be a prosperous community, there was some hope for a bed—even in a stable—and possibly a crust of bread, if they could spare any. He had some doubts on that score. From the vantage point of the rise, he surveyed the village, which by all rights could not rise even to that description. Most of the scantly scattered cottages—Cow sheds more like—were already dark. The villagers undoubtedly too impoverished to waste candles on relieving the darkness, and the meager wisps of smoke rising from the chimneys spoke of frugality to the point of privation. Nonetheless, he kept on walking for want of a better solution.

Arriving at the outskirts, and suddenly conscious of a blister on his right heel, he caught sight of a Blacksmith establishment which still showed signs of life.

Hobbling in that direction, he was hailed by a burly, bearded man who looked as though he was chosen by a Mummer’s troupe to play a Blacksmith. The man held a glowing rod of iron, which passed very well for a weapon.

Answering the hail, and showing both hands, Kelgan asserted, “I have lost my way, it seems, and have walked for hours in what must be a wrong direction.”

“And where was that you was headed, pray.”

“The house of my cousin, who lives alone outside of a town—I hope this is the one. I have come from Asquita (Kelgan hoped there might have been such a place), do you know it?”

“Heard the name somehow. Don’t know it more than that.”

Kelgan blew out a breath of relief.

“My cousin was never much for people, and lives off the road, so I must have walked right past, or gone the opposite direction from the one needed. Do you have an inn, or anything of that sort? If I could shelter for the night, I could retrace my steps.”

A scornful snort followed his inquiry. “An inn? You are a stranger.”

“I’m not too proud to sleep in a stable. I’m good with mules.”

“Them, we got. I have a shed out back for my mule, if you want to share.” The Blacksmith sniggered.

“More than kind. Anyplace off the road, and under a roof.”

The Smith looked him over with something like a sneer. “Looks like you’ve already been sleepin’ rough.”

Kelgan nodded, hoping he looked sincere, “Yes, it was farther than I was aware, and the towns were farther apart. I’m afraid I’m a bit travel-worn,” he added, with a touch of rue thrown in.

“If you’ve got any money, I’ll warm you some water to splash in. Won’t be a real bath, but it’ll be somethin’.”

Kelgan’s heart sank. Money! He felt at his belt, and was over­joyed to find that his small purse was still attached to his belt.

“Well, I’ve got a little. I think I could pay you for the water and maybe a bit of bread.”

The Smith appraised him again, shrewdly. Kelgan’s gangly frame and lack of armament must have reassured him. “Said you were good with mules?”

“Uh, yes, I am. A goodly bit of experience, actually.” He wondered what unpleasant task the Smith had in mind.

“My old jenny’s been limpin.’ Maybe you could see what’s wrong. She’s not in a mood to let me close.”

Kelgan gulped, “I’ll see what I can do.”

The Smith pointed the way to the shed. “I’d take you back there, but I gotta warm this rod up again.” “It’s fine, my thanks.”

Feeling his way in the rapidly darkening evening, Kelgan nearly ran right into the shed.

Not much room for the jenny and me. He gave a short chuckle, then rubbed his eyes.

Guess I misestimated in the dark. The shed was larger than he had first thought.

Sliding the barn door to one side, he peered into the gloom. The mule, startled at his appearance, brayed nervously and shuffled side­ways.

Not even a stall. Oh well, if she doesn’t object to strange fellows sharing her bed. A little titter escaped him.

He eased in, keeping to the wall. Uttering noises meant to be soothing, he inched a little closer, keeping both hands out in front of him.

“Good evening, Madame, what seems to be the problem?”

The mule, puzzled, backed away, but without signs of hostility.

He inched just a tad closer. “I hear you’ve been having a little trouble with your hoof? Or is it the shin? A touch of rheumatics in the hip?” He kept his voice even and cheerful.

“What if I just give you a little grooming session before I look at your limbs?”

He cast around for a brush. The only thing he could see was a broom that was styled so that it could be pushed.

“Uh, hold on just a moment, Madame. This calls for a little improvisation.”

Looking the push-broom over, he determined that it probably wouldn’t scrape the hide off Her Majesty if he brushed carefully. The handle presented a larger problem. He couldn’t see a way to separate it from the brush outside of brute force, which would scare the already skittish animal half to death.

Maybe if I just hold the Dark-frakking thing over my shoulder I can brush without breaking any of her ribs. He gave another little chuckle at the image in his mind, then frowned. Did the handle seem looser than he had thought? He wiggled it experimentally. Yes! He pulled it free and sidled up to the mule.

Has anyone told you Madame, that you are a splendid example of muleocity? Indeed, I believe you are the most mulish mule of my acquaintance.” 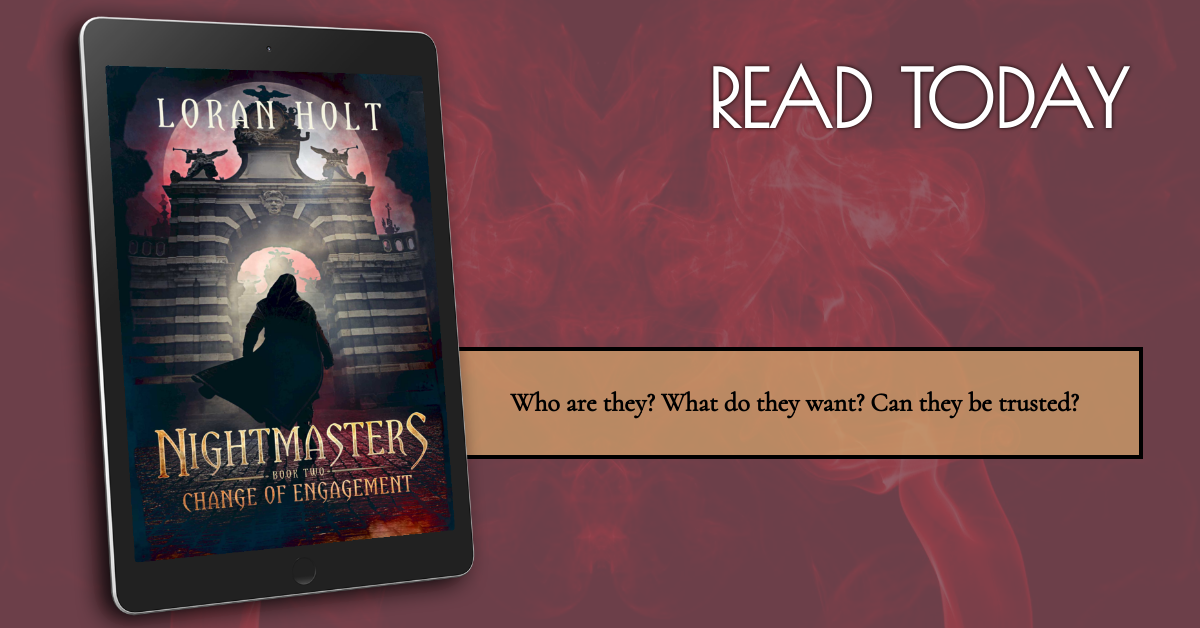 Recently retired from a job as a University Professor, and looking for diversion in sunny Southern California, Loran Holt did what any Southern Californian does – took up writing, of course. Feeling that sword-and-sorcery suited her personality admirably, she set her sights on that genre. Nightmasters is the result and her first published work of fiction, but she is already the published author of two books on silent film costume design under the Author name Lora Ann Sigler.

One thought on “#Excerpt “Nightmasters Book 2: Change of Engagement” by Loran Holt”