One woman must learn to love again with the help of her supper club friends and the man next door in this delightful enemies-to-lovers small-town romance.

The best meals. The perfect company. And just enough sparks to make it complicated . . .

Serenity Wheeler’s Supper Club is all about getting together with great friends, incredible food, and a whole lot of dishing—not for hooking up. Still, Serenity knows inviting her friend’s brother to one of her dinners is just good manners, but the ultra-fine, hazel-eyed Gabriel Cunningham has a gift for saying the wrong thing at the really wrong time. Especially when it comes to her cooking.

Though refreshments and camaraderie may be the supper club’s mantra, Serenity and Gabriel know there’s more between them than just sharing delicious meals. But she can’t let herself fall for Gabriel. Because while cooking with love is one thing, trusting it is quite another…

Welcome to the tour for Promise of the Visitor, one of three novellas in the Silver Sphere Series by David Gittlin. Read on for more info and a chance to win a $50 Amazon e-gift card! 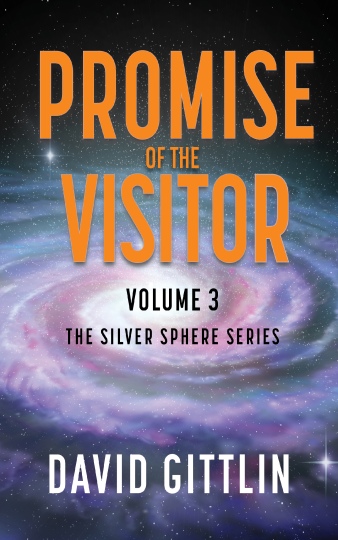 Promise of the Visitor

The police have arrived to investigate a strange report. What happens next?

An unconscious body lies on the kitchen floor. Two Daytona Police deputies are ringing the bell on the front door of the beach house mystery writer Jacob Cassel rents. It’s going to be an interesting morning for Jacob, his super-smart girlfriend, Amy, and Arcon, an AI from the other side of the Milky Way. If they can survive the morning without being thrown in jail, they are expecting a visitor from the planet Aneleya to arrive later in the evening bearing a cornucopia of gifts for the human race. Instead of gifts, the visitor arrives with dire news about a doomsday device threatening the destruction of planet Earth and the entire solar system.

Welcome aboard for this suspenseful interstellar adventure of The Silver Sphere Series!

NO ONE BESIDES ME and Amy knows that inside the golden sphere lives an artificial intelligence originating from the other side of the Milky Way. Said sphere rests on top of a beige granite counter beside a nickel-plated sink in Jeffrey’s ultra-modern kitchen. Except the kitchen belongs to a guy named Jack. I keep thinking “Jeffrey” because that’s the alter ego Jack uses as a front for his real name, Jack Markham. I thought Jeffrey Mortenson was my friend. Instead, he turns out to be an international criminal named Jack.

When I first met the artificial intelligence on a lonely stretch of Daytona Beach one night, it identified itself to me as “Arcon” because its actual name is unpronounceable in English or any other terrestrial tongue. At the time, Arcon was packed by his makers into something resembling a basketball-sized silver sphere. The packaging has changed on multiple occasions with the ridiculous demands of the circumstances we have somehow managed to live through. To be completely transparent, Arcon doesn’t actually have a name. He has an unpronounceable Aneleyan name only because the Aneleyan scientists who created Arcon needed to call him something besides, “it” or “the thing.” Arcon definitely doesn’t like to be referred to as a “thing.”

Arcon has preferences, but as far as I know, he doesn’t have feelings. He may, however, be developing them because his consciousness is evolving. I want to explore feelings and other matters in depth with Arcon when there isn’t a crisis at hand. Currently, we have one looming. I think of Arcon as a “he.” Actually, Arcon is neither male nor female. When we first met, Arcon presented himself to me as a “he” because he didn’t want any sexual tension to complicate our relationship. We only had three days to save the Earth, so there was no time to dither around with anything remotely romantic. Therefore, I’ve become accustomed to calling Arcon a “he,” although he really isn’t.

Speaking of sexual tension, my partner and current flame, Amy Goodwin, just walked back into the room. A white robe covers her lithe body. She’s put her long red hair up in a ponytail. She wears a light mask of makeup and a pair of flat heels. In her simple attire and after our long night of digging Arcon out of a sand dune, Amy still manages to look like a knockout. The ponytail, freckles, and white robe lend her an air of child-like innocence, despite her nearly six-foot-tall frame. I know that Amy can change from an innocent child into a desirable twenty-six-year-old woman in a heartbeat. She never ceases to surprise me. For example, if she wasn’t a brainy aerospace engineer and part-time astronomer, Amy might have had a successful career as a criminal. In the short time we’ve been together, Amy has proven she can think on her feet. She can talk her way out of the stickiest of circumstances. We’ve been through many of them. We’re in one now.

Amy had to take a break to put herself back together after what happened only fifteen minutes ago. Presently, there are two sheriff’s deputies knocking on our front door. Their unexpected arrival so soon after the incident is unnerving, to put it mildly. The man lying unconscious on the marble kitchen floor owns the beach house we’ve been staying in. Whether the house is owned in the name of Jack, Jeffrey, or some shell corporation doesn’t matter. What matters is Jack will surely claim that we broke into his house, or we had an argument, and I attacked him. He’ll say he came back from a business trip, found us in the house, and a struggle ensued. He’ll claim he used the double-barreled Derringer a few feet from his bloodied head for self-defense.

If he goes with the self-defense story, Jack will have to come up with a plausible explanation as to how he wound up conked out on the floor. He had a gun, after all, and we didn’t. In actuality, Jack cracked his head on the marble flooring when he crumbled after Arcon zapped him with an electromagnetic energy bolt. At the time, Jack was in a murderous rage. He wanted to kill Amy, again, after succeeding to do so once before. Jack is as devious a criminal as any. I’m sure he’ll come up with a doozy of a story to cover his tracks. And, since he owns the house, I fear the deputies will believe Jack’s fictional version of the story, assuming he wakes up to tell it.

“Daytona Beach Sheriff’s Deputies,” I hear through the front door. “Coming,” I announce. 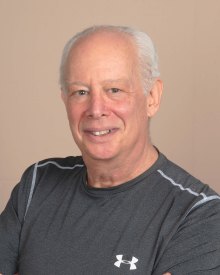 Only one thing stood between me and my dream of becoming a creative writer: I couldn’t do two things at once.

Upon retiring from my career in marketing communications, I decided to devote my full attention to writing fiction, thereby solving my multi-tasking challenge.

I began my creative writing journey by enrolling in the online Writers’ Program offered by UCLA. In a series of courses taught by professional writers, I learned how to craft memorable characters, create colorful worlds, and outline suspenseful plots enriched with drama and conflict. Taking one baby step at a time, I managed to bridge the gulf between writing promotional copy in short bursts to rendering full scale novels. As an interim step, I wrote three screenplays.

My three feature length scripts; “Love Will Find You,” “Joshua’s Decision, and “A Prescription for Happiness” have reached the finals or placed in several major screenplay competitions. My first novel, a Science Fantasy, “Three Days to Darkness,” was nominated to the James Kirkwood Prize for creative writing. My publishing company, Entelligent Entertainment, has also published “Scarlet Ambrosia” and my latest novel: “Micromium–Clean Energy from Mars.”

Click the link below for a chance to win a $50 Amazon e-Gift Card!!!

Dex is book 3 in the O’Sullivan Brothers Irish mafia series.

No cliffhangers.
No cheating.
Includes sizzling hot scenes.
Can be read as a standalone. 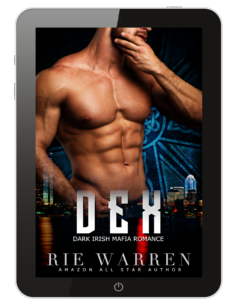 DEX
She’s a bossy blue-blooded Bostonian. I’m a hardened mafia man. There’s no friggin’ way our two worlds should collide, but when they do . . . BOOM, CRASH, DESIRE.

Now it’s just my bad freakin’ luck I can’t keep my mind off the snobby babe’s banging body and beautiful eyes. When she runs into trouble and I’m there to rescue her, I’m ready to put my filthy fantasies into action whether she likes it or not.

I get to introduce the prim and proper woman to the heights of wild lust. But the one thing I really lord over her is a big fat dirty secret her dear daddy has kept from her for years.

Yeah, this is gonna be fun.

IVY
God, I could just scream. No man has ever undermined my composure as quickly as Declan “Dex” O’Sullivan.

It’s just my bad luck that I need his help when I come under attack. I find out then he’s much more than just a pain in my backside; he is seriously bad news. But he’s also breathtakingly attractive with his bad boy aura.

He’s conceited, crude, crass . . . and determined to lay claim over me.

When I realize I’ve got more in common with Dex than I ever thought possible, it’s all downhill from there. I’m about to become a pawn in a game of mafias and one more man I never considered an enemy before. Now that my life is on the line, can Dex save me one more time? 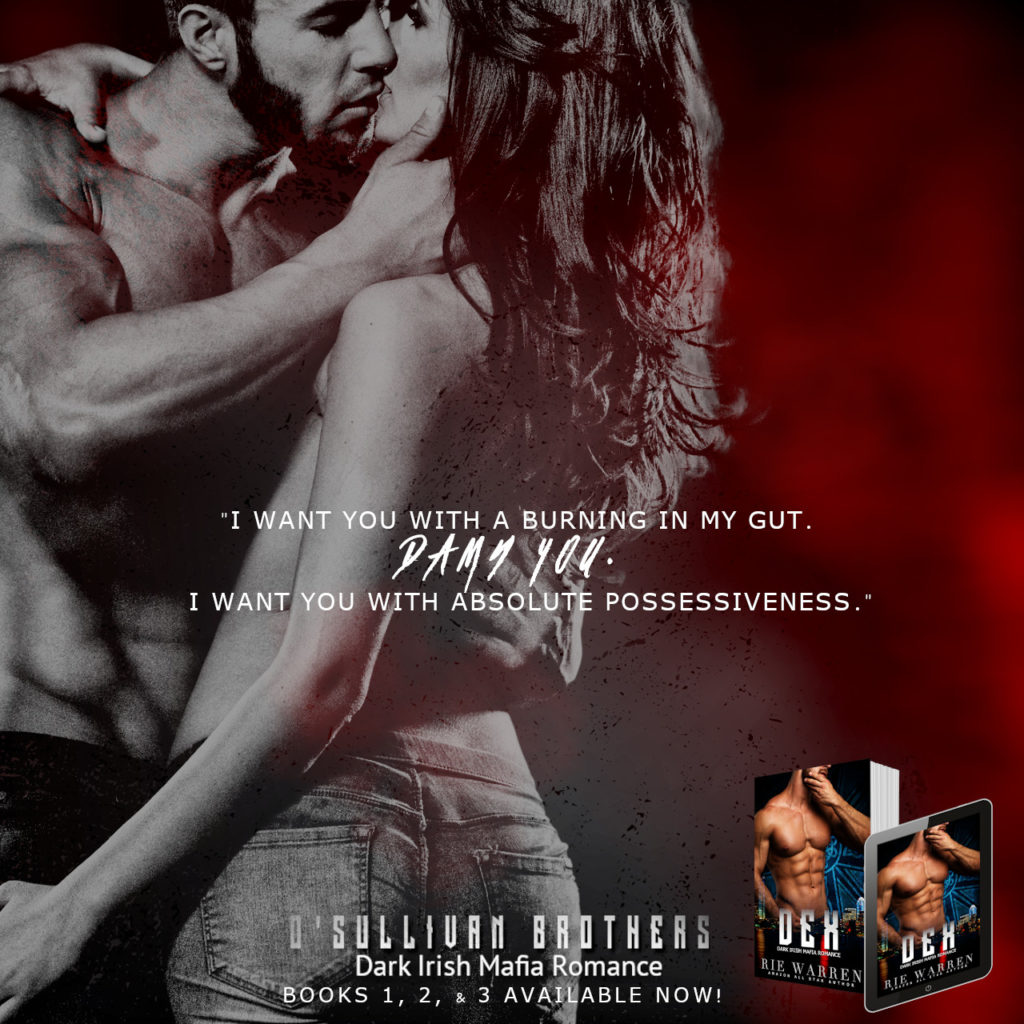 Badass, sassafras Rie Warren is an OG Amazon All Star author of Bad Boy books and MC romance. She delivers five-star sex, suspense, and the best banter around. Her stories are one hundred percent original, do not contain fluffy plots or virgin brides, and wring every last emotion from readers to leave them with a satisfied smile. Rie’s tough alpha males are never brought to heel, but are instead healed by the feisty femme fatale of their perfect match.
She grew up in Maine, went to college in Iowa (Iowa, what?), lived in Scotland, and married in Englishman. In true roundabout fashion, they came back to the States, settled in South Carolina’s lowcountry, putting down southern roots and pursuing their arty endeavors. Tale spinner and character diviner, Rie is a lover of sleep, wine, and rude memes often involving either Disney characters or Winnie the Pooh. She is raising two teen daughters along with an entire brain full of unruly characters. 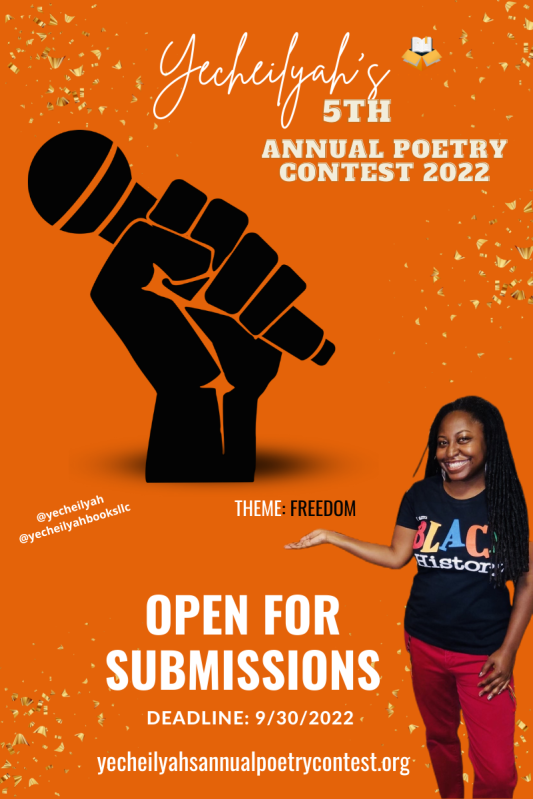 Yecheilyah’s Annual Poetry Contest is an online national and international poetry competition established in 2017 by award-winning author, book blogger, and poet Yecheilyah Ysrayl. The contest’s purpose is to find and celebrate the work of dope poets while raising awareness about the power of poetry.

To see the rules and guidelines, past winners, and a list of FABULOUS prizes for the top four poems, follow the link below and ENTER TO WIN! 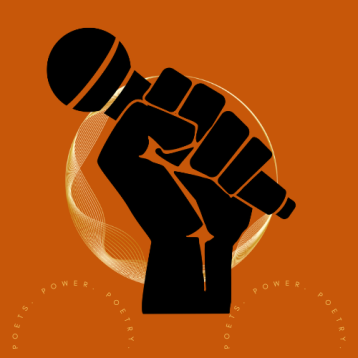