Jude and Mercedez have kept deadly secrets from each other.

Jackson’s suicide haunts Jude. She burned all evidence of her brother’s depravity. One less monster in the world, right? Tech-savvy Mercedez is the last living witness to a teenage amateur horror film that ended with a gruesome death. She never told.

A viral video (thanks, Whiskers) brings internet fame—forcing flip-phone wielding Jude to choose between her job as the second female in the VP motorcycle motorcade or her mixologist hobby.

The main character, Jude, who is stressing about her upcoming psych evaluation at work, has just had a bizarre encounter with her batty neighbor.

This is the moment that Jude is brought into the modern age. And a psychopath is going to find her and her best friend Mercedez.

Every chapter from Jude’s point of view has a drink recipe. That’s her hobby—making drink recipes. Mercedez and her cat Whiskers will push that hobby into something that jeopardizes Jude’s career. What are friends for?

Holy-get-the-god-damned-bleach. I shiver and dance in place with a full-on case of the heebie-jeebies.

I have to disinfect my phone.

I’m slathering the phone with sanitizing gel when Mercedez opens the apartment door. She has pizza in one hand, a shiny white box in the other.

“OK, Luddite-Lucy, we’re going to get you hooked up into the new world,” she says.

How can I fight pepperoni and bacon pizza? She even got mushrooms on my half.

Plus, at this moment my slide-phone is a biohazard and I am ready to give it up.

“You just missed a show.” I fill her in on the Betty incident.

“Oh, I run the other way before she can berate me.” Mercedez unwraps the new phone and pulls off the protective plastic cover. She fiddles and plinks. The weird little device lights up and beeps in response to her cajoling.

“Do you think she is dangerous?” I ask. “I mean, what if she hurts herself? Confuses bleach for apple juice. How would we even know?” I adjust my hold on the plate to keep the pizza slices from sliding off. “Here’s yours.” Mercedez takes the plate from me without glancing up. I continue, “I don’t think she has family.”

“I guess we’ll know something’s up when weird things stop happening to the neighbors,” Mercedez answers and continues to twiddle with the phone. “Remember when she flooded that couple?”

“Drug a hose over, stuck it through the shared air- conditioning handler closet and watered them good.”

“Hid everything before the HOA investigator got there.” “Yeah. When weird stuff like that stops, we’ll know she

“Let me show you how to use this.” Mercedez proudly walks me through features I’ll never remember.

“Here, I’ve made a Facebook account for you. I’ll make up a name for you—security clearance blah, blah, blah—you’ll probably say. Your 21st century social media name will be Jude Lawz. That’s funny,” she mumbles around mouthfuls of pizza, “and I’ll send you a friend request.”

Jude Lawz. Yeah, that’s not funny. I do not—and never will—wear a badge. My Dad would spin in his grave.

Mercedez gets silent, lost in phone-land. I sit back, determined to finish the apple-pie moonshine so I can move back to just plain smoky whiskey.

Mercedez interrupts my peace saying, “I joined you into the caving group and followed this funny mixologist. I’ll bet you’ll love him…”

I tune her out, nod at the appropriate places. She doesn’t need my approval to continue on. Mercedez—she self entertains. She picks me up when I am down. In return, I talk her off of ledges when she needs to be saved from herself.

Darn it, she requires words from me. “Huh?” I’m eloquent like that sometimes.

“We still going to Caver’s Heaven this weekend?” Mercedez phone buzzes like an angry hornets’ nest. We both jump. She picks up the pink iridescent beast and grimaces. “Damn. I gotta sit down and handle this Instagram campaign that’s got a type-o in it. Hold on, Penelope-Plum.”

Just for the record, Mercedez is not from the south. She transplanted from Ohio to the Valley when we were in fourth grade. That same year Forrest Gump came out and Mercedez watched it 5,000 times. She doesn’t exactly have a drawl, but her alliterations are totally south of the Mason-Dixon line.

Mercedez has trust issues with me and plans. My job needs me sometimes at a moment’s notice and I have to drop everything. It’s a valid question if we still have weekend plans.

“Well, of course. It’s a three-day weekend! I’ve got caves to visit. No local VP detail. She’s in China,” I assure her.

If I’m not on a motorcycle, I love to cave. Mercedez does not do either. She doesn’t do dirt. You’ll never find a speck of grime on her.

She does like to sit up there in the woods and read through a stack of paperbacks—oddly no electronic reader for Ms. 21st century—while yours truly leaves in the wee hours and returns in the evening as a battered, muddy, and bruised mess. Caving is fun that way.

I continue to explain my plans for the weekend, “I want to take the Triumph out for a spin and dust some cobwebs out of him.”

For what I do not own in trinkets or hair products I make up for in motorcycles. I have three at the moment. Two stored at a friend’s house up in the mountains and one here in the city. I don’t even own a car. Given that my job is to drive a motorcycle no matter the weather—one gets used to driving in anything.

At night the white-dragon-phone beeps and blinks at me. I glance at it a few times to see what the commotion is about. I got to get some sleep. Got to arrive at work buttoned-up. The psych- eval is just one part of a stress-me-out performance evaluation. I’m not senior and I am not in the Johnson club. Have to be tip- top, rested, and shiny—always.

‘You killed him didn’t you?’

Quote: “Taste this for me—is this too sweet?” Friends: Mercedez Jones

Shake gently in shaker with ice until chilled. Equal parts:

Strain over ice, judging is optional.

Tina O’Hailey is an animation professor, a caver, and an occasional mapper of grim, wet, twisty caves (if she owes a friend a favor or loses a bet), whose passion is to be secluded on a mountain and to write whilst surrounded by small, furry dogs and hot coffee. Tina was once struck by lightning.

She has served as an artistic trainer for Walt Disney Feature Animation, Dreamworks, and Electronic Arts. Any movie credit she has is minimal and usually found in the special thanks section. The meager credits do not account for the great honor it was to teach talented artists who worked on numerous feature films and games.

She has authored animation textbooks “Rig it Right”, “Hybrid Animation” published by Focal Press, and the Darkness Universe novels “Absolute Darkness”, “When Darkness Begins” published by Black Rose Writing. O’Hailey is a member of the NSS, VES, and International Thriller Writers.

Her favorite motorcycle is her BMW R1200C—mathematically perfect for her short legs, turns on a dime, and is the ugliest bike ever. 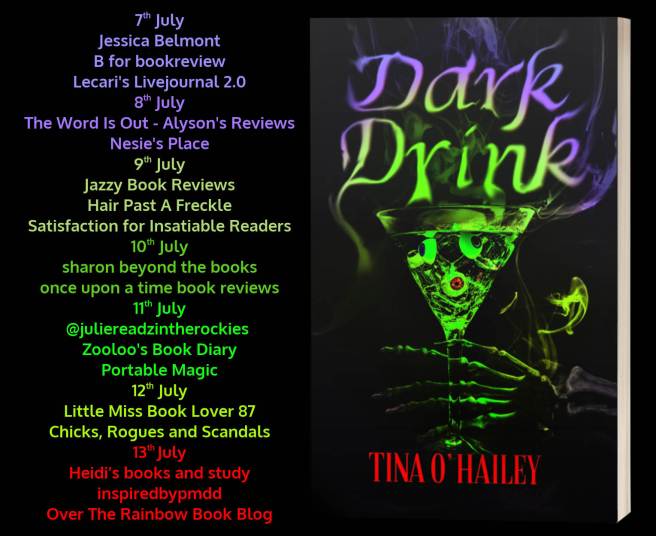