A weekend visit to picturesque Newfoundland by a large crew of outlaw bikers leaves behind another mess for Sgt. Windflower to clean up. This time, he’s facing violence, murder, mystery, and intrigue. This adventure has Windflower questioning everything he thought he knew. There are troubles on the home front, cutbacks in the policing budget, old friends leaving, and new ones not quite here yet. Windflower is seeking to find answers in territory that is both dangerous and unfamiliar.

This installment in the Sgt. Windflower Mystery series has our hero dashing all over the beautiful little island of Newfoundland. Along the way, he never wavers in his pursuit of justice. But he stills tries to find a way to enjoy the natural beauty that lays all around him, and to bring out the best from everybody he meets.

A Long Ways from Home is about more than just homicides or the dirty dealings of outlaw bikers. It is also about helping people and communities face up to and overcome new and very difficult challenges. Windflower relies on his friends and allies, including some four-legged ones, to help him and them find the answers. He also discovers that we are never really alone, even when we are a long ways from home. 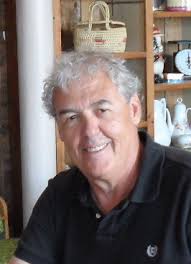 Mike Martin is the author of the award-winning Sgt. Windflower Mystery series set in beautiful Grand Bank. There are 4 audiobooks so far with more in the works. They include The Walker on the Cape, The Body on the T, Beneath the Surface, and the latest audiobook A Twist of Fortune.

Mike is Past Chair of the Board of Crime Writers of Canada, a national organization promoting Canadian crime and mystery writers and a member of the Newfoundland Writing Guild and Ottawa Independent Writers.

Francis G. Kearney is a former actor/performer, and aviator. He has worked on films & TV programs. He describes his evolution into narration and the joy of storytelling is the culmination of many years of a life fully lived and is reflected in a voice of experience.