She’s the pawn in their sibling game.

Latoya Brown is a big-hearted social worker with a secret K-pop obsession.

Her world is normal and safe. Until two hot brothers crash into her life and change everything.

One brother is her ex and a royal jerk.

The other is Cole. Bossy, brooding and hotter than an open flame in the tropics.

For a girl who hasn’t had a serious relationship in years, she’s suddenly got two offers.

But dating the man who shares her ex’s genetic code is a recipe for disaster.

Too bad Cole is as persistent as he is gorgeous.

Caught in his snare, Latoya knows one thing.

There’s no way this will end well.

The Ex Swap is a BWAM fake relationship romance, with a splash of humor, a dash of heat and tons of heart, set in the tropical paradise of Belize, Central America.

END_OF_DOCUMENT_TOKEN_TO_BE_REPLACED

It Was All The Cat’s Fault 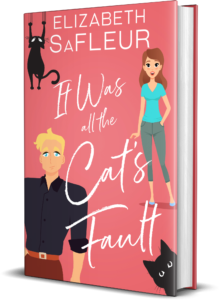 ~BUY It Was All The Cat’s Fault~ 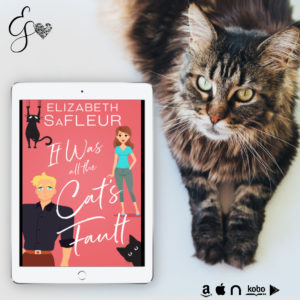 Eve can juggle work, school and a fixer-upper house just fine with a little help from YouTube. Well, she could, if her beloved cat, Thor, would stop getting into trouble—like getting stuck behind the walls. Thankfully, plumbers make house calls at ridiculous-o’clock in the morning.

Enter Brent who not only has all the power tools she needs, he looks like the God Thor. A mountain of muscle with movie-star hair, shining green eyes, and a perfectly scruffed, chiseled jaw. Just great. She doesn’t have time for all the lusty neediness rising where it should not be rising.

Eve reminds herself and her weakening knees that she’s a strong, independent woman determined to make it without anyone’s help. But as more renovation and cat-astrophes pile on, she finds her fingers doing the walking to call Brent to her rescue.

And she has to decide if keeping him at arm’s length fits her life plan, or if it’s the biggest miscalculation she’s ever made.

It doesn’t help Thor seems to be in cahoots with Brent when it comes to foisting romance on her. 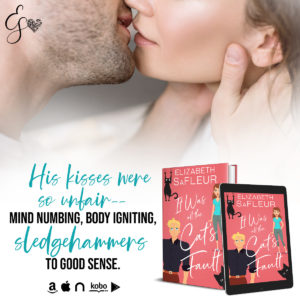 Elizabeth SaFleur writes award-winning, luscious romance from 28 wildlife-filled acres, which she shares with her husband and one very spoiled Westie. When not immersed in books she can be found dancing or drinking good Virginia wine—not necessarily in that order.

I’m pleased to share the cover for the final installment in the Vagrant Chronicles, Descendants by Janet Post and Gabe Thompson!

The Descendants (The Vagrant Chronicles #3)

From the award-winning authors of Vagrant and Mutant comes the long-awaited finish to the Vagrant Chronicles, Descendants!

Book III begins on Gliese where Shayna, Mai Li and Cain Hollyroad have taken over the leadership of the new colony. Shayna is worried because they’ve heard nothing from Declan and Logan. She decides to contact Earth using the equipment Eddie set up before he left. Unfortunately, when she succeeds and contacts someone she’s never heard of with the New LA Vagrants, she gets bad news. War has broken out in New LA and the Vagrant she’s contacted, a mole person named Reek running a small, solar-powered computer hacked into the Company’s com systems, he tells her most of the Vagrants are gone, hiding and shipped off to mining worlds. Reek doesn’t know Logan or Declan or any of the group from Gliese, and tells her the Vagrant space ship was destroyed. When she uses the equipment to piggyback off the Company’s Interstellar communication waves, they are alerted and come to find the colony.

Razor Tsang and his father are at the Gliese spaceport. They have an interview with the CEO. Razor’s father is the head of the Tong that has been the one sanctioned smuggling operation affiliated with the Company for decades. But the CEO, an alien who is a member of the ancestor race, laughs in their faces, denies them a new contract and give them twenty-four hours to clear off Gliese. Unfortunately for Razor’s father Big Lou Tsang, a group from the Smugglers guild meets him at his ship and kills him. Razor escapes and runs for the hills. He meets up with Shayna and her group and tells them what happened.

Cain Hollyroad leads colony members out of their valley and into the badlands of Gliese where there is no water and little hope of survival. Some of the colony gets caught by the Company and sent to the mines. Shayna, Cain, Razor, Mai Li, her daughter escape and begin a terrible trek into badlands searching for water. When all appears lost, Cain finds some caverns in a canyon which lead to an underground chamber with a spring. They need to get to a spaceport. Shayna is so worried about Logan, he concerns drive them away from their temporary shelter in the cavern and onward. They find the newest mining settlement. It has a rudimentary spaceport and a gigantic interstellar ship on the ground. It’s the ship they stole off the moon. Raj thinks he might be able to fly it. He has Helga. Knock reluctantly surrendered her control cube to him when he fell for Fenfang.

On Earth, Logan, Knock, Eddie and Fenfang are trying to fight their way, with the aid of the remaining Vagrants on Earth, to the Denver Spaceport where they hope to steal a ship to the moon where they can grab an interstellar ship and get home to Gliese. Logan is devastated by his father’s death. To find him and then lose him so suddenly was a huge blow.

The remaining population of Vagrants is wily and motivated to escape Earth. When they can’t contact Shayna, Logan becomes frantic. He lost his father and needs to know Shayna is safe and sound. Hounded by the Company and its new leader, a Company drone, frantic Logan, turns its eyes to smaller target, the spaceport in New Salt Lake City.

When Logan tries to contact Shayna again, he is stunned to discover she is traveling back to Earth on the Far Horizon. With the Company after them, the Guild discovers they are hiding close to their secret spaceport and moves in. Logan and his group hunker down and pray Cain, Shayna and Raj will arrive in time to save them.

I’m the daughter of a Marine Corps colonel. I lived the military life until I got out of high school. At that point I was a wild child. I got married and moved to Canada where I lived up the Sechelt Inlet, the scene for Spellcast Waters. I lived in a log cabin, with wood heat and a wood cook stove fifteen miles by boat from the nearest town. I’ve moved a lot. Between the military upbringing and just rambling around the country, I’ve moved 40 times.

I lived in Hawaii and worked as a polo groom for fifteen years. I love horses and I paint, and I write. Now I live in the swampland of Florida with too many dogs and my fifteen-year old granddaughter. Life is beautiful. Live in the moment.

My mother and I started writing young adult and action novels together about five years ago. We work well together because we share many of the same interests. I have a degree in journalism and currently teach middle school in Jacksonville, Florida where I live with my wife and twelve-year old son.

Obsessed – to be preoccupied or fill the mind with someone continually and to a troubling extent.
As soon as I realized she existed, I lost the ability to look away. She was always destined to be mine.
I’m Sebastian Lockwood; a king among men. And kings get to take what they want.
My little bird disagreed.
She fought me, disobeyed me even though we both know she belongs to me.
So I broke her, bent her to my will.
I pushed too hard, loved too much and she ran from me.
But letting her go was impossible. So I chased; hiding in the shadows, silently pulling the strings that would bind her to me.
Two years have passed, I’ve waited long enough. It’s time to reclaim my queen; to take what’s mine.
The trap is set, a gilded cage worthy of royalty and only I have the key.
I’ll make her pay for leaving me. I’ll make her love me, want me as much as I do her.
I couldn’t stop if I tried.
She’s my obsession.

From stepbrothers to mafia lords and rich elites who take everything for granted, they have one thing in common: their love interests hate their guts. But they’re kings and queens, and they’ll fight tooth and nails for what’s theirs.