Will a threat to London’s life lead her to love?

London Scott’s routine, boring life gets a jolt when her niece discovers a woman’s body while out hiking with her boyfriend. It’s just her luck, though, that it’s Sebastian Archer who investigates the murder. Having known the man since childhood, she’s always been the annoying tagalong. Even though she finds him drop-dead sexy, that’s a ship that can never sail now that she’s guardian to her niece and his goddaughter.

Two years ago, Seb moved home to take the position as local sheriff, ready for a slower pace and to be closer to his family. That included his best friend’s sister, London. The beautiful innkeeper had held his heart since they were young, but the timing never felt right to start something. When a serial killer murders a woman in his jurisdiction who bears a striking resemblance to London, Seb realizes he could lose her before they ever get a chance.

Will London’s reluctance to date the handsome sheriff deliver her into the hands of a psychopath?

Wildfire, Book 2 of The Broken Bow series, is coming soon! 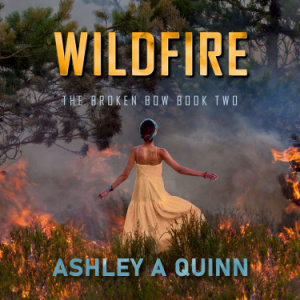 When not writing, you can usually find me with my nose stuck in a book or watching some terrible disaster movie on SyFy. I also love baseball, crafting, and cooking. I live in Ohio with my husband, two kids, three cats, and one very wild shepherd mix. Life is busy and I wouldn’t have it any other way.

After 20+ years as professional NYC actor, I stumbled into some documentary voiceover work. From that moment on, I knew the trajectory of my career had been changed forever. I adore narrating and doing VO, and every job feels like a gift.

Q & A with Author Ashley A. Quinn

How did you select your narrator?

From the beginning, Jenn did more to understand the characters than all the others who auditioned. She messaged me, asking for insights into their personalities before she recorded the audition script. I liked that she wanted to get it right from the start. And she did. Her audition was wonderful.

How closely did you work with your narrator before and during the recording process? Did you give them any pronunciation tips or special insight into the characters?

Were there any real life inspirations behind your writing?

The entire Broken Bow series was born from a photograph I saw of the ruins of St. Dominic’s Church in D’Hanis, Texas. It was haunting and beautiful. But—and this is how you can tell I’m a mystery writer—my first thought after that was how great of a place it would be to hide a body. The opening scene of A Beautiful End popped into my head, and I immediately opened a new document and wrote it down. Once I’d purged that from my brain, I fleshed out the rest of the novel in a rough outline and started writing. Suddenly, I had this whole new world full of these amazing characters. They’ve all been so much fun!

How do you manage to avoid burn-out? What do you do to maintain your enthusiasm for writing?

I truly enjoy writing. It’s not often when it feels like work to me. Some days, I just want to veg and do nothing more than watch YouTube and Netflix. When I get more of those days than not, I take a day off and pretty much do that. What drives me to keep writing and to continue to put out content is my desire to make a career out of publishing books. I’ve spent years just being a mom and a cancer mom, but now that my kids are older and my son is healthy, I want something for me. To build a piece of my life that’s independent from everything else. Something that is all me. And all for me—not necessarily the money that comes with it, because I definitely spend that on my family, but the satisfaction of accomplishing my goals and of being successful in this business. That’s what drives me.

If this title were being made into a TV series or movie, who would you cast to play the primary roles?

Sebastian would definitely be Josh Duhamel. His sarcasm and easy-going, funny personality is what I see when I write Seb. For London, I would pick Elizabeth Olsen. London is a little quieter and more serious than Seb, but still fun. Elizabeth also shares London’s looks.

What gets you out of a writing slump? What about a reading slump?

Writer’s block is the bane of existence for any writer. When I get stuck, I usually message one of my author friends and talk through what I’m stuck on. Or I call my mom and do the same thing. A lot of times, it just takes a sounding board to get me going again. Other times, especially when I feel like I’ve lost the direction of the story, I’ll sit down with a pen and a notebook and outline deeper into the book so I can find that again. As for reading slumps, I usually just wait them out. Eventually, my mind will get back into a place where books sound interesting again.

Song: “All is Well” by Avi Kaplan.

Movie: I don’t really have a favorite. There are a few that I could watch over and over again. Most of them are disaster flicks. I love the so bad they’re good SyFy disaster films. I also like the blockbuster disaster movies, like “Greenland,” “Geostorm,” “San Andreas,” etc.

Band: Not so much a band, but an artist. Avi Kaplan. He’s amazing.

City: I’m not really a city person. But my favorite place is the beach.

Are any of those things referenced in your writing?

Not directly, I don’t think, but they influence how I develop characters and plot lines.

What bits of advice would you give to aspiring authors?

Publishing takes a village, so find your village. I’m not talking just editors and cover designers (if you’re an indie). I’m talking other authors in your genre who get the struggle and can offer support and sometimes guidance navigating the industry. Join Facebook groups or talk to people on Twitter or Instagram. Make connections. It doesn’t have to be a lot, but writing and publishing is so much easier if you have someone who understands.

And don’t rush things just because you want to get your book out in the world. I did that when I first started publishing, and I’ve learned so much since then about marketing and making the books successful.

What’s next for you?

This year, I plan to finish my contemporary romance/romantic comedy series I just launched, publish more audiobooks in the Broken Bow series (at least two more for this year), and start a new romantic suspense series. I’d also like to start a mystery romance series about a female homicide detective.

One thought on “#AudioTour “A Beautiful End” by Ashley A. Quinn”