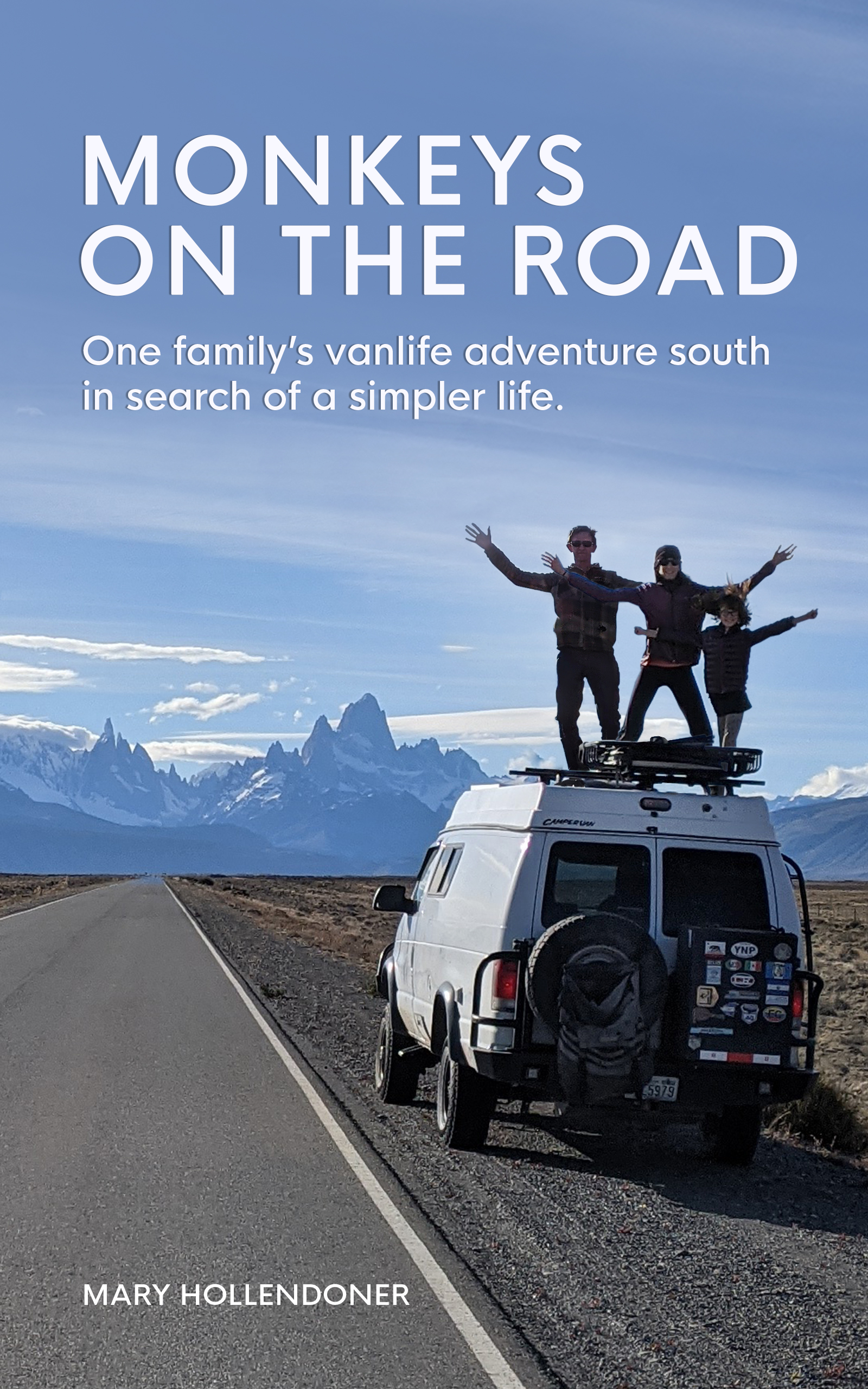 Thirty thousand miles driving from the USA to South America with a
6-year-old kid in a camper van. Will they make it?

After a decade in the corporate rat race, Mary was ready for a change. Too much stress and not enough time with her family left her feeling that her priorities were all wrong.

They quit their jobs.

They pulled their six-year-old daughter out of school.

And they moved into an old camper van to attempt a drive to the southernmost tip of the world!

Surrounded by an angry mob in Mexico, threatened by exploding batteries in Colombia, caught up in a political revolution in Bolivia – they grew closer as a family as they navigated through adversity. But what stuck with them the most was the endless generosity of the local people, from whom they learned invaluable lessons about happiness and priorities.

Will they survive whale sharks, police searches, and volunteering in local schools? What happens when COVID hits?

Find out in this heartwarming read about a family trying to find their
place in the world.

I climb up into the passenger seat of our big white van and click my seat belt with trembling hands. My heart is pounding like a drum in my chest. I take a deep breath and turn to look at my husband, John, in the driver’s seat. His grin is enormous, with just a touch of nervousness around his eyes, as he turns the key in the ignition. I don’t know whether to laugh or cry… I think I do both.
Are we really going to drive thirty thousand miles across 20 countries? Will we make it? What will we do next?
Our six-year-old daughter, Lilly, simply looks out the window and says, “Okay, let’s drive to Mexico.” Like it’s just another day!
On top of the excitement and nerves, I also feel relief. Relief to finally be on our way, after years of intense planning and preparation. It’s like I’ve been standing at the top of a cliff, anxiously waiting to jump into a beautiful pool below me, and am finally free to just do it and stop worrying. But then again, the free-fall is the most terrifying part of the jump.
Only two weeks ago I was getting cold feet. John and I had already quit our jobs, rented out our house, and missed enrollment for the next year of Lilly’s public school. But I was obsessively reading the news from Mexico, getting more and more concerned.
Highest number of homicides in 20 years! Mass graves discovered next to the road! Decapitated heads found in a cooler! Tourists poisoned at resorts! Are we completely insane to drive into this country with our little girl? I marked the dangerous areas on a large map of Mexico, assuring myself that we could weave a path around them.
But then, along came an abnormally strong set of hurricanes, hitting Mexico on both sides of the country. I don’t want to imagine hunkering down in our little van, arms wrapped around Lilly in futile protection, while a hurricane bats us around. So I convinced myself hurricanes could be avoided by keeping a close eye on the forecasts.
And finally, only one week before we planned to cross the border, there was an 8.2 magnitude earthquake with epicenter in southern Mexico! It was the largest earthquake to hit Mexico in a century. Is someone trying to tell us something?
What if Lilly gets seriously hurt, or kidnapped by Mexican drug lords? Or we have a car crash, or the van is stolen? Or what if we survive the trip but then we can’t find jobs when we return to the US? Or, one of us gets cancer and we can’t get US health insurance? There are 101 reasons not to do this trip, and I started thinking about all of them.
Ultimately, I turned to logic and probabilities – yes, it is possible that any of those things happen to us, but it’s more likely they won’t. The most likely outcome is that we’ll grow old and hope to have lived the lives we wanted. So we made the uncomfortably exciting choice to leave our safe path and venture into the unknown.
I remind myself of this as I turn around to check Lilly is buckled correctly into her car seat. For the third time.
We finally bump down the driveway away from our home, memories flooding past our windows, as the neighbors wave and cheer us on. My head is swimming with the to-do lists from the past few months, but at this point, it no longer matters what we forgot to do or pack or research. We are driving to South America! No turning back!
One mile down the road, I sheepishly turn to John, “I left all of our food in the fridge back at the house.”
And thus begins our journey of 30,000 miles. With a U-turn. 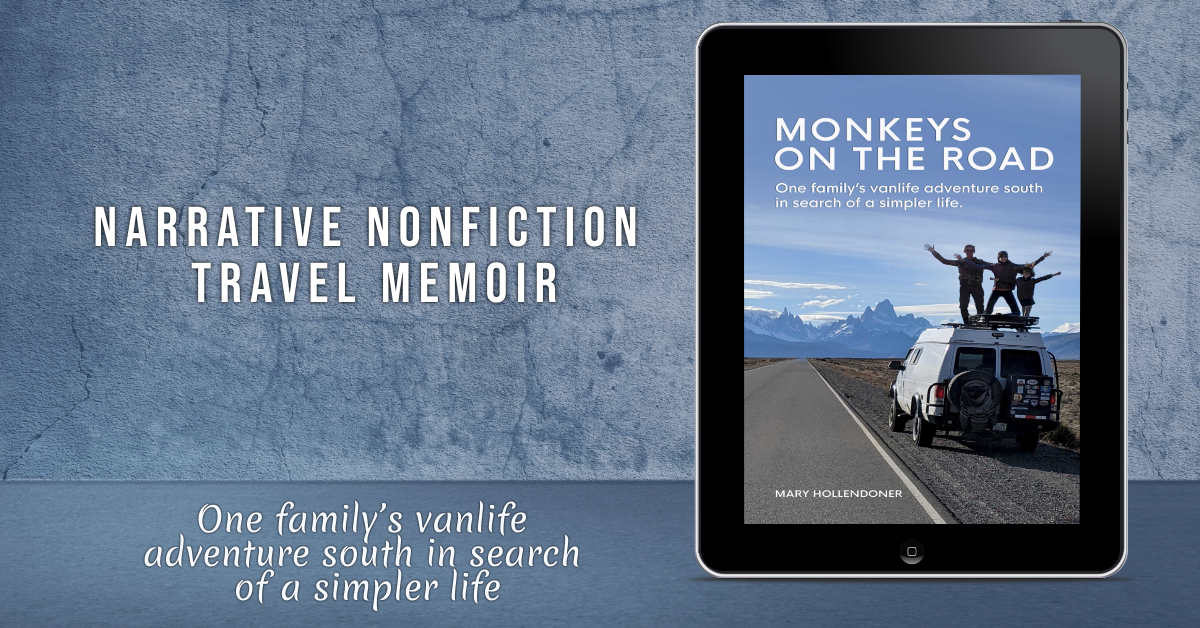 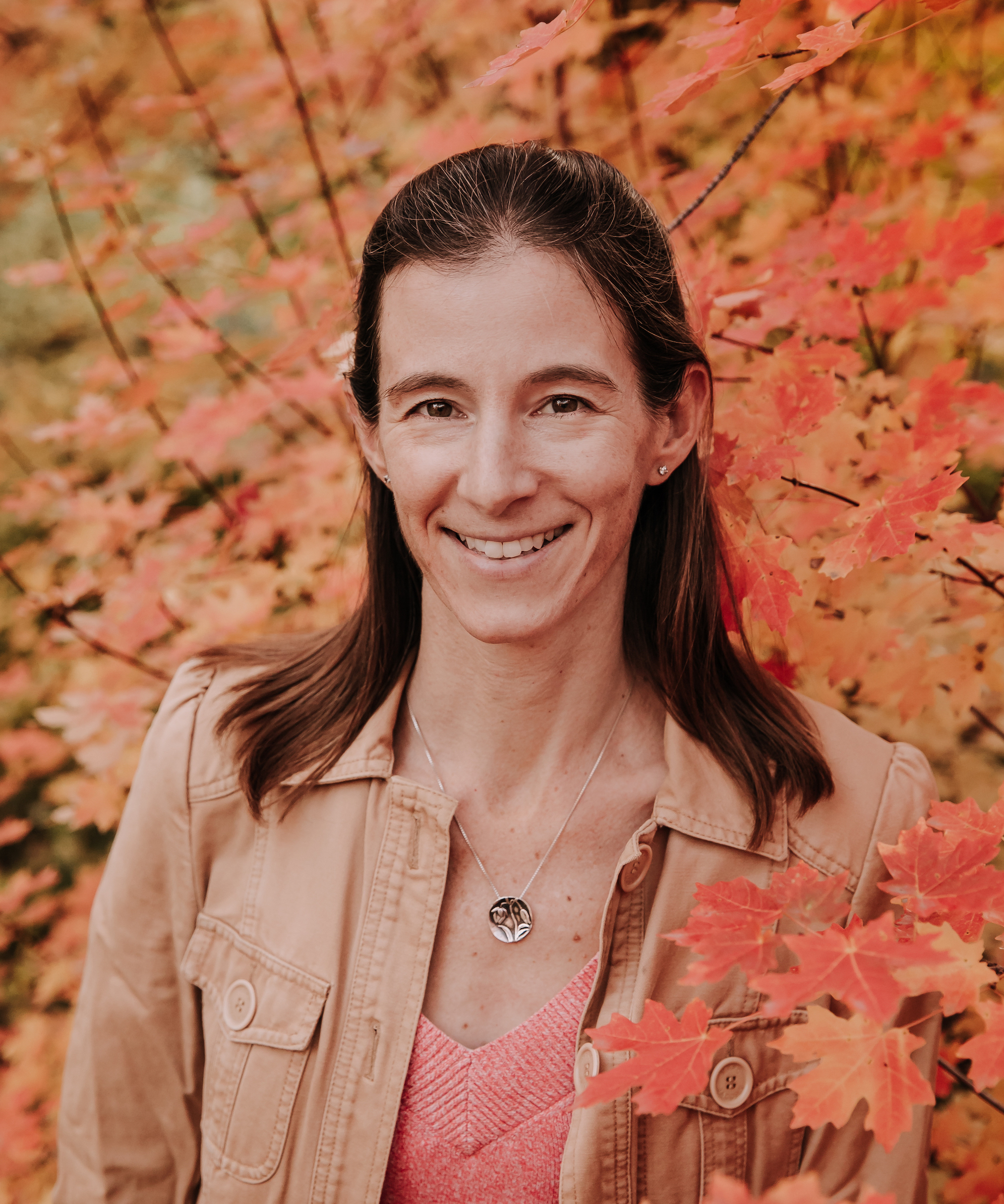 Mary is passionate about travel and the outdoors. Originally from England, she moved to California for its rock climbing and sunshine, worked a season on the Yosemite Search and Rescue team, but then ended up climbing the corporate ladder at Google for a decade to fund her travel obsession.

She has bicycled across Central America, motorcycled across Mexico, driven the length of Australia, and backpacked around Europe, S.E. Asia, and Africa
– all as a prelude to the epic drive through the Americas that is the subject of this book.

She’s written for travel, climbing, and retirement magazines, and this is her first foray into a full-length book.

One thought on “#Excerpt “Monkeys on the Road” by Mary Hollendoner”