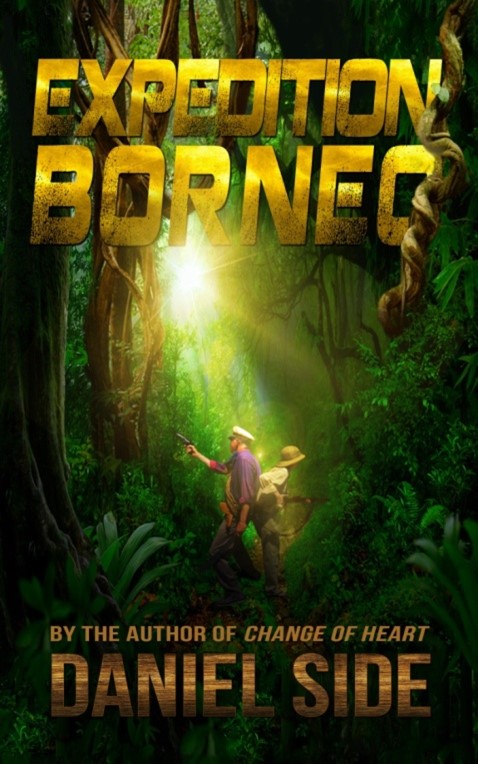 Jake Bennett knew a couple of things for sure: he needed a job, he didn’t want to die in the jungle… but he’d never met anyone like nurse Brockman.

The two clash when Jake discovers that Katherine Brockman’s mission has nothing to do with checking the condition of malaria in native villages.

The possibility of saving tens of thousands of lives unites them as they venture into the steaming jungle to discover if the “Legend of the Riverman” is true.

Soon, the dangers of the jungle wrapped in the unforgiving heat, threatens to end, not only their mission, but their lives.

But nothing can prepare them for what they discover, hidden deep in an unexplored jungle basin.

A DAY OF TRAVELING

Tam watched Jake and Katherine paddle towards him and Munroe. Fisher and Greenwood’s dugout was close behind them. Tam liked the spot he had found. It was a small clearing on the edge of the river, created by slabs of rock, similar to those at the head of the last set of rapids. It would be easy to unload the dugouts and there was a view for fifty feet before the jungle started. A few large rocks would provide protection if needed. He watched Jake as he approached. He was scanning the bush on the opposite side of the river.

“You see too?” Tam whispered as they glided up beside them. Jake nodded. “You think this good place to eat?” Tam said, loud enough for all to hear.

“Yes,” said Jake. “Let’s hurry and get some lunch. I’m hungry as a sun bear.” They climbed out of the dugouts, Jake casually slinging his rifle over his shoulder.

“Okay, it looks like it’s time to get dirty. To take the dugouts further is a waste of energy. We’ll spend the rest of the day here and organize for switching to foot travel. Everyone start unloading while Tam and I discuss the details of our switch to land.”

Tam watched Tanum. She went about her business, but he saw that she was constantly viewing the surroundings, especially across the river.

“Tanum see something,” he said to Jake.

“Yeah. I didn’t see anything but something was moving over there. Good spot you chose macha. Good sight lines.”

“I don’t know yet. Let’s stay here for the rest of the day. Say we have to re-organize for tomorrow. It’ll give us a chance to see if someone is over there. Maybe we even try to take a look ourselves.”

“You too clumsy in jungle, macha,” said Tam.

Jake smiled. “I was thinking more like you and Tanum.”

They had erected the tents in the middle of the clearing close to a couple of large rocks. Tanum and Tam ventured out, moving slowly upstream in a dugout. They tied up and cautiously explored. On the other side of the river in the underbrush, they found a path, similar to the one on their side of the river. Tanum thought they were animal paths. They didn’t find any trace of natives.

“You’ve been hugging that rifle all evening, Jake,” said Fisher. He sat with his legs stretched out, his back against a rock, finishing the last of his coffee.

Tam looked at Jake, wondering what he would say. Of the three men, Fisher impressed Tam the most. Thin and wiry like himself, he seldom tired and never complained. He thought that if anyone else had seen the motion, it would be him.

“Saw something, don’t know what. Movement in the underbrush the other side of the river. Might’ve been something, might’ve been nothing. Best to be careful. Haven’t seen anything since we’ve been here. Tam and Tanum didn’t see anything either when they went out.”

“We haven’t seen any natives so far. Is that usual?”

“Don’t really know. Never been this far before. But my experience has been that if they don’t want to be seen, you won’t see them. Just like the animals,” Jake answered, throwing the last of his coffee into the fire.

“Been thinking on it. Best to be careful.”

“I would be willing to take a turn if needed,” Fisher said.

“Thanks for offering. I’ll have Tam sit up a while, in our tent so as not to be obvious. I’ll take over for him. If I feel it’s necessary to continue, I’ll come and wake you.”

“Very good. In that case I’ll get some sleep. Good night.”

Jake sat under the mosquito netting, peering out of the opening of their tent. It was a cloudless night, the moon lighting up the gray shale around their camp. He leaned his rifle against the tripod that held up one end of the hammock. Tam had awakened him with no sightings and, in the last two hours he hadn’t detected anything. He walked to the hammock and arranged the net around it. Drawing the Webley, he lay back. Within minutes he was asleep.

Fisher emerged from the tent and glanced over to where Jake sat by the fire with Katherine, Tam, and Melor. He yawned and rubbed his face. “Morning.”

“Coffee?” asked Katherine. “Made it myself.”

“Aren’t you turning into a proper domestic. Got to visit the loo first.” He looked around. “Where’s Robert?”

“No. I assumed he was up and about. Just Thomas in the tent. Maybe Robert’s off taking a pee.”

Jake stood, scanning the edge of the rock where it met the jungle. “We’ve been here for a good half hour. It doesn’t take that long to piss. Tam, grab the rifles. We’ll take a look. The rest of you stay here.”

“I just sent her out to hunt. We could use…” Jake stopped as Tanum emerged from the jungle. Her face was grim, eyes focused on Jake.

She stopped in front of him. “Come.”

Tam handed Jake his rifle. “Tam, you stay here with Katherine. William, get Thomas up and come back here with your rifles. I’ll be right back.”

Tanum led him into the jungle, moving cautiously, her eyes searching the foliage as they walked through the underbrush. It thinned out after thirty feet and Jake spotted something ahead.

Munroe lay on his back. His head was missing. 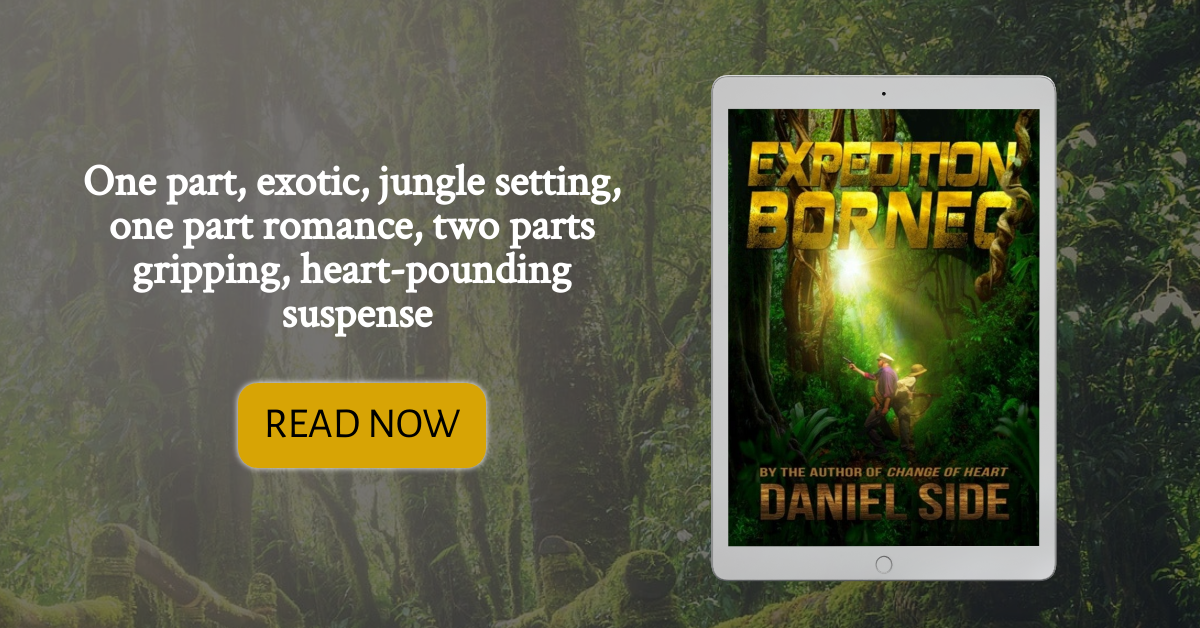 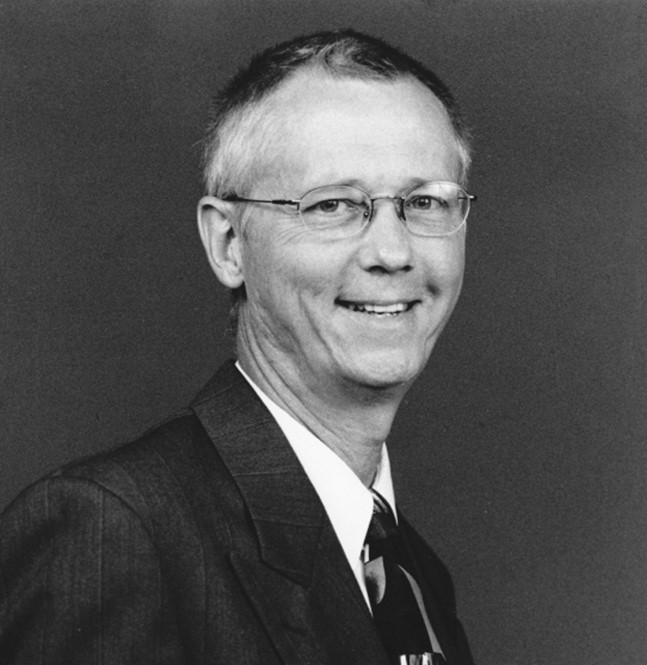 An avid reader as a youngster, Daniel began a teaching career at twenty, peppering his life with trail rides on his horse Kelly, scuba diving in the murky Great Lakes of Ontario and taking fencing lessons.

He married Lynda, five months after they met in a bar on a Thursday night. With her, he raised a family, wrote and produced school plays, built their log home, restored a classic Mustang, a ’69 Mach 1 for enthusiasts, and took their three boys on many canoe trips in northern Canada.

Twenty years later, unable to find a science fantasy adventure he liked, with encouragement from Lynda, he wrote The Reedsmith of Zendar. Expedition Borneo is his sixth novel.

His books are varied, but whether suspense, a thriller, or an adventure story, all contain characters in trouble that you will care about and root for. He’s never perfect and neither is she, but the attraction is inevitable as they learn about each other on an adventure seldom of their choosing.

One thought on “#BookTour “Expedition Borneo” by Daniel Side”