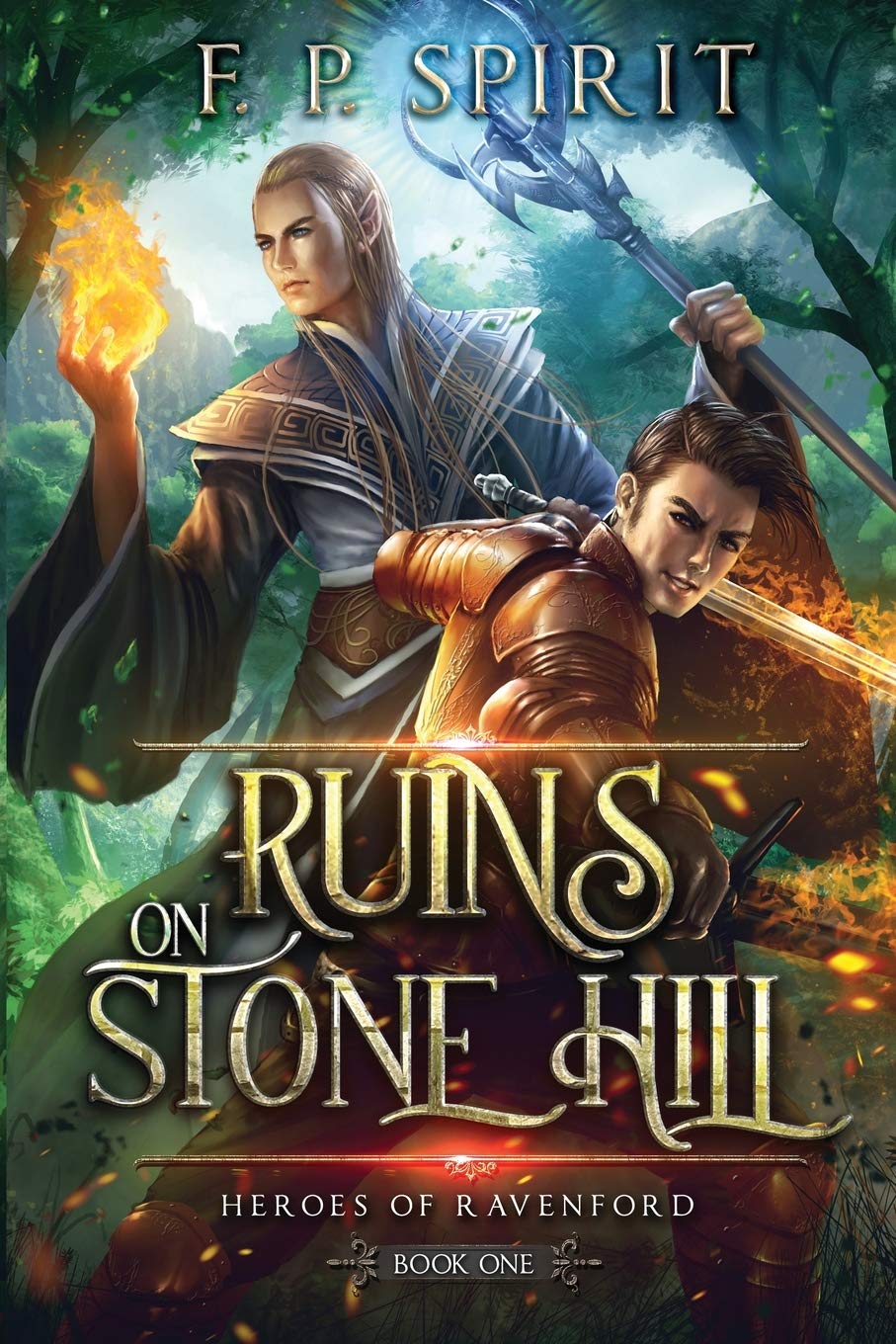 What do you get when you mix a novice wizard, a reckless warrior, a sharp-tongued thief, & a saintly cleric? Swords, sorcery, & sarcasm.

They didn’t set out to be heroes, but the little town of Ravenford was in desperate need. Before Glolindir and his friends knew it they were facing fierce monsters, deadly assassins, black mages, cunning demons, powerful dragons, and even the remnants of the dread Thrall Masters themselves. Will they be able to live up to the challenge, or will they fall and leave Ravenford at the mercy of the forces of darkness?

The aged ash trees reached toward the sky. Glimpses of deep blue peeked through the treetops, the light of the afternoon sun barely penetrating the dense forest foliage. The fresh scent of the surrounding trees and bushes, mixed in with the earthy aroma of grass, wafted on the cool crisp air. A trace of dust lingered, churned up by the wheels of the wagons that had traveled the well-worn dirt road, cutting a path through the looming forest.

Other odors also rose from the earth: the musky, warm smell of horses, the heady memory of wine, some pungent herbs, and dried hay. These scents were attached to a group of travelers. Horses pulled wagons filled with boxes, barrels of goods, and beverages that the caravan owners were carting to their destination. The wagon floors were lined with hay in a vain attempt to make passengers more comfortable.

The clip-clop of horse hooves, the squeaking of turning wheels, and the creaking of wagons announced the caravan’s presence along the dirt road. Bright-voiced birds and rustling leaves accompanied its passage through the forest.

Glolindir sat in one of those wagons on a pile of hay—his back propped against a box of goods with his cloak thrown over it in an attempt to make the seat more comfortable. Being an elf, Glo did not look much different from a human. Standing at about six feet tall with flaxen hair, blue eyes, and fair skin, he was perhaps a bit thinner than most humans, but the only trait that gave away his heritage was his pointed ears.

Glolindir had been lulled into a half-trance by the rocking motion of the wagon, and the soft sounds of the forest. The young elf was quite content, until he realized that something was different. There was a subtle change in their surroundings, but he could not quite tell what it was. He opened his eyes and gazed around, straining his senses.

His friend, Aksel, was doing the same. A few minutes ago, the gnome had been lounging across from him on a second pile of hay. Now Aksel was standing up, his three-foot frame tensing as he listened with his own pointed ears.

They were both transfixed, trying to place what was amiss. Aksel gazed at him. Glo shook his head at the silent question that passed between them. They were missing something obvious, something that was just at the edge of their awareness. Both friends turned to gaze at Seth.

The halfling sat in the front of the wagon next to the driver. His small frame, just barely shorter than Aksel’s, was dwarfed next to him. Seth’s head was slightly cocked as if also listening.

Listening. That was it! There weren’t any forest sounds. The birds had stopped chirping their songs, and even the rustling of leaves had died down. Glo continued to strain his ears, but the surrounding woods remained quiet. He opened his mouth to say something when a strange sensation washed over him. It hit him like a crashing wave, making every nerve taut. His heart raced, sweat gathered across his brow, and he felt a bit light-headed.

Aksel must have noticed his sudden change in condition. “Are you alright?” Glo ignored the gnome, his eyes darting from side to side. He searched for any sign of danger, yet saw nothing to warrant such an intense reaction. What is causing this sense of dread? It suddenly dawned on him—it was his familiar, Raven. He was linked empathically to the tiny magical beast, and these feelings of fear were coming from her!

Glo stood up and poked his head out of the wagon, looking up into the trees. Where is she? He scanned all around, his heart still pounding. There she is. He spotted her up the road ahead of them, winging her way back in a state of utter panic.

Aksel’s head suddenly appeared next to him. “What’s going on?”

“It’s Raven. Something has her really spooked—something on the trail ahead.”

Aksel raised an eyebrow. Seth’s eyes narrowed. Even the wiry old wagon driver knew something was wrong. He glanced over at Glo and said, “Son, you don’t look so good.”

Glo steadied himself. “I’ll be fine.”

They scanned the woods ahead, three pairs of keen eyes scrutinizing either side of the trail.

“Over there!” Seth pointed up ahead off the trail to the left.

Glo focused in on the spot, but at first saw nothing. Abruptly something moved. It looked like the top of a bow. Glo strained his eyes, trying to get a better look. Is that an arm? Yes, he saw an arm—a bare green arm. It was sticking out from behind a bush and holding a drawn bow with a nocked arrow. As he continued to watch, a gust of wind briefly blew the bush aside. For just an instant, he got a look at a face.

It was not quite human, but brutish, almost monkey-like with green skin and two short tusks protruding from the lower jaw. Glo was momentarily startled. He’d seen such a creature before, but only in books back home. That’s an orc! A wave of nervousness passed through his body. Orcs were nasty creatures—carnivorous humanoids who did not mind feeding on the flesh of people. They were all in grave danger.

Aksel and Seth must have seen it as well. Aksel let out a soft gasp, and Seth’s eyes went dark, a twisted smile crossing his face. Glo pushed down his rattled nerves, and took a deep breath.

His voice startled the driver, and the man nearly fell out of his seat and off the wagon. He recovered and pulled hard on the reins, bringing the wagon to a complete halt. The driver then turned, dove into the wagon, and crawled back behind the barrels and boxes.

The reaction had caught Glo by surprise. He tore his eyes away and peered out ahead of them. The other wagons had also stopped. Aksel distracted him yet again. “Where did Seth go?”

In all the commotion, Seth had disappeared. Glo scanned the area, his heart pounding in a frantic rhythm. He finally caught sight of Seth stealthily crawling under the stopped wagon in front of them. He was about to cry out to him, when a whizzing noise came out of the forest. Glo instinctively ducked down into the wagon, Aksel beside him. A split second later, two arrows embedded themselves into the seat above. Both elf and gnome flinched at the sight.

Glo swallowed hard. “I think he’s headed toward the front of the caravan!”

Glo silently hoped that Seth knew what he was doing.

Aksel mirrored his thoughts. “I just hope he knows what he’s doing.”

“He was well-hidden beneath the wagons.” Though he tried to sound comforting, Glo was equally worried about their friend. In fact, he was concerned about all of them. Orcs were not creatures to be trifled with. This was a deadly situation—one they just might not survive.

All of the books in the Heroes of Ravenford series:

An army of darkness. A group of young heroes. A town hanging in the balance.

A cult of black mages and demons. The secret to the Thrall Masters’ terrifying power. A desperate race to find it first.

An insane princess who wants to rule the world. A magical artifact of terrifying power. A deadly struggle to possess it.

A brutal murder. A missing heart. A race against time and death. 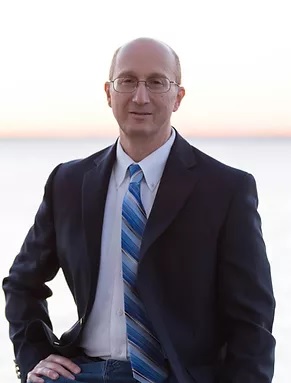 F.P. Spirit is an avid science fiction and fantasy fan. A Trekkie before it was cool, F. P. became hooked on fantasy the moment he cracked open his first copy of Lord of the Rings. When he is not lost roaming the multiverse of sci-fi and high-fantasy fiction, F. P. is either creating adventures for his roll-playing friends and family or connecting with his mind and body in an attempt to reach that inner spark of spirit.

One thought on “#BookTour “Ruins on Stone Hill (Heroes of Ravenford Book 1)” by F. P. Spirit”