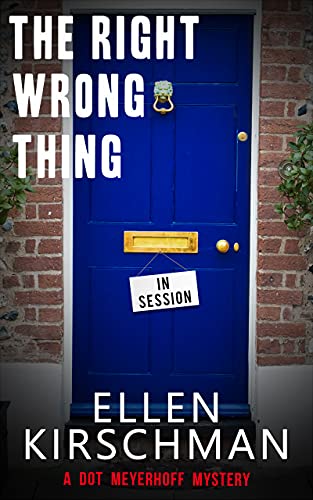 A SPLIT-SECOND DECISION, A DEAD KID.
AND A HEARTSICK COP…

An unfair fight — gun vs. cellphone. A rookie cop shoots an unarmed pregnant teenager in a high-adrenaline situation. Her fellow officers call it “a good shoot”.

But the rookie, a young woman named Randy who is still on probation, is racked with guilt – and self-doubt.

Police psychologist Dr. Dot Meyerhoff’s job, however, is not to determine guilt, but to keep Randy from unraveling. After losing her very first police counseling case to suicide, Dot is working 24/7 not to lose another officer.

As one of only two women in the department – which is a whole other bag of cats – Randy’s unpopular. And Dot has to tiptoe through a testosterone-dominated culture, fraught with personal agendas, political agendas, and PTSD.

Ever insightful and empathetic, she walks a fine line between supporting her officers and staying out of their investigation – until she crosses it. And once she steps from “assessing state of mind” to “collecting evidence”, she’s never been so close to not coming home.

And at the moment, home’s a great place to come home to. The 24/7 demands of her job are straining her relationship with the kindest man she’s ever known. The department calls at the most inopportune moments, and she’s off like a prom dress in May. A good man won’t wait forever and Dot has to wonder – should he have to?

This psychological dance with good old-fashioned detecting will appeal to fans of Jonathan Kellerman, Stephen White, Val McDermid, Abigail Padgett, as well as to readers who admire all smart, thoughtful women sleuths.