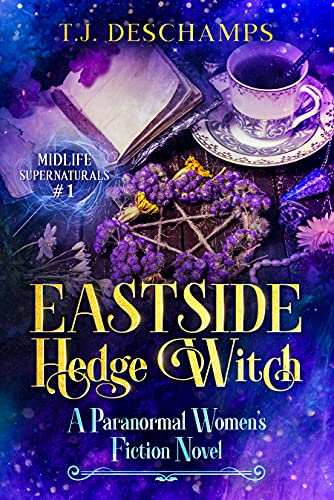 Twenty years ago, I stole something that could win the war between Heaven and Hell. Don’t get me wrong, I’m no do-gooder. I wanted to rule everything with the King of Hell. However, I have serious qualms with killing 8 billion people in order to get what I want. He didn’t. Irreconcilable differences, right?

So, I did what any witch would do. I faked my death and hid out in the Seattle suburbs, living as a mundane. Stay at home moms are practically invisible here!

I had a good thing going until a hellhound showed up on my morning run. Guess you can’t thwart the devil’s machinations and get away with it forever. Time to come out of the supernatural closet and save the world. Again. 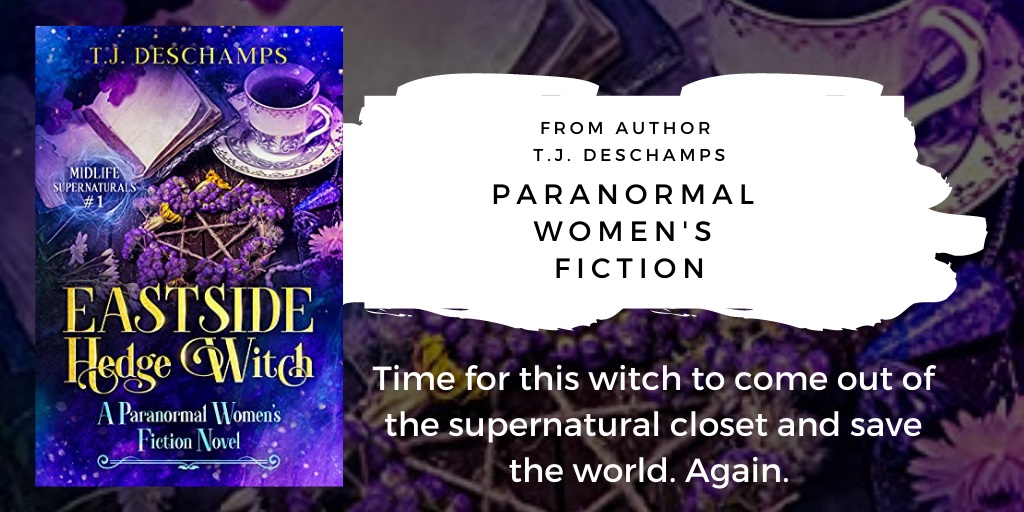 No one expects to run into a hellhound on their pre-dawn run in the Seattle suburbs, not even me, and I’ve had a long history with the stinky mutts and their master. I stop dead in my tracks, my heart thudding faster than the beat in my earbuds. After pressing the bud in my right ear, the music ceases. Ambient noise filters in.

Luck is on my side, sort of, as I am downwind of the monster, not the other way around. The reek of sulfur was what had given away the hellhound circling my neighbor’s begonias long before I spot the glowing red headlights where eyeballs should be. Besides the glowing red eyes, there’s no mistaking the hellhound for a lost pooch or a coyote on the prowl. The arch of its back reaches about as high as my chest, and I’m about 5’6″, not tall but not short either. It’s three times as wide as my hips, and I’m, as my daughter’s generation puts it, “thicc.” Under a sleek coat of slate-gray fur, sinewy muscles ripple. Even without looking inside its muzzle, I know viscous slobber covers several rows of razor-sharp teeth. But what really gives away the doggo is not a helpful Lassie are the shadows, darker than dark, swirling about the killer canine.

Those shadows will suck you into a whole new world. Somewhere you don’t want to take a magic carpet ride, Aladdin, not one little bit.

Too busy sniffing at my neighbor’s hedges, likely distracted by a bunny, the hellhound doesn’t even realize I’m there. I don’t mind if the demonic beast eats Peter Rabbit, the circle of life and all that, but I sure as hell mind if the hound tries to devour me, or worse catch me up in those swirling darker-than-dark shadows forming around him.

My stomach knots with unease and I bite my bottom lip to keep from crying. I’d grown complacent over the years since I left Hell. I want to stomp my foot and cry out that this isn’t fair. I’d gotten away from His Creepiness and all his bullshit evil machinations a long time ago. I have a nice, albeit bland, life in the suburbs. I’m on the freaking Parent Teacher Student Association!

I give up my pity party. I am a middle-aged mom, not sixteen. I’ve known for a long time that life was never going to be fair, as life never is when someone has way more power than you have.

I’d grown complacent, but like all middle-aged mothers, I still came prepared. I’d thought I was safe from Hell, but the world is filled with a lot more things that go bump in the night than hellhounds. I ease off my backpack.

My kid likely thinks I carry around weights, tasteless nutrition bars, and a water bottle like a normal person. The water bottle is the only true part. What I do have in my bag stops all kinds of monsters from devouring me while I get my heart rate up to “cardio” on my smartwatch. I push aside ash and rowan wood stakes, a silver dagger in its sheathe, a jar of cream to distract fae—not that the high fae courts are even allowed on Earth after the angels kicked them out, but the tiny low fae love the stuff and keeps them on your side.

Among these contents, I retrieve a container of Morton salt, tear off the sticker, and flick the spout with my thumb. My stomach dips when the friction causes the metal of the spout to squeak against the cardboard of the container.

My gaze still on the hellhound, who is still tearing up my neighbor’s garden, I exhale in relief.

With great care, I pour the salt in a circle, whispering the words I’d learn by rote. I’d learned them in another tongue but say the spell in English—a focus, the actual words don’t matter. The intention does. The power comes from within me, as it does all witches. I contain a metaphorical light inside that can blaze with the brilliance of a thousand suns, or so my mother said.

Mom was more poetic than I could ever be. She read Ralph Ellison, Alice Walker, and other greats of the twentieth century. I read comics and listened to Biggie and Wu-Tang Clan. She belongs to a coven. I am a lone witch, living a continent away from the women who raised me. Generational disconnect happens to the supernatural, too. Especially when your mother gave you to a fallen angel as a tithe when you were only a teenager.

When I’m done with the setup, I return the salt to my backpack and steel myself for what’s to come next.

I whistle. The first comes out dry and soundless. I moisten my teeth and try again. A shrill sound, loud enough to wake the dead let alone the neighborhood, departs from my lips.

The hound pauses the search for the rabbit, lifting its head. Alert. The beast’s nostrils flare as it sniffs the air. Red glowing eyes lock onto me.

A low growl emits from the beast’s throat. Claws the length of my fingers click on the sidewalk as the hound stalks forward toward me.

Inside, I’m quaking with fear. I have not done this spell in a long time. If something happens to me, my daughter will have no one. I push that out of my head and plant my hands on my hips.

“Go tell your master take the hint and leave me alone.” I point as I speak, not intending a literal destination but a general begone direction.

The idiot looks where I pointed.

I roll my eyes. Hellhounds are not like Earth dogs. They have no instinct to protect, but they have the same instinct to hunt and follow signals. When the evil pooch realizes his master isn’t there, the predatory red gaze narrows on me, but it doesn’t move.

Doubt and confusion sets in. I’m not sure why he’s not pouncing and dragging me back with him to Hell nor ripping me to shreds. Am I not its target?

I curse under my breath.

I clear my throat. “Also, tell him stalking is a little gross and so creepy that he’s still got a thing for a me. I made it pretty clear I didn’t want to be with him anymore.” I throw up a hand and shake my head. “Wait. Why am I telling you? You’re too stupid to deliver a message.”

I spin on my heel like I’m going to walk away. Part of me wants to run. Wants to lure this beast away from my home, my kid.

The movement triggers instincts. In my peripheral, the monster snarls and lunges.

My heart leaps into my throat. The creature is doing exactly what I want it to do, however, a massive hellhound is launching in my direction. That and swirling magic that promises to rip me from everything I love to carry me to my least favorite ex scares the bejesus out of me.

After a moment of frozen terror, my brain revs into gear. I find my voice, murmuring the final words of the spell. A silly little rhyme stammered more than said—but stammered with intention!

The ground shakes beneath my feet, rumbling like a thunder cloud. Within the salt circle I’ve created, a swirling vortex appears. Fire erupts from the center, but I don’t feel the heat. It’s all contained by the salt I bought in a three-pack from Costco. The beast snarls and whines but cannot escape the flames toasting its flesh.

Oopsy. I’ve opened a portal to a less hospitable part of Hell. Guess this hellhound won’t be delivering my message.

I murmur another spell, voice still shaking. The swirling vortex sucks the hellfire and burning beast down like a flaming turd down a flushed toilet.

The portal between worlds vanishes, leaving behind my salt art.

Sweat cooling on my body and adrenaline waning, all I want to do is go home and shower, but I need to clean up the salt first. If I left it, Seattle’s infamous constant drizzle would wash the salt into the neighbor’s yard and kill all the plants.

Television and movies with demon slayers never mention that salt will kill plants if absorbed into the ground. The ostensible heroes walk away from their salt circles, leaving a destructive mess, not caring whose yard they’ve destroyed, but I do.

As I sweep up the salt circle with a pocket-sized dustpan and broom, dumping the contents into a Ziploc bag, a sadness envelops me. I’d found safety and community on the Eastside—albeit while pretending I was something I was not. I don’t want to move again, but I have to.

The thing is, you don’t just leave my ex and get to live happily ever after, not after he’s shared his ambitions. Not after he’s named you his Harbinger of the Apocalypse. I’d only deluded myself that I could.

His Creepiness had once said that he’d tear the heart out of anyone whom I loved more than him, so they’d know how he felt. I used to think of the declaration as terribly romantic, instead of simply terrible. I certainly loved my daughter more than I ever loved him. Would he kill her or try to use her for the purpose he wanted to use me? New fears arise.

With the salt all swept and bagged up, I head to my house with a heavy heart. The life I’ve built here on the Eastside is over, and I have to break that, and so much more, to my daughter. 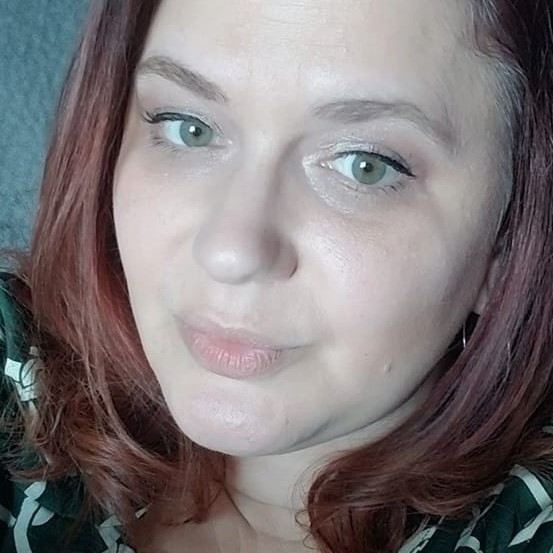 T.J. Deschamps lives in the Pacific Northwest of the U.S. with her three teens, two cats, and a tortoise. She loves to read, write, dance, and lift weights–not at the same time, although that’d be cool to see.