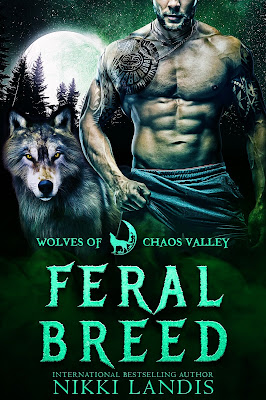 It’s not unusual for tensions to run high in the tiny town of Morningstar where humans and wolf shifters reside together. Nothing and no one has been able to overcome the years of mistrust, hate, and attacks, and recent murders of humans, along with the approaching Chaos—the wolves’ mating season—is only making the situation worse.

Quinn, head alpha of four packs, keeps his clans in line, but it’s the rogue wolves living on the town’s periphery, that are the problem. This includes Vandal Reid; the wolf Quinn has been on a nine-year mission to kill.  Vandal is responsible for the death of Quinn’s father and the scaring of his mother. He has no thoughts of mating or raising a family… only revenge.

Until his hunt for the killer wolf leads him to Tess Warner.

This quick, steamy paranormal romance takes familiar elements of the shifter world and spins them just enough to make this read unique!

Loved the well-written characters of gruff, frustrated Quinn and laid-back, free-spirit Teague, Tess’s kid brother. They’re the perfect blend of push and pull in the story that kept Tess off-center. But it’s Tess who gets the favorite character nod. The young herbalist runs the successful family business handed down to her and takes care of Teague. Period. She walks the fine line between humans and shifters and will not be bullied or bossed around.

I would like to have known more about her background that Quinn senses, but to be fair, this is the only book in the Wolves of Chaos Valley series I’ve read, so I don’t know if characters/story lines are interconnected in previous books. I was also annoyed by her one TSTL moment, but she was being a good big sister and friend and quickly won me back over with her fight-to-the-end spirit.

It’s a good read that has me considering the rest of the series and Haunted Wolf. Don’t miss the sneak peek of this one after Feral Breed.

We don’t share drinks at the bar, shop at the same stores, or even live in the same part of town.

There’s no trust, just decades of superstition and haunting rumors of a dark night only spoken about in hushed whispers.

I know what everyone fears.

After all, my shop is located in the center of the city.

When people want natural and herbal remedies, they come to me.

My family has helped the people of Morningstar for generations.

I hate the shifters as much as they do.

When the handsome alpha breaks into my shop and hurls accusations, I’m determined to set him straight . . . until all hell breaks loose.

It’s my responsibility to ensure my clan is protected from the humans.

Four packs that rely on the Hogan brothers to keep their secrets and families safe.

Years of mistrust, lies, and carnage have placed a wedge between my kind and the humans.

Just when I have it all under control a new threat emerges.

It’s not just my people that are in danger.

To top it off, the need for a mate surges in my blood as the Chaos approaches.

I had it all figured out until I recognized a new and tantalizing scent and the female it belongs to:

A human with a special gift, a sexy smile, and an aura that calls to me in a way I can’t seem to resist. 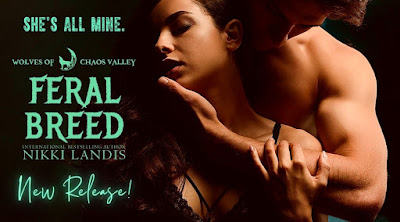