My dad had a saying, “I can show you better than I can tell you,” and it’s perfect for Brianna O’Kennan and Liam Doughty. What begins as a hostage situation becomes a marriage of convenience… and a perfect match-up hotter than a five-alarm fire!

They enhance and support each other’s positive traits and flaws as Bree gets her a dream… a ruling position in the family business. Organized crime. While not a poor man, the marriage nets professional hitman, Liam, more money than he’d ever imagined. The big plus was it wasn’t money directly connected to his own dysfunctional mafia family.

When I learned Bree was only twenty years old, I almost eye-rolled myself into another dimension.  I wasn’t ready for a spoiled mafia princess who whined her way through the story and was TSTL.

But Bree smacked me with a reality check and made a believer and supporter out of me.  Like her family, I was quick to underestimate and judge her.  And I was wrong. Savvy and with the wisdom of someone twice her age, Brianna O’Kennan owns this story

Arguably the best assassin in the business, Liam’s name strikes fear at the mere mention. He’s good at killing, but what sets him apart is he doesn’t torture or kill because of some twisted inner need. Being a hitman allows him to be an independent contractor, free of the family he loathes, and free to decline permanent positions from organizations like the one run by Bree’s father, Vernon.

It’s Vernon’s refusal to pay for a contracted job that leads Liam to kidnap Bree. And it’s Bree’s contempt for her father’s attitude… and the fine print, that takes Liam and Bree from captor and hostage to a black wedding.

I love a story with a couple that doesn’t waste time on pettiness, whining, and battles between the sexes. I love a couple who knows what they want but aren’t afraid to want more.  Black Wedding delivers that couple. Their issues aren’t with each other, but the dangerous world they’re both a part of.

This well-written read isn’t a romantic comedy. It is truly a dark romance with several scenes that could be triggering to some readers. There is deceit, betrayal, blackmail, extortion, more kidnapping, murder, and sexual assault. Someone doesn’t want a female in a position of power and seeks to stop Bree from taking over. But they have no idea how strong and ruthless she is, or to what lengths Liam will go to protect her. I’m looking forward to  seeing how Liam and Bree deal with a few “loose ends” the next book, and of course, Kellan and Mia’s story! 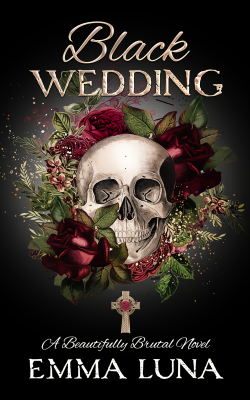 If you thought the red wedding was bad, wait until you see the black wedding!
My name is Liam Doughty and I’m a hit man.
All I wanted was to get what I was owed. I carried out the hit as I was hired to do by Irish Mob boss, Vernon O’Keenan. It’s not my fault they found out too late that they had the wrong man. All I wanted was my money. I thought I could kidnap the Mafia Princess Brianna O’Keenan and get the ransom money. What I got was so much more!
Ruthless, feisty, and incredibly sexy, she’s far from the timid daddy’s girl I was expecting. Bree has her own agenda. She wants to dominate in a world ruled by men. I have no doubt she can do it, but she will need my help. Her family rules state only males can run the business. So, Bree proposes we get married. She gets to rule, and I get more money than I ever dreamed of.
Two dark, evil worlds collide when we agree to our black wedding. We will fight each others enemies and come out on top. But what happens if we develop real feelings and we realise our wedding wasn’t all that black?
Author Warning
Black Wedding is a dark mafia, kidnapping romance. Due to darker themes it is recommended for 18+ readers. This book features dark themes which may be a trigger for some people. If you would like more detail then please email emmalunaauthor@gmail.com.
Please note this book is set in the UK, and Emma is a British author, therefore the book features British spellings and phrases. Please keep this in mind.

“Oh, Princess, not only can I say it, I can do it too. I was just trying to be polite with you, but I won’t hold back if you want the real me. So yes, what I’m asking is if the sack of shits you dated before could give you earth-shattering, toe-curling orgasms, whether they had finished first or not.” His voice has taken on a new gravely tone that sounds almost raspy. As he speaks, he practically growls. The sound of him talking about the mind-blowing orgasms he claims he can give has my ovaries clenching and my pussy starting to feel wet.

“Never…I’ve never had an orgasm given to me by someone else,” I whisper, hoping the ground will swallow me up. Instead, my admission rings through the air as though I shouted it.

“Fuck, you really have dated a lot of twatwaffles. I have no idea what will happen between us or if we will ever progress to a sexual relationship in our marriage, but I can fucking guarantee that you will come every time with me. I would make sure my tongue craves your taste, my fingers desperate to feel your pussy hungrily grip them for more, and my cock owning all your holes. I would make sure I learnt to play your body like a complex instrument, and only I know how to make you sing. You can rule in public, but I am always in charge when it comes to sex, and whether you want to or not, your body would bend to my will. I would own you.” The dirtiness of his words, the hard, sensual look on his face, and the short, sharp breathy moans he releases as he speaks tip me over the edge.

Emma Luna is an author and editor who lives in Cambridgeshire, UK, despite her heart still very much being Northern. She lives surrounded by her crazy family; her Mum, who is her best friend and biggest fan; her Dad who helps her remember to always laugh; her Grandparents and Brother who can never read what she writes and her long suffering man-child Boyfriend who she couldn’t live without (but don’t tell him that!).In her spare time she likes to create new worlds and tell the stories of the characters that are constantly shouting in her head. She also loves falling into the worlds created by other authors and escaping for a while through reading.When she’s not adulting or chasing her writing dream she loves dog-napping her Mums shih-tzu Hector, chilling curled up on the sofa with her Boyfriend binge watching the latest series or movie, drinking too much diet coke (it’s her drug of choice), buying too many novelty notebooks, and completing adult colouring books as a form of relaxation. Oh and she is a massive hardcore Harry Potter geek. Ravenclaw for life!Thank you for taking a chance on a newbie author – hope you enjoy and come back for more!