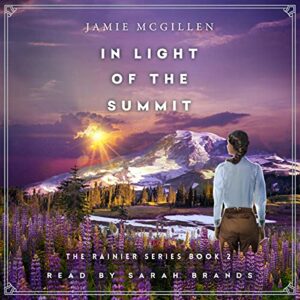 The much-anticipated sequel to In Sight of the Mountain!

After Anna Gallagher’s first climb on Mt. Rainier, she faces a new challenge – enduring the ridicule and threats that come with breaking tradition. In 1890, being a young female mountaineer makes polite society uncomfortable, even angry. But despite the threats and inherent risk, she still has plans for another climb, even if it jeopardizes her family bookstore and puts her in more danger than she ever imagined.

Emily Watson has always been close with the Gallagher family. As a young girl she dreamed of a wealthy husband, a fine house, and a future in Seattle society, and now, she finally has it. Her desires couldn’t be more different than Anna’s, but she’s confronted with her own invisible mountain to climb when she’s suddenly poverty-stricken. She must decide what matters most and whether true love is worth waiting for.

In Light of the Summit is a captivating story of ambition, heartbreak, and redemption. It’s a tale of two childhood friends navigating womanhood in the late 19th century, with as much grace as they can muster, while still figuring out how to be true to themselves.

Jamie McGillen lives in the shadow of Mount Rainier, and no matter how many times she moves away, it draws her home. Everything about large evergreen trees delights her, except how poky they are, and the sap. Her poems and essays have been published in numerous literary journals, and she teaches English Composition at Highline College. When she’s not teaching or cutting strawberries for her starving children, she enjoys writing rhyming poetry, but it’s simply not as popular as it used to be. You can find out more about her at http://www.jamiemcgillen.com.

Sarah has had a long love affair with audiobooks. She first fell in love with Little Dragon and Orange Cheeks by Jay O’Callahan at age 5 and has been listening ever since. Back then, of course, they were books on tape. Her dream of becoming an audiobook narrator started to become a reality when she began volunteering at Learning Ally as a reader. Outside of reading and narrating, she enjoys baking (when there’s not a flour shortage due to a pandemic), hiking, and dabbling in writing and drawing. Sarah finds herself interested in many things, reflected by her work history: waitress, retail associate, licensed forklift driver, salesperson, special education teacher, reading therapist, and professional learning facilitator… Currently she daylights in ed tech sales and moonlights in her recording booth. She lives in Virginia, grew up in Oklahoma, and a piece of her heart will always be in Colorado.

In book 2 of Anna Gallagher’s journey, she’s a little older, a lot wiser, and more determined than ever to summit Mt. Ranier.

Her staunch support network now includes her grandfather, Oscar, who no longer disapproves of Anna shunning the conventional woman’s role to follow her heart and dreams. Her number one supporter, Ben Chambers, is back and will make the trek with Anna… after their wedding.

Not everyone is happy about Anna’s quest, and an evil campaign of terror and intimidation escalates from vandalism to arson and puts Anna’s and Ben’s lives in jeopardy.

Ben’s estranged parents arrive for the wedding, and his rude, grumpy father doesn’t hide his disapproval of Anna’s unladylike behavior. Is it coincidence that some of the intimidation tactics occur when Ben’s father is in town? Could he be that cruel?

Brother, Levi, and besties, Emily, June, and Heather each deal with the challenges of life in the 1890s but never waiver in their support of their sister and friend.

It’s incredible the challenges—and obstacles—dealt with in that era don’t exist today. Women still strive for equal treatment under the law, but the powerless, second-class citizen days are gone. When one character loses the husband she believed to be affluent, his attorney informs her the man was in debt and she is liable for that debt, and, that women “in her position” have found work in brothels. Mercy! Those could be his last words if said to a woman in 2021! HA!

Sarah Brands continues her narration of Anna’s story, and she doesn’t just give characters a voice but also distinct personalities. Not long after the audiobook began I knew which character was speaking without needing them identified. Kudos to her!

I enjoyed Anna’s story… the good and the bad, in which she always found silver linings. I’d like to believe someone like her connecting with other women with the same sense of self and strong determination is was helped propel women forward in the fight for equality.

I volunteered to review this audiobook as part of my participation in a blog tour with Audiobookworm Promotions. The tour is being sponsored by Jamie McGillen. The gifting of this audiobook did not affect my opinion of it.