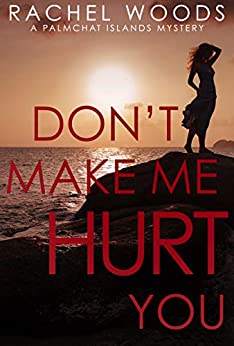 Beneath a starry sky, a man and woman engage in a passionate tryst in the backyard of a home.

Once their intimacy ends, the man remains outside, enjoying the sultry, tropical night air, unaware that he is not alone.

Someone is watching him. Sneaking up behind him. Someone with a knife.

After the man is found the next morning missing his head, married journalists Vivian and Leo Bronson discover that the victim was going to expose a crooked scheme at an island electric company. The victim had plenty of diabolical coworkers, but he also had just as many jealous ex-lovers.

When a shocking confession sends the police on the chase for the suspect, Vivian and Leo follow a lead which takes them to a deadly hideaway where the killer waits, setting a trap they may not be able to escape …

Don’t Make Me Hurt You is Book 4 in the popular Palmchat Island Mystery series but can be read as a standalone.

Note: This book was previously published as “The Shameful Accuser.”