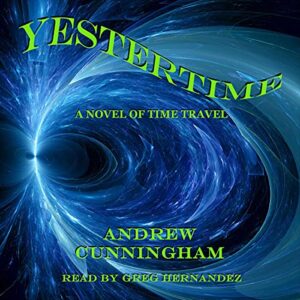 “I’m going to die a hundred years before I was born….”

The handwritten note was in a dusty trunk that sat in a cave untouched for 150 years. What did the words mean? When journalist Ray Burton finds the trunk near the Arizona ghost town of Hollow Rock, his life changes in an instant.

Something in the trunk shouldn’t be there.

This begins a dangerous journey of discovery bordering on the impossible. A discovery that will affect the past, the present, and the future.

I’m the author of novels in several genres, including, mystery, thriller, and post-apocalyptic science fiction. Under the name A.R. Cunningham, I’ve also written the Arthur MacArthur series of mysteries for children.

I was born in England, but have spent most of my life living in the U.S.—including 25 years on Cape Cod before moving to Florida. A former interpreter for the deaf and long-time independent bookseller, I’ve been a full-time freelance writer and copy editor for many years. A 4th-degree Master Black belt in Tang Soo Do, I finally retired from active training when my body said, “Enough already! Why are you doing this to yourself?” I’m married, with two grown children and two awesome grandsons. My wife and I spend as much time traveling as we can, and are especially fond of cruising the Caribbean.

​I have been gratified by the response to my books. When I published Eden Rising back in the spring of 2013, I had no idea what to expect. When I sold my first few copies, I was excited beyond belief that someone was willing to take a chance on it. Numerous books and thousands of copies later, I am still humbled by the emails I get from readers telling me that my books kept them up late into the night.

In October of 2014, Wisdom Spring made me an official Amazon Bestselling author, a thrill I never thought would happen. But it still comes down to being able to bring a few hours of escape to a reader. That’s what it’s all about for me.

I hope you will try my books. Please feel free to email me with your comments.

Narrating audiobooks is highly gratifying. I immerse myself into an author’s story in order to bring it to life for the listener. I’ve enjoyed working with Andrew Cunningham for several years. His books are filled with rich characters, and the stories keep me turning the pages.

I also work as a background actor in movies and TV shows.

For more than 20 years, I worked as a radio news reporter and news writer. I spent half of my broadcasting career at ABC News Radio in the Washington, D.C., bureau. I covered all the federal agencies as well as Congress and the White House. I reported on a wide range of stories during my career, including financial and entertainment industry news.

After saying goodbye to a dying friend, freelance journalist Ray Burton’s trip into the Arizona desert to spread his ashes leaves him stranded in a cave during a sudden storm. Inside the cave, he stumbles across an old trunk filled with items, including a newspaper dated 1870. Ray’s excited about his find until he finds an item in the trunk that’s out of place, obviously not from 1870.

His investigative skills come in handy as Ray tries to make sense of his new finds.

Researching some of the names found in the trunk will lead Ray on a journey that begins with a missing man, includes several run-ins with the NSA, missing celebrities, and the possibility of time travel.

Burton is a great protagonist. Highly respected and much-awarded, the journalist traveled the world for his stories. But while writing a story on the blood diamond trade in Africa, the assignment nearly ended with his death and he walked away from his adventurous career. Now he writes soft stories and fluff pieces. However, the thought that time travel could be real and is being covered up by a shadowy agency in the government spurs Ray on and back into old form.

As Ray gets closer to the truth, he also may be close to something he never thought he’d have… love.

Once again, the winning combination of Andrew Cunningham’s writing with the narration of Greg Hernandez delivers another stellar audiobook.

I volunteered to review this audiobook as part of my participation in a blog tour with Audiobookworm Promotions. The tour is being sponsored by Greg Hernandez. The gifting of this audiobook did not affect my opinion of it.