Series: The Storm Below, Book 4

None return from beneath the Storm!

Ary and Chaylene have fallen beneath the Storm. Plunged into a world of eternal darkness and rain, they have to survive. Hunted by the Stormridres, what hope does Ary have to end the Storm now?

To lead him to the light, Chaylene must pay the ultimate price!

All shall burn in her cleansing fires!

With the fall of Ary and Chaylene, Estan and Esty are lost. How can they stand against the golden darkness descending upon the skies?

Will Estan have the courage to stand against the Dark Goddess?

When evil comes wrapped in good, what chance does the world have?

You have to listen to this epic and powerful fantasy novel to find out!

J.M.D. Reid has been a long-time fan of Fantasy ever since he read The Hobbit way back in the fourth grade. His head has always been filled with fantastical tales, and he is eager to share the worlds dwelling in his dreams with you.

Reid is long-time resident of the Pacific Northwest in and around the City of Tacoma. The rainy, gloomy atmosphere of Western Washington, combined with the natural beauty of the evergreen forests and the looming Mount Rainier, provides the perfect climate to brew creative worlds and exciting stories!

Book 5 of The Storm Below is in production and will be released this summer!

Sign up here to receive an advanced listening copy (ALC)! 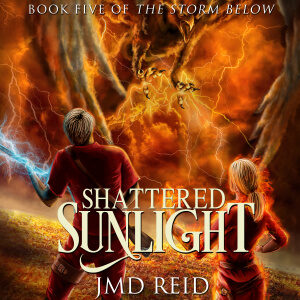 3 thoughts on “#AudioTour “Golden Darkness Descends (The Storm Below, Book 4)” by JMD Reid”