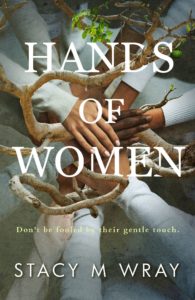 Most women would think Haddie Kellar leads a charmed life.

The educated fifty-year-old spends her days lost among her plants and herbs creating homeopathic remedies to help others. She and her loving husband, Sam, have been together since college, and he fully supports her endeavors, never questioning or second-guessing her.

But Haddie’s life isn’t perfect. She was unable to have children. Sam shared the pain of not having a family and it made them closer. He never resented her or walked away.

However, it was Haddie who walked away… from her university teaching position. She loved sharing her knowledge of biology and botany with her students, but when she was passed over for tenure, she’d had enough. If it weren’t bad enough Haddie was overlooked because she was female, the man who received tenure sabotaged her chances by using her gender against her.

Haddie knows she’s the latest casualty in the war on women. And it seems everywhere she looks, women are treated as second-class citizens, dominated, subjugated, violated, and abused by the patriarchy, misogyny, and arrogance of men.

It shouldn’t be this way, and someone needs to do something.

When Haddie stumbles upon an anonymous way to punish abusers and allow women to reclaim their dignity, she knows that someone will be her.

Her remedy takes off, and Haddie is elated at the justice Hands of Women claims. But what happens when Sam finds out, and an investigation threatens to unmask her and end her project?

Such a thought-provoking read!

I had no sympathy for these fictionalized men. They got what they deserved. But unfortunately, they have too many real-life counterparts who are never held accountable.

From fathers to husbands and bosses, nearly every woman (and girls) can tell of at least one time in their lives when they were victimized in some way by a man. Haddie Kellar carries the frustration and rage of every woman and it spurs her on.

Haddie ultimately wants one thing, across the board equality. She doesn’t understand why women can’t be appreciated and allowed to succeed on their merits and capabilities, instead of being judged for their gender.

None of us understand that, Haddie.

While she appreciates her supportive husband and wishes more men were like him, I felt Haddie also took Sam for granted. Perhaps not in a negligent way, but she knew he’d forgive her anything because of his love for her.

I was also concerned Haddie’s cure could outgrow her and be used for the wrong reasons, but I gave her the benefit of the doubt. She’s a sharp lady.

When her back’s to the wall, Haddie Kellar has a decision to make. Will she continue doing the wrong thing for the right reasons, or will she risk it all to better the lives of marginalized women?

Kudos to Stacy M. Wray for this well-written, timely read on a serious real-world issue and I recommend it to all women… and men.

Haddie Kellar is passionate about three things: her marriage, her doctorate in botany, and women’s rights. It’s the injustices of the latter that sends her conscience plummeting into a dark lens of how to level the playing field, even if it goes against the grain of morality.

After creating a gel that alters the personality, Haddie feels invincible after women from all over take action against men who have wronged them. Her movement is working and everyone is noticing, even though her identity has been kept secret. So, when her loving, supportive husband discovers that she’s behind the shocking events revealed on the news, it rocks her world.

Haddie knows what she’s doing is unlawful, but she refuses to stop, knowing she’s improving women’s lives. But how far will she go? It’s not only her but all the ladies that she’s recruited for her cause.

When her identity is finally discovered, Haddie feels trapped, especially when they come knocking on her door. Will this be the end of her crusade?

Hands of women everywhere have been changing the offensive behaviors of men. So, how can it be so wrong when the outcome is so convincingly right?