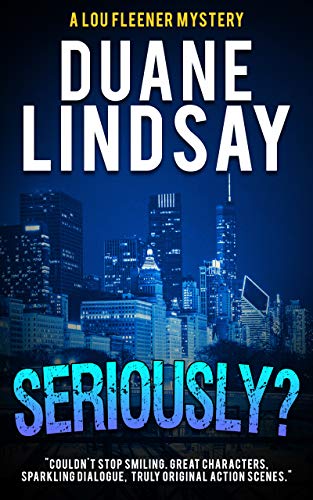 Private Investigator Lou Fleener’s second surprising period thriller explores an explosively dangerous conundrum: how can Lou prevent a huge Nazi terrorist attack when every cop in Chicago thinks we wiped out all the Nazis in the war?

It’s early 1960’s Chicago and Lou’s back in business. After his last harrowing heist adventure, he took some time off…and ended up bored out of his skull. Now he’s scouring the city for clients. His fiery wife Cassidy and his painfully awkward yet brilliant best friend Monk are standing by, ready to serve as the crack team that recently bested the mob. But their first customer has a doozy of a problem. She’s an elderly Holocaust survivor who needs Lou to investigate her new neighbor, a Nazi fugitive from justice she recognizes from the camps. Lou’s client is hellbent on getting the Nazi arrested and tried for his brutal crimes.

Immediately, Lou’s at her service…until she disappears under mysterious circumstances. All signs point towards her being kidnapped and murdered by the Nazi neighbor. When Lou, Cassidy, and Monk manage to get on the Nazi’s tail, they figure out some unfortunate news: there isn’t just one rogue American Nazi plotting misdeeds. There are a lot of Nazis. And they’re planning something big.

Lou Fleener’s action-packed adventures will appeal to every kind of mystery reader–he’s got the edge for hard-boiled fans, and the witty, fun banter and likeable characters required by cozy lovers. Like Donald Westlake, Lindsay’s prose is humorous and humanizing. Fans of James M. Cain, Raymond Chandler, and Lawrence Block will also discover a new favorite sleuth.