Welcome to the release blitz for Skinny Dippin’, a Romantic Drama novella by Didi Oviatt. 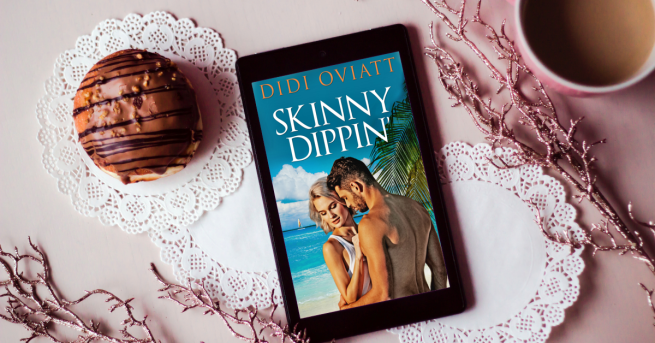 When Carla agrees to house sit a condo by the beach for a summer, she’s met with a juicy surprise. Though reluctant, and determined to stay away, Carla is drawn to a young man a few doors down. Blake is handsome, temperamental, and just as determined to win her over as she is to stay away. Will Carla succumb to his possessive, domineering traits and become his for the summer? Or will she let better judgement along with their age difference drive a wedge between the undeniable connection? Three months under the summer sun is about to heat up the parts of Carla that she once believed to be lost, tossed to the wind and gone forever. After an accidentally naked night in the water, everything changes, and Carla is forced to face his persistence head on.

Slowly, the air releases from my lungs and I stomp my feet to the house. The paperwork for my leave sits perfectly concealed on the front seat of my car. The last thing I want is to have my kids see them right off the bat. I pull a stalk of celery out of the overstuffed paper bag in one hand, so I can point it at my children while I make my way into the kitchen.

“Mom!” Dean throws his hands in the air, palms toward me in surrender. “Before you say anything, just hear us out.”

“You’re a villain,” I say and thrust the celery around like a sword. I wave it back and forth between them. “Both of you.”

“Disarm yourself, Woman.” Marsha chimes in. “We only did what we had to. You never would’ve taken the initiative at work if we didn’t step in. There’s only so long you can use your job as an excuse.”

She rounds the bar to take the awkwardly full paper bag from my arm and sets it next to the stove before the bottom has a chance to give way and spill its grocery guts all over the tiled floor. She’s completely unfazed by my foodish threats and doesn’t even glance in the celery’s direction.

Dean’s face lights up at my lighthearted humor. With wide eyes he laughs openly, then he shakes his head and returns his attention back to the schoolwork in front of him. Finals are rapidly approaching, so they’ve both been glued to their studies. It’s been peaceful this last week, but a little lonely I’ll admit. Another reason I’m afraid to be by myself for the summer. I’m a great mom, and for the most part my kids prefer to spend the majority of their time with me, so I’m rarely lonely.

I don’t want to be alone for months on end. My mind wanders to the billboard, and I remind myself of the water dripping down the muscular back. Okay, alone is one thing. Alone on the beach might not be so bad, with the possibility of a view like that close by.

Didi Oviatt is an intuitive soul. She’s a wife and mother first, with one son and one daughter. Her thirst to write was developed at an early age, and she never looked back. After digging down deep and getting in touch with her literary self, she’s writing mystery/thrillers like Search for Maylee, Justice for Belle, Aggravated Momentum, and Sketch, along with multiple short story collections. She’s collaborated with Kim Knight in an ongoing interactive short story anthology, The Suspenseful Collection. Most recently, she published her first romance novella titled Skinny Dippin’ which was originally released as a part of the highly appraised Anthology, Sinners and Saints. When Didi doesn’t have her nose buried in a book, she can be found enjoying a laid-back outdoorsy lifestyle. Time spent sleeping under the stars, hiking, fishing, and ATVing the back roads of beautiful mountain trails, and sun-bathing in the desert heat play an important part of her day to day lifestyle.

Where to find Didi:

Since Maylee was abducted from her high school the very month of graduation, her aunt Autumn has never lost hope in finding her.

It’s been three years. Autumn has finally reached inside herself and found the courage to track down an old lead. She travels across the country to find more clues about Maylee’s disappearance.

But will she be able to pry Maylee’s case back open, and what will she uncover in the process of searching for Maylee?

It’s a cold, dark world we live in, and Autumn is about to find out just how cruel it can be. But strength and determination are on her side, and she will do whatever it takes to deliver justice.

After sisters Markie and Kam get tangled with the wrong people at the wrong time, long-buried family secrets begin to emerge.

A serial killer is targeting people close to them. As danger inches closer and closer to home, twisted desires become a reality. The deeper they dig, the darker the secrets they find.

But who is the cold, calculated murderer, and can they find a way to survive?

★★★★★ – “There is an authenticity to Ms. Oviatt’s writing that is refreshing to experience in a thriller-type novel.”

★★★★★ – “A murder mystery with plenty of drama, suspense and danger. Fans of mystery and thriller genres will love this book.”

★★★★★ – “Fast-paced and full of twists I never saw coming. I was hooked immediately.”

Ahnia has a very dicey past – one that is scratching under the surface, just dying to get out.

She’s hit rock bottom, broke and desperate to be on top again. When she finds herself partnering up with a man she hardly knows, and who’s utterly untouchable, she’s forced out of her comfort zone in every way.

Will Ahnia and Mac’s dangerous decision be a success, or will she find herself in the clutches of an unforgiving force, brought about by her childhood sin?

In this nail-biting thrill ride, no one is as they seem…and no one is truly safe with those they trust.

When local girl Misty is found dead in an underground bunker, the town is thrown into a whirlwind of panic and speculation. Times are tough, but the spaced-out farmer community pulls together as one, trying to uncover who’s guilty.

Thrown smack in the middle of the chaos is a group of teens: local troublemakers, but with good hearts. Although they’re innocent, the local law enforcers believe otherwise, and the true killer is lurking far too close for comfort.

Will the four be able to uncover the truth before one of them pays the price for Misty’s death?

For Mature Readers Only:
A suspenseful novel with a twist. Eight short stories, by two suspense authors, from diverse backgrounds. From opposite sides of the Atlantic these stories have been created. One author started the tale and the other ended it. No discussion, no pre-planning, but yet their stories are seamless. With just creativity and the use of writing prompts, to craft one tale, with two different writers. This anthology of suspenseful, fast paced and engaging tales covers multiple genres. From heart felt romance, crime, fantasy, and steamy historical fiction. There is a story for everyone!
Blurred Lines (The Suspenseful Collection Vol. 2):

For Mature Readers Only:
As the second installment of suspenseful short stories by two suspense authors, from diverse backgrounds, Blurred Lines offers a thrill ride with nine stories in genres across the board. From opposite sides of the Atlantic these stories have been created. One author started the tale and the other ended it. No discussion, no pre-planning, but yet their stories are seamless. With the use of writing prompts Kim and Didi have created tales that will tug at your heart strings, drop your jaws, and leave you clinging to the edge of your seat. From gory horror, romance, crime fiction, family drama, and fantasy, there is a story for everyone!
New Age Lamians: http://mybook.to/newagelamians

Jackson has barely reached manhood when lightning heralds the end of the world as we know it. The lightning has awakened the Lamians: descendants of the mythological creature Lamia.

In his world, The Company delivers supplies into his village, and harnesses technology that others lack. Soon, Jackson is taken by The Company; he is to be an ultimate warrior, alongside few others, as their blood is rare and compatible with the technology needed to transform them.

According to The Company, the Lamians are monsters who need to be defeated at all costs. But is Jackson really the one who can save the world?