Whenever I read a book, there is a quote, theme, catch-phrase, or emotion that defines the story for me and stays with me long after the ending. In the case of Mint, it’s one word… toxic.

Small towns are famous for their gossips and troublemakers, but the author has populated this small English seaside town with so many horrid characters, I wondered why anyone would want to live there.

While his life was defined and directed by toxicity, James Philip Andrew “Mint” Minter is a likable and sympathetic character. I also liked his mother, Abigail Hudson, who adored her son almost as much as the father he shared a name and birth-date with. However, Mint’s father died before his birth, and it’s Abi’s desire to move on and the bad choices she makes, that change the direction of Mint’s life.

After spending nine years in prison, Mint returns to the town he hates not to the loving arms of his mom, but to view her body in a morgue, her death ruled a suicide. But he knew Abi better than anyone and knows she would never take her life. Mint’s determined to find the truth about Abi’s death even if it means facing down George, his abusive bully of a stepfather, and Micky, the woman he once loved whose betrayal sent him to prison. He also needs to find Lara, his sixteen-year-old half-sister who’s been missing since their mother’s body was found.

The story is told in two main timelines: the history and events leading up to Mint’s incarceration and his release nearly a decade later. There are also several points of view throughout the story and I found them neither excessive nor confusing. Each voice pulled me deeper into the story and also proved there’s at least one whack-job serial killer loose in town.

Deftly written, Mint is both poignant and heartbreaking, and caustic and brutal. The unique ending is twisty and satisfying, but it’s events two-thirds into the story that ripped my heart out. I didn’t see it coming and I wasn’t ready. However, in a weird way, it made me smile and give a silent nod to the author. I was set up! HA!

This is my first read by S.R. Wilsher but it won’t be the last.

It’s the summer of 1976, and after nine years in prison, James Minter is home to bury his mother.

A history of depression and a series of personal issues has seen her death ruled as suicide.

His refusal to accept that conclusion means he must confront his violent stepfather, deal with the gangster who wants his mother’s shop and, of course, face the family of the boy he killed.

But will his search for the truth in the claustrophobic atmosphere of a small seaside town, and the unpicking of the peculiar relationship his mother had with the Stonemason next door, put his own life in danger. 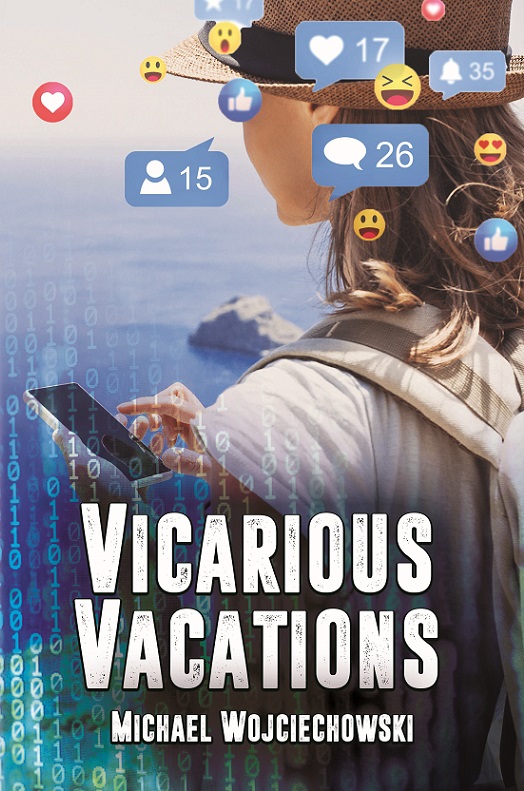 Like so many millennials, Paige Reynolds yearns for social media stardom. Vicarious Vacations, an organization that manufactures fake vacations to increase one’s social media influence, promises users their services can guarantee ascension to social media royalty. True to their word, Vicarious Vacations elevates Paige’s online presence, but now that she’s amassed a respectable following, what will she pay to regain her privacy? Michael Wojciechowski is a native Utahan. He is of average height, weight, and intelligence. By all accounts, he is extra-ordinary. Vicarious Vacations is his fifth novel and probably his best.

We’re thrilled to share the cover of upcoming novel, Ouijinaut by Phil Motel! Read on for more details!

The bleak loneliness of a seaside town in winter.

A bereaved man with many secrets tries to escape the ghosts of his past.

His passionate relationship with Rachel comes with its own complications; the scars from losing her father at a young age remain.

Trying to escape from a past that haunts him, he meets Hanna, a Hungarian mystic. The meeting will change his life…

Ouijanaut is a psychologically dark love story with themes of life, death and the afterlife, and may be unlike anything you’ve read before.

Phil Motel was born in North London, England but has now been a resident of the US for a decade. Having spent time in Colorado and New Jersey, he currently lives just outside of Philadelphia, PA.

Ouijanaut is his second novel. His first, Rum Hijack, was published last year.

Title: The Death of Me

Add it to your Goodreads:

All I ever wanted was to get out of Brooklyn and make something of myself. I had no intentions of being another statistic after losing my best friend the way I did as a teenager.

With no parents around to help in guiding me to make my way in the world, I had to do it myself. Only now I have my degree.

I’m an English teacher at Odyssey High, but am I willing to risk everything I’ve worked so hard for for the one girl I shouldn’t want, yet can’t keep away from!?

Could Meghan Harrison, my student, just be the death of me and my career?

At seventeen, being ripped from your hometown to halfway across the country before your senior year of high school is enough to make any teenager hate the world. Imagine my surprise when it happens to me and I find myself in New York and a new school.

While exploring my new city, I discover more than just new sights, unexpectedly, it brings Rebel Mcguire into my life. There’s just one problem, he happens to be my new English teacher.

Do we do the right thing and stay away from each other or do we give in to our desires and cause the ultimate carnage along the way? Either way, we may just be the death of each other.

It’s the summer of 1976, and after nine years in prison, James Minter is home to bury his mother.

A history of depression and a series of personal issues has seen her death ruled as suicide.

His refusal to accept that conclusion means he must confront his violent stepfather, deal with the gangster who wants his mother’s shop and, of course, face the family of the boy he killed.

But will his search for the truth in the claustrophobic atmosphere of a small seaside town, and the unpicking of the peculiar relationship his mother had with the Stonemason next door, put his own life in danger.

I tend to divide my life in two. Prior to 2009, I did the long hours and the commitment to paying the mortgage, studying, and finishing the house, whilst trying to write in a way that didn’t impact too much on family and career. The reality was work affected my writing, and my writing prevented me ever committing to my job wholeheartedly.

In 2009, I had a kidney transplant. It took a while to undo the way I had lived before, my life still involved work, children, coffee, and chocolate. But slowly I’ve stepped back from work and now spend much more of my time pleasing myself; writing, making furniture and creating art. I’m no better off financially, but I have been much more productive with my writing.

There was a time when I was rewriting the same book over and over in some attempt to second guess the rejections I received. Self-publishing has freed me to move on. Now I usually have two books on the go, one in development and one on its way to completion. 2020, however, being the year that it was, means I’ve been working on three.