Fast-paced Romantic Suspense with twists and turns that will keep you on the edge of your seat!

“This has easily cruised into my top ten romances … in the history of EVER.” –Heroes and Heartbreakers.

“I wish I had more stars to give. This whole series is fantastic.” ★★★★★ from Deborah B. Johnson

“Such an incredible story! I didn’t want to put it down.” ★★★★★ from Cari Absalon-Bogner

“With its fast-paced story, thrilling romance and compelling plot, this is a book you will not be able to put down! Keep the lights on, door locked and trust no one while you read it.” ★★★★★ from Kimberly Perry 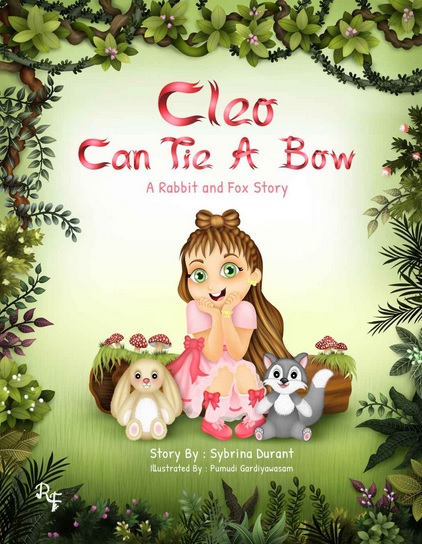 A Rabbit And Fox Story

Cleo loves bows. She wears her hair in a bow and decorates her room with bows. Cleo is bow crazy.

Learning to tie a bow is very difficult for some people but Cleo remembers how to do it from a cute story she once heard. It is about a little rabbit with very long ears and a very helpful fox who shows her what to do to keep them clean.

This is the story of how Cleo learns to tie a “bunny ear” bow. You can follow along with the rabbit and the fox to learn to tie a sash or even shoe laces.

Exercises in manual dexterity build self-esteem in children. Knowing how to tie shoe-strings, scarves and more into a bow is a useful and rewarding skill.

“Teach a child a useful skill. Build confidence and self-esteem that lasts a lifetime.” 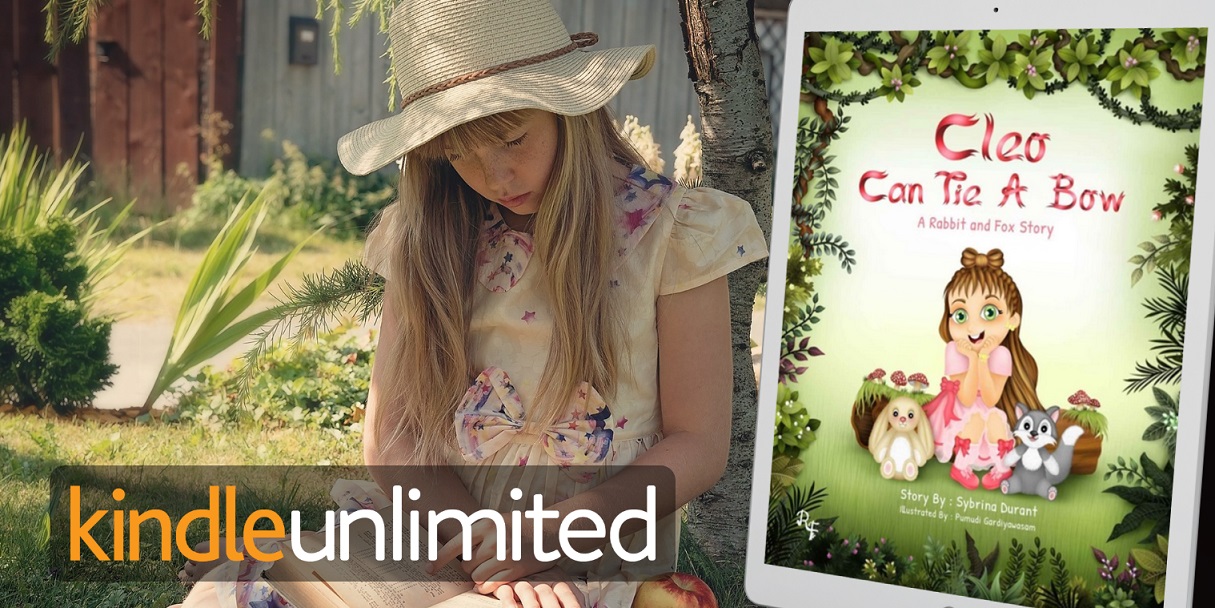 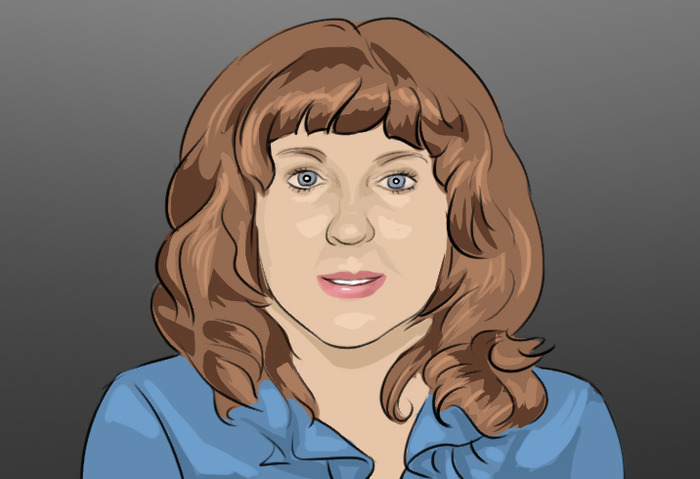 Sybrina Durant writes both factual and fanciful books. She is the author of the “Learn To Tie With The Rabbit and The Fox” series of books. When Beth gets dumped by text, she’s more irritated about being left without a ride than losing her boyfriend of six years. Not feeling the heartbreak you are suppose to feel after a breakup tells her all she needs to know about that relationship.

When her best friend and roommate, Charlie, returns from Paris after filming his debut movie—having also been screwed over—it’s time to get the drinks out.

One drunken night, and a scorching kiss later, the Celibet is made.

Can they stay single for twelve weeks?

Will their attraction to each other break their pact, or can they resist temptation?

When fate intervenes and friendship turns into more, who will win the bet? Sienna Grant is a British writer from the West Midlands in the UK, who decided to step into the world of writing and has since never looked back.

She started her journey with contemporary romance as she loves a happy ever after but has since sampled different genres and has pushed every boundary, she has set herself. From contemporary romance to suspense, teen and young adult but also stepping into the darker world of Mafia and women’s fiction.

When she’s not writing, she’s a wife and mother to three children.two of which are now grown up and starting their own lives.

Sienna loves to read most romance when she can, but always with a hint of realism.

Stacy McWilliams is a Scottish Author who loves romance. All of her books have a romantic element and her books will keep you on the edge of your seat, make you want to throw your kindle around and her characters will make you either love them or loathe them.

If she’s not writing, looking after her three boys or spending time with her hubs, she’s reading or watching TV shows such as Lucifer, The 100 and Supernatural. She’s working on new materials and is hoping to release three-four books in 2020. Also check out her Facebook page for updates on any signings she’s attending

CAN CHOICE EXIST WITHIN THE CONSTRAINTS OF A PROPHECY?

After witnessing a horrific event, Dani develops mental health issues, but is able to overcome her inner turmoil through treatment and her parents’ love. Their lives fall into a comfortable routine filled with dance classes, sleepovers, and video game marathons.

At the age of thirteen, Dani is involved in a tragic highway disaster, and as a result of her injuries, her powers manifest. Afraid to tell her parents about her newfound abilities, and even more afraid of harming them, Dani is lured away to find her estranged mutant brothers, seeking answers about her origins and how to control her new power.

Guided by an amulet and map—a gift sent from her brother, Tomas Scholz—Dani embarks on an adventure where she meets a young boy, Jonathan. He is lost, with no memories of his identity, his family, or his home. With nowhere else to turn, Jonathan joins Dani on her quest, and together they battle pirates, the undead, and finally, her evil family—a family that is a far cry from what she expected.

Will Dani deny her destiny and resist the evil plans of her siblings, or will she succumb to her role in fulfilling the prophecy—being the path and the key—that ends in the fall of mankind?

Agent Markus Drake assisted Dani and Jonathan to their portside seats inside the pilothouse. The driver then tossed them a couple of life jackets, before taking his seat at the helm.

The boat edged away from the dock, the engine on low. Rob waited tall and stoic on the dock until they pulled fully away. Dani watched him through the window, shrinking down until he was a tiny doll‑sized man and then tiny zombie dolls came running at him, charging onto the dock. The shots from Rob’s gun echoed across the water. The tiny zombie dolls flew backward one after the other. And then she couldn’t see the island anymore. Water surrounded them.

Turning back to face the front of the boat, she yelled over the sound of the motor at Agent Drake, “How long until we reach the mainland?” She assumed the patrol boat would cover the distance much faster than the barge had travelled.

“A few hours. There are some apples and sandwiches in the cooler.” He pointed under their seat. “Help yourselves.”

Dani wasn’t all that hungry, not after the carnage they had just witnessed. But, surprisingly, Jonathan grabbed himself a sandwich and devoured it in four bites.

Dani couldn’t help being pissed off. All the effort of getting her and Jonathan this far…wasted. Now they were retracing their steps, returning home. And then what? Her parents would be fuming, probably never trust her again. She would be punished, grounded forever, no longer able to venture anywhere on her own. And they would continue to keep the truth from her, who her biological father and brothers were, and where her brothers now lived…why she wasn’t allowed to see them. Now she would never meet her brothers or learn to control her power.

She couldn’t help wishing there was still a way for her to get there…to Mount Hekla…which wasn’t too far away from them but was quickly receding into the distance with each passing minute. This boat, although quite large, sped through the water with astonishing velocity. The time to turn around was slim, and the handsome driver with shoulder‑length brown hair, wearing Ray Bans and a military-style jacket, was uncommunicative. He was doing his job, escorting the kids back where he was ordered to and that was that. Convincing him to change course would be impossible.

If only Dani could get control of the boat. Then she could turn it around and steer in the opposite direction, where she thought Mount Hekla was located. Of course, that was crazy thinking. She couldn’t drive a boat, and she had no way to know for certain how to reach the active volcano. Resigned, she settled back into her chair, the oversized fluorescent orange lifejacket she wore rubbing uncomfortably against her chin.

A bang on the stern side hull of the boat caused the deck to vibrate beneath their feet, gaining Dani’s attention. The driver seemed not to notice; his attention focused forward on steering the large watercraft through the choppy waves. A can of oil rolled across the deck of the boat into Dani’s view through the pilothouse window.

Where did that come from?

Then a loud moan came from directly outside the aft door.

“Jonathan, did you hear that?” she asked the blond boy who was crunching hungrily on a red apple.

Mouth full, he mumbled, “Whot?” Then another moan. This one he heard. Eyes wide, he turned to Dani, choked down his apple and mouthed, “Zombie?”

About the Author
Lanie Mores has her Honours Bachelor of Science Degree and a Master of Arts in Clinical Psychology and is a certified hypnotherapist and personal trainer. She lives in Ontario with her husband, son, and forever barking fur babies, Batman and Petri. Sea of Forgetfulness follows Father of Contention and the award‑winning Guardian of Angel in a four‑part series.

SOME AMISH COMMUNITIES AREN’T SO COZY.

Sheriff Serenity Adams journeys to a northern Indiana Amish settlement to search for a missing girl, and discovers a young outsider has also vanished into thin air. Serenity suspects the cases are connected, and joins forces with an unlikely ally to find answers. When she goes undercover, the sinister truth of the girls’ whereabouts begins to unravel, and she finds herself in a race against time to save the girls, and a desperate fight for her own survival.