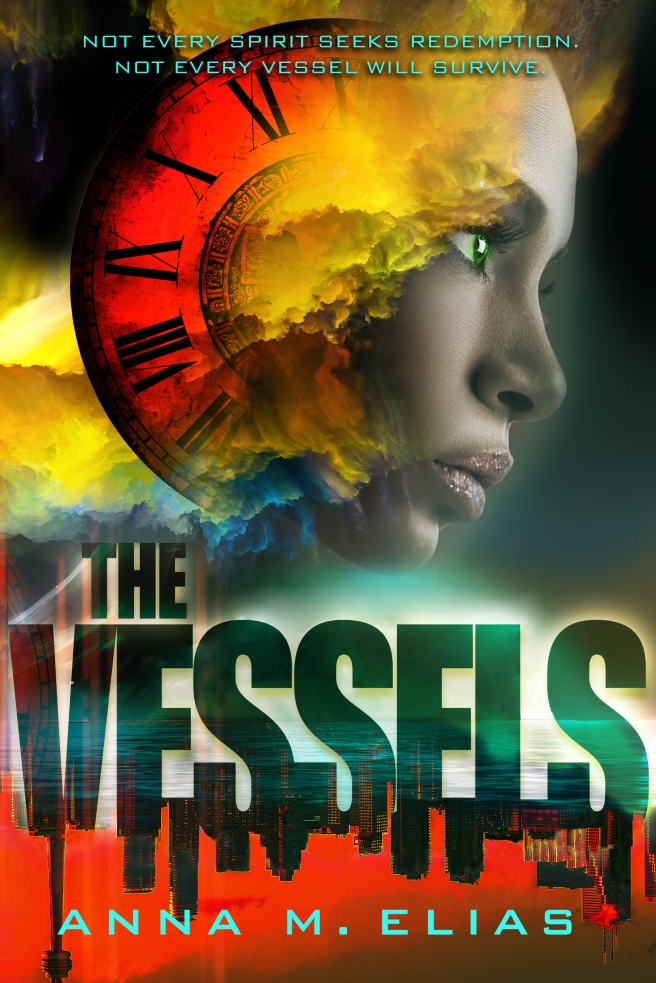 What if you could help those who’ve passed on get a second chance—but at the risk of your own life?

Four broken strangers volunteer to become the first humans in North America to join the international VESSELS program. Their bodies will host the Spirits who seek to right past wrongs and earn a chance at Elysium. Disguised inside a homeless shelter in Reno, the program is facilitated by a retired Army officer, a former ER Doctor, and a tech-savvy teen who tracks the Spirits merged with their Vessels through an ancient ritual on the Anaho Indian Reservation. The Vessels only have seven days to succeed—and to survive. But when the vengeful spirit of a serial killer enters one of them, they learn not all Spirits are here for redemption.

Though the wide mirror made the tiny room feel big, it had the opposite effect on Tal. She splashed water on her face. Her reflection seemed to shrink in the big glass, making her feel like a single speck of humanity on a vast planet in an endless universe. A lone Vessel housing the infinity of Spirit. She splashed more water and blinked. A more present and focused woman blinked back—one who wasn’t much different than the woman who had been uprooted from her old life in Pittsburgh. But she had accepted an insane job as a ghost host and had been branded with her very first tattoo. Her badge and gun were gone, and the concept of “protect and serve” now meant something else entirely. Tal grabbed one of the soft white towels and dried her face. The cloth smelled fresh and clean, like air-dried linen—it was homey, comforting She caught her own gaze in the mirror one more time. That frightened, hopeless woman from the pawnshop window two weeks ago was gone. A more confident person replaced her—equally uncertain but willing and ready to face a new and unpredictable future. Perhaps her change was more like the grown-up happy child after all, and less like the dried up pool full of leaves and dirt. A sudden pain stabbed her left ankle, and the skin around her new tattoo seemed to—move. Tal sat on the bed, yanked up her pant leg and crossed her left foot over her right knee. While most of the iridescent vines shimmered normally, a small cluster at the center of her inside leg were twisting together into a small circular mark at her ankle. They pulled in the hidden SObY letters, elongating and absorbing them to form a kind of Celtic or Romanesque knot made of iridescent vines. Her flesh burned slightly as the center of the twisting knot opened and a tiny image took shape. The figure was more primitive and cryptic, like a totem carving or cave painting, but it definitely had wings. One last vine connected and the twisting stopped. So did the pain. Tal inhaled sharply. She held her breath, steeled her nerve, and touched the mark. Though the texture looked different, and though the mark was round against the straight, interconnected tendrils of the tattoo that circled her leg, the skin felt the same on both. Tal exhaled and closed her eyes, unable to discern where one ended and the other began. When she opened her eyes again, she caught the symbol’s shrouded image for a fleeting moment before it finished. What she’d thought was a primitive knot or ancient medallion of vines turned out to be—a nest. At its center, the angel figure had become an enigmatic, nearly invisible dove clutching a vine in its beak like an olive branch. The mark twisted closed, hiding the nest and bird inside. Goosebumps tore up and down Tal’s skin. She shifted to the nearby desk and fired up her computer. Her trembling fingers flew over the keyboard as she researched images of doves, dove symbolism, the “Serve Others” expression, and any other ideas the tattoo inspired. Her search turned up a host of disparate sites—from the dove above Jesus at his baptism, to white birds being released at weddings and funerals, to recipes on preparing tasty squab. Nothing reflected this tattoo or its particular elements. “This is crazy,” she mumbled, working her shoulders to unstick the tension. “That many Vessels in the world, spanning decades, and not a single image or hit?” *** Excerpt from The Vessels by Anna M. Elias. Copyright 2020 by Anna M. Elias. Reproduced with permission from Vesuvian Books. All rights reserved.

Anna Elias is a screenwriter who began her career as Don Johnson’s assistant on Miami Vice. She’s worked on feature films such as Nell, The Rainmaker, The Client, 12 Monkeys, A Time to Kill, and Practical Magic. She has written and co-written spec films, TV scripts, and award-winning shorts. Anna’s passion for justice translates to her work. This was especially true on the set of John Grisham’s A Time to Kill. Canton, Mississippi had just suffered great racial hardship and division in a Mayoral race. With Anna’s encouragement, the movie crew made extra efforts to befriend, buy from, and work with the townspeople, and it served to break down walls of inequality and injustice that had divided the town for decades. The impact was so positive that Dan Rather traveled there to tape a 2-part special for 48 Hours.

This is a rafflecopter giveaway hosted by Partners in Crime Virtual Book Tours for Anna M. Elias and Vesuvian Books. There will be 2 winners. One winner will receive an Amazon.com Gift Card and One winner will win THE VESSELS by Anna M. Elias (print). The giveaway begins on July 1, 2020 and runs through September 2, 2020. Open to U.S. addresses only. Void where prohibited.

2 thoughts on “#BookTour “The Vessels” by Anna M. Elias”