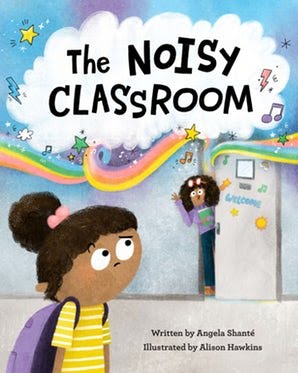 A young girl is about to enter the third grade, but this year she’s put into Ms. Johnson’s noisy class. Everything about the noisy class is odd. While all the other classes are quiet, Ms. Johnson sings and the kids chatter all day. The door is always closed yet sounds from it can be heard in the hallway. With summer coming to an end and school starting, the girl realizes that soon she’ll be going to the noisy class. What will school be like now?

Featuring the honest and delightful humor of debut author Angela Shanté and the bold, graphic imagery of debut illustrator Alison Hawkins, The Noisy Classroom encourages those with first-day jitters to reevaluate a scary situation by looking at it from a different angle and to embrace how fun school can be, even in nontraditional ways. 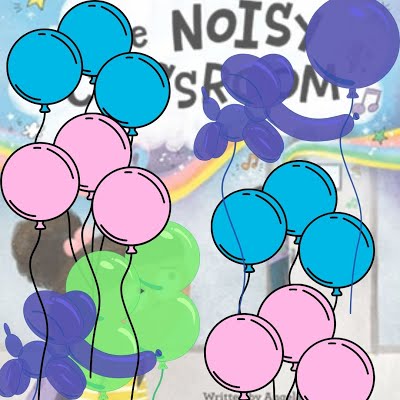 Angela Shanté is writer, poet, editor, and educator, with a Masters in Elementary Education and an MFA in Creative Writing. She has taught elementary school for ten years. In her own classroom, she believes in having fun, playing games, moving around, dancing, and enjoying the education experience, even if it occasionally gets loud. Angela lives Los Angeles, California.

Special Agent Luna Roosberg lives and breathes her job. Who needs a personal life when work is so rewarding?
When a new case sends her to investigate a local motorcycle club, covering as the president’s new flavor of the week, the lines between professional and personal quickly start to blur.
Although the Arrow’s Edge MC stays mostly on the right side of the law since Ouray took the gavel, the appearance of the feds at their gate can still rattle his cage.
When a string of robberies points squarely in Ouray’s direction, he’s forced to cooperate and put the blonde, prim and proper half-pint on the back of his bike.
With pressure mounting both in—and outside—the club, Ouray no longer knows who he can trust, except the woman who is shaking up his life—and stirring his blood.

Driven to make her books about ‘real’ people; she creates characters who are perhaps less than perfect, each struggling to find their own slice of happy, but just as deserving of romance, thrills and chills in their lives.

Recipient of the ReadFREE.ly 2019 Best Book We’ve Read All Year Award for “Covering Ollie, the 2015 RomCon “Reader’s Choice” Award for Best First Book, “Slim To None”, and Finalist for the 2017 Kindle Book Award with “From Dust”, Freya continues to add to her rapidly growing collection of published novels as she spins story after story with an endless supply of bruised and dented characters, vying for attention!

It’s New Year’s Eve and Natalie has a rare night off from her shifts at the hospital. Determined to have fun with friends, she stops at a local store for provisions.
There, amongst the craft beer and pork rinds, she comes face to face with her high school boyfriend, Brennan McLean. He’s a rockstar. She’s a nurse. To say life led them in different directions would be putting it mildly. Still, time hasn’t lessened the electric chemistry between them. By the end of the night more was dropping than just the ball.
Convincing herself she could have fun without getting attached, Natalie treats herself to a weekend tangled in the sheets with him. But that lie she told herself pops faster than champagne bubbles.
With media rumors swirling around Brennan, can the pair find a way to make their unlikely relationship work? Or will Natalie’s resolution not to get her heart broken meet a painful end?

Pre-Order the Rest of the Series Today!!

Synopsis
Cause and consequence:
Two words that haunt me.
When I was stolen, I learned to hate.
When he saved me, I learned to fear.
I ran from him, following a trail of the dead, from Miami all the way to Colombia.
Now I’ve fallen into darkness again, and he’s the only one I see.

But he’s a shadow man.
A bad man.
A soldier.
A killer.

The red right hand to the devil himself.

We’re a dirty contradiction: I’m the girl who can’t be touched, whom he refuses to set free.
We’re a dangerous obsession: There’s damage running deep in both of our souls.
Caught up in a cartel war I want no part of.
Trapped between love and hate.
One night will change everything…

For years, Joseph Grayson killed in the name of Dante Santiago.
Now, he kills for me.

Catherine Wiltcher is a former TV producer and a self-confessed alpha addict. Her writing is best described as sinfully sexy, and her characters always fall hard and deep for one another.

She lives in the UK with her husband and two young daughters. If she were stranded on a desert island, she’d like a large pink gin to keep her company. Cillian Murphy wouldn’t be a bad shout, either…