Before being selected by Lightning Books to be part of their ebook series,

Landsliding was self-published by me. During that process I learned the importance of having confidence in my novel – and if I hadn’t, I’d have given up a long time ago!

Initially, I followed the well-trodden path of sending the early chapters to literary agents in the hope that they’d be interested in the rest of the book. Each time I’d wait in agonised impatience for a positive response, but none came. Every agent gave me good feedback – they liked my writing, they thought the content would appeal to a wide audience – but nobody picked it up as a novel.

One time I was especially hopeful when I sent the first chapters of Landsliding along with a covering letter to an agent I’d seen speaking at a literary festival. She emailed back within 24 hours and my heart nearly leapt out of my mouth when I saw her name in my inbox; I was convinced she was writing to say she wanted to publish the novel.

Unfortunately, I was wrong. She certainly liked it – her message was full of compliments about my writing style – but said that the book wasn’t quite what her agency was looking for at that time. My disappointment was intense but I was determined to keep going.

I’d already had to learn resilience when a fellow member of my writing group voiced her opinion about the first chapter of Landsliding. Within the group we would review each other’s work on a regular basis and gave our views in a frank yet careful way. Nearly everyone was polite and would veil any criticism with a balancing amount of compliments – but not this person.

She told me the first chapter was ‘boring’ and the characters didn’t interest her. I bit back my instinctive reply – which was to tell her she was wrong – and managed to keep smiling despite a temptation to burst into tears. Luckily nobody else in the group agreed with her and I soon realised that the occasional negative response is part of being an author. Not everyone can like your work.

So when the publishing world didn’t show immediate interest in Landsliding I had to stick to the courage of my convictions: that it was a strong, interesting story that would appeal to a wide audience. That’s when I decided to self-publish – and when the five star reviews started coming in, I was thoroughly relieved.

At times, though, my resilience was tested to the limit. One such occasion was a book fair attended by some of the dreariest people I’ve ever had the misfortune to meet. I sat stoically at my stall, trying to look unconcerned as the attendees drifted past, showing no interest in my book (or anybody else’s) and even less interest in me.

On the rare occasion that somebody stopped at the stall, it was to request the name of a good local restaurant or to confirm the quickest way to M&S. Do you realise you’re at a book fair?, I wanted to ask. One woman – who did ask what my novel was about – yawned ostentatiously as I was telling her, then walked off without saying any more. I wanted to cry.

Fortunately my belief in the book paid off. When Lightning Books said they wanted to publish Landsliding as part of their first e-series, I was so happy. The stress of awaiting a positive response from an agent; the indignity of being told my story was boring; the tolerance I had to show at that book fair – it was all worth it.

Now I’m writing my second novel and no doubt the process will start all over again. This time, though, I know what to expect!

When Julia’s husband leaves her, and their small son Matty, to live with another woman, her friends, especially Caroline and Vick, rally round to help. But when Julia starts a new relationship, after a chance meeting, her friends are not quite as supportive.

Julia sees Brendan, the quietly spoken IT guy who comes round to fix her computer, as a loving and protective man and, as time passes, a potential father figure for Matty. Caroline and Vick, on the other hand, see him as jealous, controlling and potentially dangerous. He appears to be a man with a secret past.

What her friends don’t know is that Julia has secrets of her own which, if they get out, will almost certainly shatter her fragile domestic bliss.

Landsliding is a compelling drama that turns your expectations on their head with a subtle twist that will leave you wondering where your sympathies lie.

​Originally from Manchester, Mandy Jameson spent ten years living in southwest France where Landsliding, her first novel, was written with the encouragement of a prolific writing group.

Now settled in Sussex with her daughter, her passions include football, chocolate and walking on the Downs.

She is working on her second novel. 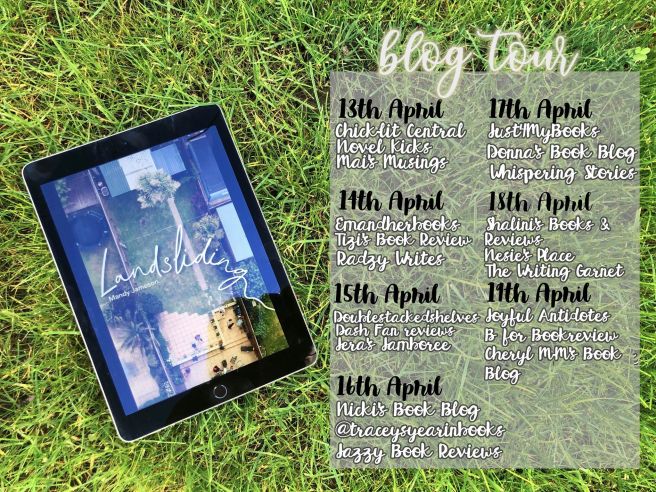