Darcy thought his problems were over when Pemberley hatched and successfully imprinted on humans. But baby dragons prove far more difficult than any dragon lore prepared him for. Only Elizabeth Bennet’s notes offer him any help. When his imperious Aunt Catherine takes matters into her own hands, things take a turn for the worse and Pemberley’s life hangs in the balance. He desperately needs more of Elizabeth’s help, but she ignores all of his requests.

Elizabeth, though, has problems of her own. After the Bennet family dragon sent Pemberley away, life at Longbourn was supposed to return to normal and Elizabeth get on with the all-important business of marrying the heir to her father’s estate. Except that he is the last man in the world whom she could ever be prevailed on to marry – a bumbling, addle-pated dragon-hater who demands she gives up the dragons she lives for.

Can she, with the help of her dragon friends, find her way back to Pemberley before they both suffer their fate from the Dragon Entail?

Five time BRAG Medallion Honoree and #1 best selling Historical Fantasy author, Maria Grace has her PhD in Educational Psychology and is a 16-year veteran of the university classroom where she taught courses in human growth and development, learning, test development and counseling. None of which have anything to do with her undergraduate studies in economics/sociology/managerial studies/behavior sciences. She pretends to be a mild-mannered writer/cat-lady, but most of her vacations require helmets and waivers or historical costumes, usually not at the same time.

Benjamin Fife has always had a passion for learning. With a mind that remembers all sorts of numbers and useless trivia, he regularly wins local radio shows and enjoys confusing people with sci-fi quotes.

Fife grew up in Southeast Idaho. He attended college at Idaho State University, where he met his future wife in their music theory class. They have been married nearly 20 years and now have six children and a whole menagerie of animals. When their oldest daughter was three or four years old they started reading aloud from novels every night at bedtime, and have continued the tradition ever since. The family loves exploring various worlds and topics through Fife’s wonderful reading skills, which get better every year. They all have his Christmas Carol voices memorized (and the older kids are known to quote along with portions), since he has read it to them every December.

Benjamin enjoys all kinds of sci-fi and fantasy – both books and shows, is an extreme eclectic music lover, and prefers his chocolate to be of the 90% cocoa variety. Above all, he loves to be with his family. He loves recording audio books, and is delighted to tell people, “I’ve finally found what I want to be when I grow up!”

Custom Statue of the Dragon ‘Pemberly’

For long-time Durango Fire Department EMT, Ava ‘Blue’ Navarro, her teammates at Station 3 represent a family more loyal than her own.
However, when patients start dying on her watch, she draws the attention of local law enforcement. In particular the smooth-talking detective she’s successfully evaded for years, fearing he might stir up her quiet existence.
Detective Tony Ramirez considers himself a likable guy, which is why the perpetual cold shoulder from the athletic blonde first responder is confusing.
Now he finds himself in charge of a murder investigation that threatens to shake his world both personally and professionally. A situation that won’t earn him any brownie points.
When medical examiner, Calder Stonewall, is called in to assist, it only seems to throw more suspicion Blue’s way, and Tony has to pull out all the stops to prove her innocence while securing her heart.

“I really hate this,” she says when I lift my head.
“I must be losing my touch, then,” I joke, and she slaps my chest.
“Not that, you idiot. I hate being weak.”
“Now who’s being an idiot?” I lightly shake her. “If you sprained your ankle, would you think it weak to see a doctor? Do you think the people you tend to on a daily basis are weak?” When she reluctantly shakes her head, I push my point home. “So how’s this any different? We’re just talking about another part of you that needs some healing. Shit, if you think that makes you weak, you’re calling every cop in Durango a pussy. Wait ‘til I tell the guys.”
“You wouldn’t,” she snaps, her eyes spitting fire.
“If you keep spouting that nonsense, I might.”

Award-winning author Freya Barker loves writing about ordinary people with extraordinary stories.
Driven to make her books about ‘real’ people; she creates characters who are perhaps less than perfect, each struggling to find their own slice of happy, but just as deserving of romance, thrills and chills in their lives.
Recipient of the ReadFREE.ly 2019 Best Book We’ve Read All Year Award for “Covering Ollie, the 2015 RomCon “Reader’s Choice” Award for Best First Book, “Slim To None”, and Finalist for the 2017 Kindle Book Award with “From Dust”, Freya continues to add to her rapidly growing collection of published novels as she spins story after story with an endless supply of bruised and dented characters, vying for attention!

I don’t care how much billionaire Roman Cadwell pushes (and, oh boy, does the sexy man push ALL my buttons), I am not dating him. Especially not when he’s wearing a golden band around his ring finger. I do not get involved with married men. Call it my line in the sand. If a man can’t be faithful, I want not one single thing to do with him.

But what if Roman isn’t really married? What then? No, no, no. I will not fall into Lying McLiarson’s trap.

Only every time the man touches me, my body forgets I’m a good girl and wants to give in. Hands off, Mr. Lying Pants, before I forget I’m a good girl.

Although – no one said I had to be a good girl forever.

Author’s Note: This romantic comedy contains absolutely, positively NO cheating. None. But it does have a whole bunch of witty dialogue and a super sweet happily ever after. And maybe more drama than the author originally intended. What can she say? The characters have minds of their own.
Hands Off is book 3 of the Love in the Suburbs series but can be read as a standalone.

“A Truth About…” is a composition of 52 poems for nurturing your ever -growing soul. Exploring topic from mind, body and intuition to love, parenting and life goals, the book embraces the broad and wondrous spectrum of the human experience. Covering 52 keys areas of our life, this book provides one insight per week. A year of inspiring poetry.

It is when you emerge from your cocoon,
when you go against the wind,
when you step out into the rain,
that you morph beyond trepidation.
You have tough wings
that can stretch out for you even larger boundaries
and hence, are able to take you as high as you aspire.
So dare to venture into the new
as you are yet to become
what you ought to be,
a better, stronger and more magnificent version of yourself. 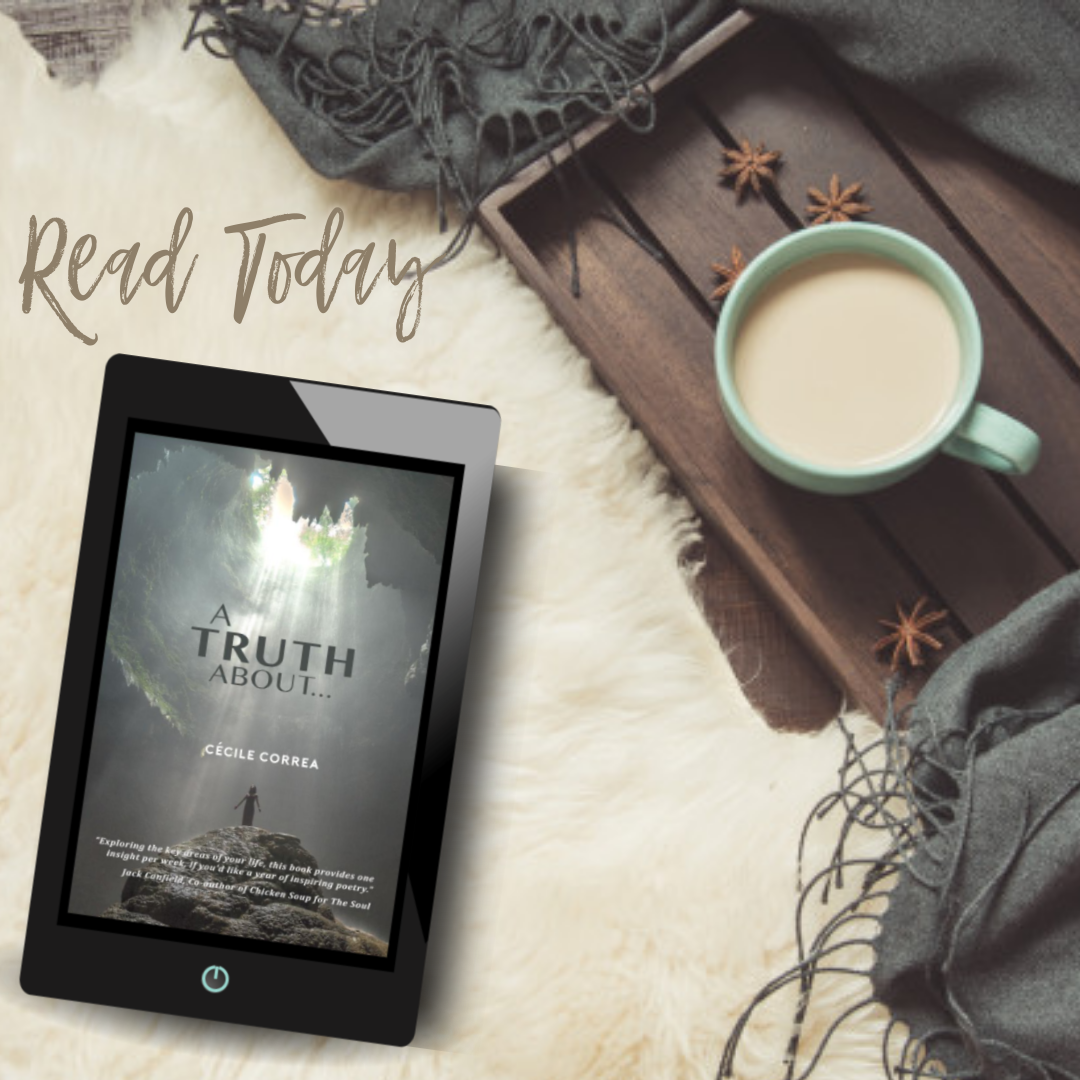