Although her origins are in Nocedo del Valle, an agricultural village in Orense, a province of Galicia, Spain, Blanca De La Rosa was born in the Dominican Republic in the bosom of a humble family. But fate had something else in store for her.
Pursuing a Better Tomorrow is not just a novel that portrays the history of three generations, but rather an inspiring cross-generational journey from Spain to the United States. The novel details a historical overview and the ideologies of each era where the characters portray the strength of character required to achieve a better tomorrow given the twists, turns, and synchronistic events that shaped their lives.
De La Rosa candidly shares her coming-of-age story of self-discovery as she transitioned from New York City’s projects to corporate America, detailing her personal and professional journey.
This great novel will inspire you to believe in your abilities, dare to dream, and reach for your goals as you pursue a better tomorrow.
Are you ready to embark on this journey?

Blanca De La Rosa was born in the Dominican Republic. She grew up in the Projects of the upper west side of Manhattan in New York, during the time before the Hispanic population developed the supportive Latino community which exists today. Although she struggled without support in her cultural and linguistic transition, De La Rosa was able to graduate from Pace University with a Bachelor’s Degree in International Business Management and to establish a successful 34-year career rising through the ranks of Mobil/ExxonMobil Oil Corporation.

During her career, she held numerous positions both domestic and international in nature with increasing responsibility. These assignments took her around the United States, Europe, Central / South America, and Nigeria.
De La Rosa retired from ExxonMobil after 34 years of service. As a Business Development Manager and President of the company’s Employee Resource Group she often represented her company as lead presenter at the Regional and National Scholarship Awards hosted by the Hispanic Heritage Foundation. In addition, she represented her company as host, keynote speaker, and panelist of various events with organizations supported by the company’s charity foundation. After all her time in the industry, she says her most rewarding role was serving as mentor to the young employees in her company – guiding them through the corporate maze.
De La Rosa has authored two books: Empower Yourself for an Amazing Career in which she shares career advice drawing heavily from her own successes offering a fresh approach and insight on climbing the corporate ladder, combining practical, common-sense advice with inner wisdom and spirituality, providing strategies to increase the chances of success in the workplace; and Pursuing a Better Tomorrow – En busca de un mañana mejor, spanning more than one hundred years, it is not just a memoir that portrays the history of three generations, but rather an inspiring cross-generational journey from Spain to the US.
Contact Links
Website
Twitter
Facebook
LinkedIn
Promo Link

Luz, a Peruvian girl, is enjoying her life in Lima with her father. But what she does not know is that something is about to go very, very wrong, because she lives in a future that has been strangely altered by the magic of an overzealous alchemist from the past. Soon her world will collide with other times and places, putting Luz in terrible danger and linking her fate to a motley assortment of characters.
Will they find their way through unimaginable danger, together? Or will the challenges of this strange new world prevail and take them out, one by one?

The tip of the alchemist’s nose hovered perilously close to the surface of the bubbling, frothing liquid that filled the large black cauldron hanging on the hook over the fire in the enormous hearth. His apprentice flinched, fearing that the boiling fluid might bubble up and burn his master’s nose, or that such close proximity to the terrible stench that suffused the steam coming off of it might make him faint.
Neither of these things would be good for the apprentice because the alchemist was known for his extreme fits of melancholy. Any setback could send the master into a depression that could last for weeks, and to have something go wrong at this late stage, with this particular experiment…
The apprentice shuddered to think of the depression such a thing would cause the alchemist, which would then mean weeks, perhaps months of inactivity, delaying his own promotion to journeyman and thus, eventually, to master alchemist in his own right.
Today, however, was different, because the alchemist was close to success. His mood was almost ebullient as he inhaled deeply of the noxious stuff, closing his eyes as though savoring the terrible stench.
“Ah, that’s it,” sighed the alchemist. He looked up from the cauldron. “Or, nearly so. A bit more hellebore, I think, and a pinch of nightshade.” He held out his hand impatiently. “Hurry, Marcello, hurry,” he said as the apprentice scurried to fetch the necessary items. “Timing is everything with such things.”
Marcello gathered the hellebore and the nightshade and placed the requisite amounts in his master’s outstretched hand. The master immediately tossed the stuff into the cauldron and pushed his nose close to sniff the concoction once more.
“This is it, it is perfect!” he exclaimed. He turned bright eyes to his apprentice. “Do you realize, Marcello, what this means for us? In just a few moments, we can be anywhere in the world. Anywhere at all! The very stuff of time and place will be ours for the manipulating!” 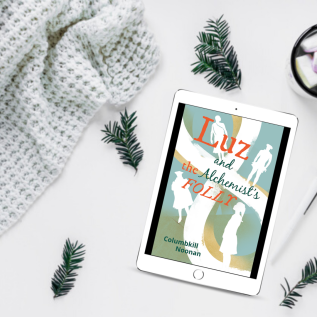 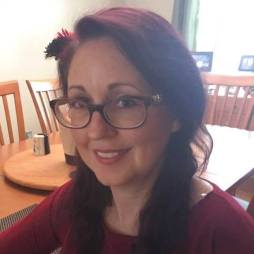 Columbkill Noonan is the author of the best-selling Barnabas Tew series of mythological mysteries, as well as a number of fantastical short stories. When she’s not writing, she’s busy teaching aerial yoga or having adventures with her elderly rescue horse, Mittens.

When Adrian Carter followed his wife, Agnes, to their dream home in North Berwick he had no idea it was to be the start of a truly terrifying journey.

Every old house has its folklore and stories so he was told. He hadn’t expected those stories to be true. As a horror writer, Adrian had a terrific imagination, but even he could not envisage what was to come.

Tracie Podger, a multi-genre author, wrote this ghostly tale initially as part of an anthology. But she just couldn’t keep it short enough so released The Last Witch as a novella.

Witches and ghosts, dunking stools, and old houses combine in this entertaining tale of the goings-on at North Berwick House.

“I think it’s safe to say your client is certifiably mad,” Doctor Matthews said as he and Jacob stared through a glass window into a bare room.

Jacob Wellbeing had been set the task to defend Adrian Carter who was presently rocking in a corner of a padded cell whilst waiting for a verdict in a murder charge to be delivered. Jacob believed he had successfully claimed insanity and after all the evidence had been presented, it would be a surprise if the jury decided otherwise. The guy was clearly nuts. Jacob and Doctor Matthews could hear the mumbles and the reciting of what Adrian had done. There was no doubt he had murdered but his account of it was baffling.

Come on over to Tracie’s reader’s group to keep up to date on news: