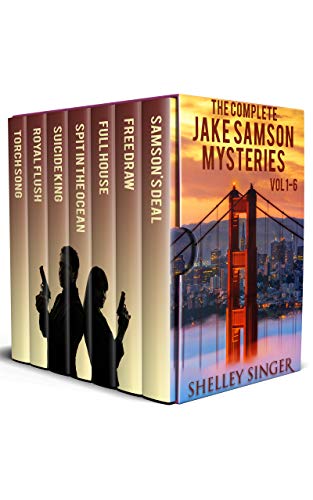 All six wonderfully wry and witty Bay Area adventures of Jake Samson and Rosie Vicente in one handy box set—PLUS A BONUS BOOK!

His lesbian BFF, Rosie the carpenter, and her justice-dispensing two-by-four are the perfect complements to his relaxed casual style – no room for macho posturing with this crew! Readers will love their easy, breezy relationship, and wish they had a friend like either one of them.

When an acquaintance is the primary suspect in his wife’s murder, Jake and Rosie go inside a radical right wing activist group to which the wife is connected. An assortment of Berkeley kooks and interesting plot twists keep things hopping till the very end.

Jake’s buddy and quasi-boss calls in a favor when his nephew is accused of murder. It’s up to Jake and Rosie to find the real killer, and they’ve got a number of suspects: the victim’s fellow executives at a questionable correspondence school, his divided and bitter family, and his quirky Marin County neighbors–a truly odd assortment of California woods dwellers.

An ark in the middle of suburban Oakland is interesting but not strange by California standards. Even one built by peaceful cultists preparing for the coming flood. Until sometime private eye Jake Samson is hired to find Noah, their leader, who has disappeared with a lovely devotee and a quarter million in cash. The cult suspects foul play, but the police aren’t convinced.

SPIT IN THE OCEAN

The North Coast Sperm Bank in tiny Wheeler, California has been knocked over, and the perp’s tossed its assets in the ocean, leaving a religious-nut note of explanation. Just a prank, says Wheeler law enforcement. But the bank hires Jake Samson and his ever-sharp Watson, Rosie Vicente to find out who made the unauthorized withdrawal. As a storm brutalizes Wheeler, a bank employee slips in the mud and falls to her death.

Jake’s never been a big fan of politics, but Rosie invites him to a posh California fundraiser for an energetic gubernatorial candidate of the liberal underdog Vivo party, and Jake can’t resist. It’s all fun and political games until the candidate’s aide finds her boss in her backyard, hanging naked from an acacia tree. The police rule the death a suicide, but Jake and the aide suspect foul play, and she hires Jake to find the culprit. He finds campaign shenanigans, affairs, a possible German mafia connection, and more danger than our hero could possibly have imagined.

A single father gets his Christmas wish. Spend the holidays with the Men of Endurance.

Xenobia Yardell can smile through hurt, pain, and disappointment. In fact, the schoolteacher has been wearing a cheery facade since arriving in the small town of Endurance. That is, until Luke Cole kisses her. His touch pushes all the right buttons, and Xenobia’s spitting mad over the undeniable attraction.

Luke Cole doesn’t suffer fools or indecisive women. X wants him-end of story. He has no idea why she’s angry about their one kiss, but he has no intention of enduring another Christmas alone. 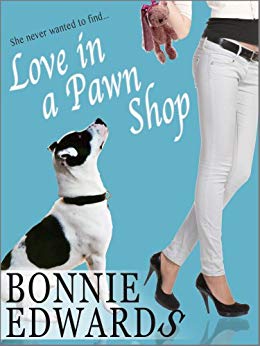 A pit bull, a pawn shop and a pain-in-the-butt kid brother. . .
Dix is good with two out of three. She’s had it with dusty shelves, desperate people and her teenage brother. With Riley about to graduate, Dix is ready to buy her one-way ticket to Paris.

Then sexy cop Dane Caldwell walks into her store on the hunt for stolen goods, and threatens her brother and her business.

The worst threat is to Dix’s heart…if she loses that, she loses her dream.

Dane soon realizes he’s found love in a pawn shop. Even the pit bull thinks he’s okay. Now all he has to do is convince Dix that love is more than just another complication.

Currently FREE at time of posting!

LUCAS
I’m a mess. Broken. Lost my mate and almost myself. In no shape to help anyone.
Then the sexy girl serving me drinks stumbles into trouble with a bunch of wolves who are bad business—I should know. They’re the competition. And they’re as dirty at dot-com investing as they are predatory on young things like her. So I save her. Because I may be broken, but I’m not an ass.Only she shows up the next day at my office. As my intern.

And now the Red pack is after her, putting us square in a pack war—one she doesn’t even understand. I’m in no shape to claim a mate—not happening—but if I don’t, the Red’s jackass of an alpha will.

MIA
I’m just trying to earn my degree and dig my way out of poverty.
I was born a shifter—more of my bad luck—but I’ve kept that a secret, so it doesn’t ruin my life. Shifters are monsters. Criminals. And I’m trying to make something of myself. This internship at the hottest internet business development firm in Seattle is my ticket out… only the boss is a wolf. And insanely hot. And he saved my life.

I’d break all the rules for this guy—except he wants nothing to do with me.

The wolves who do are the Big Bad Wolf kind. The kind I’ve always heard about.

I’ve got nowhere to turn… but to the one guy who doesn’t want me at all. 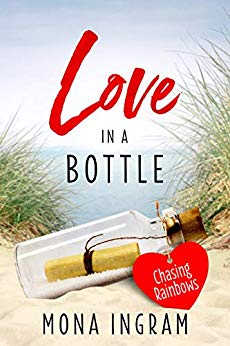 Taylor Lockwood learns the hard way that her beauty does not guarantee happiness. Betrayed in the worst possible way, her career crumbles overnight. Taylor hides away on her father’s small ranch where she struggles to trust again, but a message in a bottle gives her second thoughts. Is the man who wrote the note too good to be true… and more importantly, does she have the courage to find out?

About this series:
Would you share your heartbreak, your hopes, your dreams by writing them down and sending them off in a bottle? Or if you found such a bottle, how would you react? This series takes us inside the lives of people who, in most cases, have suffered loss and are ready for a second chance. A light, slightly edgy look at life and love in today’s world of social media. The first of these stories is Chasing Rainbows.

One PI will take on the system to get justice.

For someone who never got along well with the cops, C.T. Ferguson finds himself in a good place.

His relationship with the Baltimore police is as solid as it’s been. He and his detective cousin Rich are almost friends.

Then the news comes in: Officer down.

The police quickly arrest a suspect. C.T. wants nothing to do with the case.

You can’t always get what you want.

When a vicious assault threatens his life, C.T. must figure out who really killed the murdered officer. It may cost him his life, not to mention his improved relationship with Rich, to find out.

Already Guilty is the fourth novel in the riveting C.T. Ferguson mystery series. You’ll love this book because it shows even a wisecracking PI can have conviction, and its price can be high.