~~~
This is How We Roll: Social Work in Sports

This is how we roll: A coach’s guide to transforming conflict into high performance is a fun, easy to use guide rooted in social work theories of team development and conflict resolution designed to help coaches, parents, athletes and associations anticipate and transform conflict into team cohesion. Here is a taste of the journey that brought me to this place from the book’s introduction:

Five years ago, I was out for a walk and bumped into my friend Dave, who was the president of a local hockey association at the time. Easygoing and positive, with a quick smile and a certain joie de vivre, Dave is well known and well liked. He did an enormous amount of volunteer work—he was a real upstanding member of the community. I knew him as the father of one of my daughter’s classmates, as well as through hockey, as my other daughter had been playing on a team in the association of which he was president. The day I bumped into him, he looked like he had the weight of the world on his shoulders. He could barely muster a smile.

When he looked at me, I saw a light bulb go off for him. Looking back, I think he must have remembered in that moment that I was a social worker. He knew that I had recently started training on managing conflict through communication and mediation. When I asked how hockey was going, he said he had had a really tough season full of all kinds of problems with a few of the teams in the association. Issues with one team in particular had been taking up a lot of his time, and he was having trouble getting on top of the problems. “There are lots of dynamics,” he explained. Some parents believed some players were bullying the others, and many felt the parent coaches were not doing enough to address the problem. The coaches saw the problem differently. As president, he had tried his best to sort through what was happening by sending emails, holding team and parent meetings, meeting with the individuals involved and meeting with the board. He had collaborated with the vice president to strategize. He was finally at a loss.

I asked him when this conflict had begun, and he said it was about two months prior. I asked him how many hours he figured he had spent attempting to mitigate it. After a long pause, he answered: “Including the other board members assisting in finding a resolution…one hundred.” One hundred hours. And he wanted to hire me to help out. My friend and the other board members of the association whom I got to know through working together were not incapable people. Dave was the vice president of a large company and managed 75 employees. He likely dealt with conflict every day. The other board members held similar workplace roles, as did the coaches.

I was not surprised by Dave’s situation. I was glad I ran into him when I did because I knew I could help. As a social worker, I have seen that short-term interventions from qualified helpers who offer fresh perspectives can be incredibly effective. I have also seen what is at stake if conflict is not managed well in a sports team or organization. Sport can do so much for young people, for adults and for communities, but conflict in sport brings with it a high level of emotion. There are weekly local stories about games where escalating problematic behavior on the sidelines has had parents fighting and coaches behaving in crazy, abusive ways, leaving governing boards at a loss. Dave’s scenario represented a president, coaches and players on the brink of leaving their sport because of unmanaged conflict.

What does social work have to do with sports? Everything. Think of it this way: What do you do at the end of a season and the start of another? As a coach, you probably reflect on what the heck just happened and look ahead to consider improvements for next year. When you do this, you are unknowingly turning to your inner social worker…really, you are! Take a look at this definition:

Social work is concerned with helping individuals and groups enhance their individual and collective well-being. It helps people develop their skills and their abilities to use their own resources and those of their broader community to resolve problems.1

Does this sound like the work you do as a coach? It does to me. I have seen coaches like you use the social work skills described above, every day. As a coach, refining these skills will make your life easier and improve your team’s performance.

By thinking like a social worker, your concern will turn to team interpersonal development which, when strengthened, will improve performance. If this sounds like a bunch of fancy words that do not make sense yet, don’t worry. We are going to get into detail in the book. For now, all you need to know is that many make the mistake of focusing their coaching style primarily on skill development and strategy—both of which are important, but they are not enough on their own. For your team to do well, consistently, you need to know how to efficiently fix personal clashes when they come up. 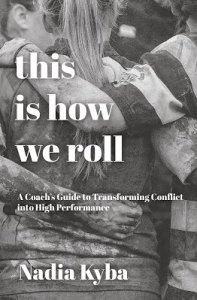 Non-Fiction / Sports
Date Published: November 12, 2019
In This Is How We Roll athlete, trainer and social worker Nadia Kyba brings you easy-to-understand social work concepts and tools that you can apply to transform your team to growth and performance. Full of stories and examples, this is your guide to the often difficult conversations required for true, lasting conflict resolution.
This Is How We Roll is a light, fun journey through the process of creating a unique team brand that will set your team apart in every practice, game and tournament. Both on and off the court, ice or field, witness your team transform through the conflict resolution method of champions.
~~~
About the Author

Nadia Kyba is a lifelong athlete with a deep love of sport. She believes a single positive experience in organized sport can be life changing for the young, the old and the in-between. Working in the field of alternate dispute resolution in the child welfare system for 22 years, Nadia has developed tried-and-tested techniques and unique methods of conflict management that can be effectively applied in coach-athlete-parent-trainer dynamics in all individual and team sports.

Nadia currently applies her skill as a trainer at the Justice Institute of British Columbia and other agencies where she trains social workers, and in sports leagues where she helps teams take advantage of differences rather than falling into the many traps of divisive behavior.
Nadia’s company, Now What Facilitation, assists athletic organizations in simplifying their work by developing their capacity to manage and resolve conflict. She focuses on essential policies, protocols, training and techniques for effective decision-making. Her clients have included provincial sport administrators and coaches, as well as athletic teams ranging from the high school to the collegiate level.
Nadia has also learned much from her husband, Jim, and daughters, Lucy and Abby, all of whom are multisport athletes and coaches. They have provided invaluable and up-close insight into the foundation of her approach to conflict resolution in sport.
Contact Links
Website
Facebook
Twitter
Blog
Linkedin
Instagram
Purchase Link
Amazon
~~~ 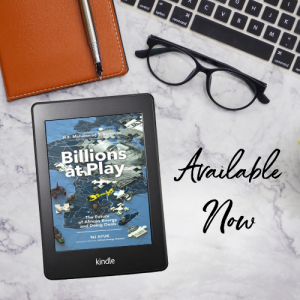 Energy can and must work better for Africans. Billions at Play, the follow up to NJ Ayuk’s Big Barrels, tells us how.
As OPEC Secretary General Mohammad Barkindo says in his foreword, Ayuk is a dreamer. But he is a dreamer with an action plan and through this book, he gives Africans the tools to get more from the energy industry.
How did Africa get here and what comes next? How do African countries and societies get the most value from their resources? What exactly can African leaders do to put their countries on a sustainable, profitable path? And how can all parties win in Africa’s energy deals of the coming decades?
Ayuk expertly argues the case for greater female empowerment, better governance and more responsive national oil companies. He points the way to a more powerful African presence on the world stage through African OPEC membership and through energy value chain development, and examines America’s role in Africa.
A career dedicated to advocacy and deal-making in African energy make NJ Ayuk the most qualified individual to show how energy can indeed work harder and act as the engine for African growth.
Building on the success of his first book Big Barrels: African Oil & Gas and the Quest for Prosperity, NJ Ayuk in Billions at Play: The Future of African Oil and Doing Deals gives us his unique take on what leaders and in-vestors can do to sign deals and build success in this complex business. Big Barrels gave us the African success stories. Billions at Play explains how energy can help achieve the African Dream.
~~~

A leading authority in the African energy sector and a strong advocate for African entrepreneurship and the indigenous energy sector, NJ Ayuk is recognized as one of the foremost figures in African business today. A well-known dealmaker in the petroleum and power sectors and founder of a leading energy-focused law firm, NJ is dedicating his career to helping African entrepreneurs find success and to building the careers of emerging African talent.

As Executive Chairman of the African Energy Chamber and CEO of Centurion Law Group, NJ strives through his work to ensure that business, and especially oil and gas, impacts African societies in a positive way and drives local content development.
He is the author of Big Barrels: African Oil & Gas and the Quest for Prosperity and Billions at Play: The Future of African Energy and Doing Deals.
NJ graduated from the University of Maryland College Park and earned a Juris Doctor from William Mitchell College of Law and an MBA from the New York Institute of Technology.
Contact Links
Website
Facebook
Twitter
Blog
Purchase Links
Amazon
Barnes and Noble
Kobo