The world’s end was his beginning.

Whole chunks of earth are withering away from the mainland and falling into the sea. Natural disasters are claiming thousands of lives. Prayers are no longer answered by gods. Prayers are answered by machines and the Time Fathers of Panagea.

Nicholai Addihein, one of the eight ruling Time Fathers, struggles to save the lives of his people. After a single moment of misunderstood treason, he must also save his own.

While running from the wrath of Panagea’s other Time Fathers, Nicholai lands in peculiar company. Can a fabled immortal, a crew of societal rejects, and a silver-haired woman with a mysterious past breathe life back into a world on the brink of death?

With all of existence at stake, Nicholai and the others prepare to fight until their last breath to change the fate of Panagea. Who would ever guess that success might be just as fatal as failure?

Like many authors, McKenzie took to writing early. She crafted numerous tales throughout childhood that served as an escape from the solitude often accompanying the inability to ‘fit in’ with the normal crowd.

The award-winning author now resides with her family in Green Bay, Wisconsin, where she draws inspiration for her fantasy novels through copious amounts of craft beer and cheese.

Gerard got his start at an early age, performing with various Opera companies and teams throughout Australia. After moving to America as an adult he made the transition into musical theater, and voice-over. Gerard has worked with various Opera and Musical theater companies throughout southern California and LA. Gerard has been working as a narrator now for the last couple of years, and was incredibly honored and excited, when McKenzie Austin approached him to work on this great series.

Music is incredibly inspiring. I’ve listened to my fair share of tunes while writing The Tree That Grew Through Iron (actually, the whole of The Panagea Tales series, really) and there are certainly a few that stand out as having been played on ‘repeat’ during several scenes.

The Tree That Grew Through Iron Giveaway: 3-month Audible subscription

All the Ups and Downs

➜Sign up as a host here

It’s 1932. Prohibition rages, the Depression ravages, and Billy McGlory comes of age whether he wants to or not. Musical and adventurous, Billy dreams of having his own ritzy supper club and big band. On the eve of his marriage to the pregnant Prudence, the shifty “businessman” Rosario Ingovito offers him all that and more. Fame, fortune, and his own Broadway musical – it’s all his for the taking, despite Pru’s opposition to Rosie’s ventures.

Meanwhile, Pru’s artistic career gains momentum and their child is born. Can anything go wrong for Billy? Only when he gets in way over his head does he stop to wonder how his business partner really makes his millions, but by then it’s far too late….

Diana Rubino writes about folks through history who shook things up. Her passion for history and travel has taken her to every locale of her books, set in Medieval and Renaissance England, Egypt, the Mediterranean, colonial Virginia, New England, and New York. Her urban fantasy romance, FAKIN’ IT, won a Top Pick award from Romantic Times. She is a member of Romance Writers of America, the Richard III Society, and the Aaron Burr Association. When not writing, she owns CostPro, Inc., an engineering business, with her husband Chris. In her spare time, Diana bicycles, golfs, does yoga, plays her piano, devours books, and lives the dream on her beloved Cape Cod.

Nina Price is a Renaissance woman: a conservatory trained musician, a Silicon Valley businesswoman, a radio personality, a licensed acupuncturist and master herbalist, and a voice actor/storyteller. She especially loves books with an element of history in them: historical novels, memoirs, biographies, although she’s narrated books in many genres. Born and raised in New York, the characters and places in the New York Saga are very familiar to her, and dear to her heart. She loves to travel the world and listen to the way people speak English. 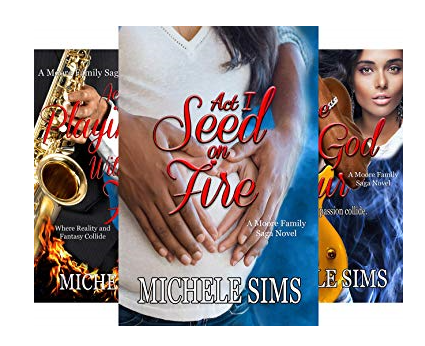 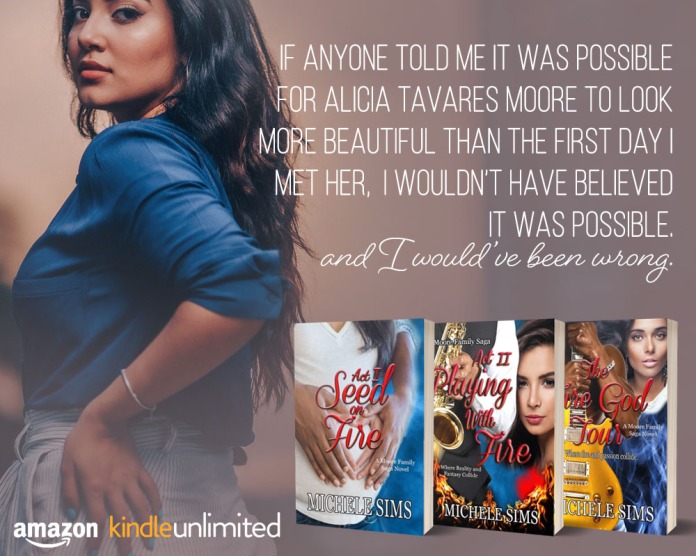 ACT I SEED ON FIRE

Twenty five years before the events in the novel, The Fire God Tour, Kaiden and Alicia Moore, originally from North Carolina, were enjoying a life full of love and passion.  As a young, beautiful and an upwardly mobile professional couple who had made their home in New York City, they were busy balancing their careers with the demands of their new marriage which as fate would have it, included an unexpected bundle of joy. They got pregnant on their honeymoon and so began their adventure in this novel, The Seed on Fire, a sexy contemporary romance of a multi-cultural couple with elements of fantasy that is also the prequel to the novel The Fire God Tour.

Nothing about their lives together has ever been typical and their relationship will forever be changed by a series of nightmarish events that threaten their love and the life of their unborn child. Will their commitment to each other and support of their close knit family be enough to cope with their challenges? Come and join them on their journey as they experience the joys and excitement awaiting the birth of their son, Miles Aridio Moore, a process, to their surprise, also fosters a period of significant self-growth.

This is the second installation of Cade and Lecia Moore’s romantic suspense story. Cade’s music career is taking off. While finishing a schedule of gigs in Paris, he gets a call from his brother Vincent back in the states, who has been watching over Cade’s son, Miles, and his wife, Lecia. Vincent has some surprising news. Miles, now seven, is showing extraordinary abilities that allow him to produce fire. As a member of the Network, a secret society with nearly bottomless resources, Vincent has been able to determine that Miles’s abilities aren’t unique but an extremely rare genetic mutation.

Cade returns to the states to be with his family, but it’s clear that life cannot go on as normal when Miles suffers from an intense illness that leaves him immobile and mute for days. Through Vincent’s Network contacts, Cade and Lecia are able to find adequate care for Miles at a facility that understands his condition.

Aside from his unusual ability, Miles shows an affinity for several other skills, from writing as a result of his extensive vocabulary, to singing and dancing. But a dark side also appears: in the notebook he uses to list new words he learns, he’s keeping a separate list—of people who he plans to make disappear. 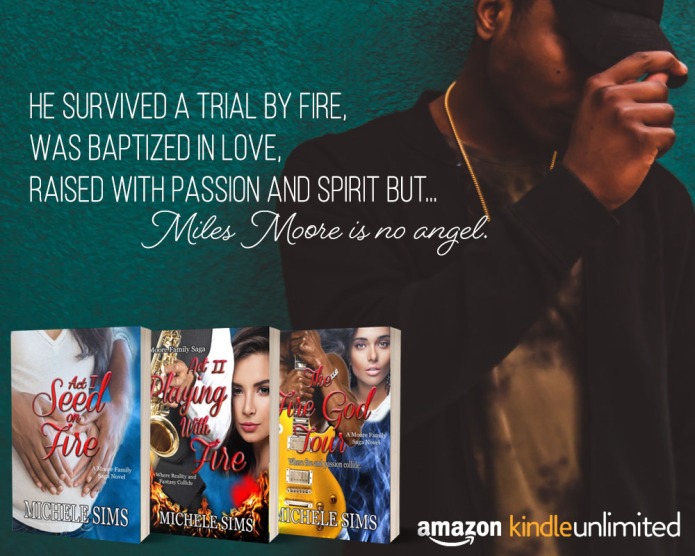 Miles Moore, baptized in the faith and raised in a spiritual family but…every thing he does isn’t Christian. Bella Wahlberg can’t save his soul but, she had the power to claim his heart. 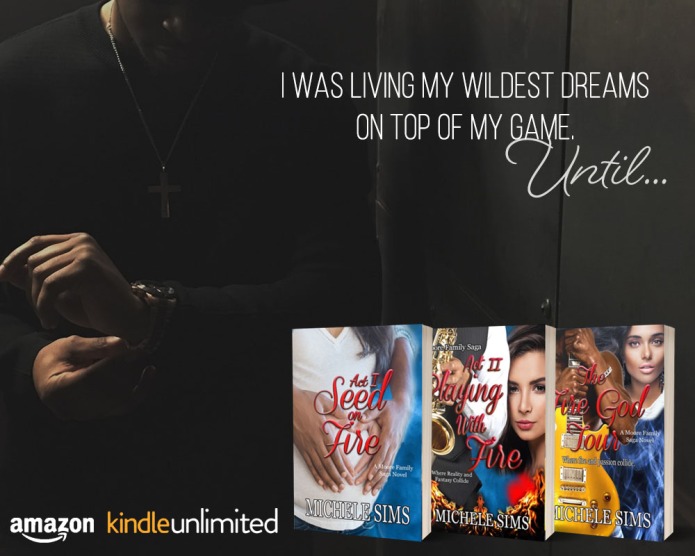 Michele Sims is the creator of the Moore Family Saga and the Fire God Series. She loves writing hot love stories and women’s fiction with multidimensional characters in multigenerational families. She is the recipient of the2019 RSJ Debut Author Award, 2018 RSJ Aspiring Author Award and first runner up in the Introvert Press Poetry Contest for February 2018.  She is a member of the LRWA, in Charleston, SC and the From The Heart Romance Writers’ online group.

She lives in South Carolina with her husband who has been her soulmate and greatest cheerleader. She is the proud mother of two adult sons and the auntie to many loved ones. When she’s not writing, she’s trying to remember the importance of exercise, travelling, listening to different genres of music, and observing the wonders of life on this marvelous planet.