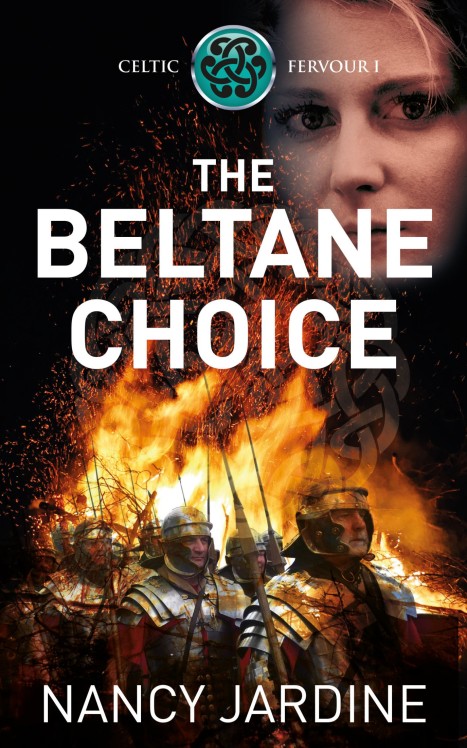 AD 71 Northern Roman Britain
Lorcan of the Brigantes knows that unity of the northern tribes is essential when the Ancient Roman legions advance northwards to Brigantia. Yet, everything comes at a price. Using his captive, Nara, as a political bargain with the Selgovae comes with impossible stipulations. Battle at Whorl – Iron Age tribes against the Romans – is inevitable.

Will Nara have her Beltane choice?

The adventures of the Garrigill Clan begin…

The story so far…

Nara of the Selgovae has been attacked by a wild boar but her rescuer has turned out to be an enemy Brigante who names himself Lorcan of Garrigill. When she realises he is still intent on seduction as his due for saving her – even though she has already managed to give him a minor flesh wound – she knows she’s in trouble…

Rolling away from him, Nara sidled herself upright. Unable to locate her weapons she used her feet, a swift kick that contacted his solid thigh. Lorcan’s amused rumble irritated her even more, because it had been a half-hearted kick from one who was warrior-trained.

“You lie.” He grinned, challenging her honesty before an expert spin took him out of her reach while she readied for another attack. Springing to his feet, he chided, “Admit it. Your body tells me.”

Incensed by the truth, Nara glared, a hot flush blistering her cheeks when he plucked her hands from the sword hilt she yanked up.

“Why should I leave you be? Did I not save you from the boar’s tusks?”

As he disposed of the sword Nara fought against frustration and confusion. “I am beholden to you for that, maybe, but that is all. Would you force me, Brigante?”

“You think I need to force you? Or any woman? As in your tribe, the women of mine mate when they like what they see.”

Arrogance dripped from him, confidence filling his gaze, though a glint of some humour twinkled there too.

“You have a high opinion of your prowess, but your fame as a fabled lover has not reached the Selgovae, yet.”

Her words had the opposite effect from she intended since her bold scorn stimulated the warrior even more. “Maybe you are the one who needs to inform your worthy bard of my skills. Time my prowess is tested?”

The sudden ripping startled her when his one tug burst open the leather strap around her waist, tumbling her pouches to the ground. Raising her tunic, the Brigante’s questing fingers tunnelled. The tightening and tingling at her chest drove her gaze skywards in confusion. A deep groan escaped while he whispered kisses at her neck, one hand reaching inside the gathered waist of her braccae.

“Dé thu a déanamh?” Her gasp shared the warrior’s breath. Her head swam from a lack of breath and something else. “By the Lady Rhianna? What are you doing?” Sagging against him her legs could no longer support her weight. “I cannot…” she mumbled, unable to think coherently. Like a runt puppy, she lapped up the scraps of his handling. Seeking. Something. Yet, she did not know what she sought.

“Aye. Let go. Let the feelings take you, Nara,” Lorcan muffled more encouragement into her ear. He changed her position against the tree his questing lips, tongue and hands continuing to roam. His fingers explored through the soft wool of her tunic before he pulled it clear of her head, the cloth unbearable when it scratched past her sensitised skin, the coarseness of the tree bark against her bare spine not mattering a whit. His lips continued their torment while he loosened his sword belt and let it thud to the ground. Releasing the thong of his forest-green braccae, he allowed them to glide to his knees. She felt the urgency in his movements.

“I’m a…aahhh!” The words of explanation died in her throat as the warrior’s twisting search found spots Nara had not known existed. Supporting her body against the tree, Lorcan wrapped her legs around his waist.

“What is wrong? Has it been such an age since your man took you?”

Wriggling away from him, she yelped. “Rhianna’s wrath be upon you! I have never coupled with any man.”

He held himself immobile before the breath rushed back into him; noisy inhalations through his nose. His eyes displayed great confusion when he stared at her, glazed with some enormous emotion Nara had no name for before they screwed tight shut for a few heartbeats. With a frightful force Lorcan yanked himself free and dropped his grip of her body as though scorched. She slumped to the ground, her hands flattening to bear her weight while she gawped up at him. His disbelieving eyes raked her, the veins in his neck pulsating, his breathing laboured.

“You cannot possibly still be an unmated woman?” Bewilderment shrouded Lorcan’s expression, but his fury was even more dominant. “You must be more than twenty summers?”

She refused to answer the man whose resentment could not possibly be greater than her own. Her gaze slid sideward, since she could not face the warrior who now despised her. 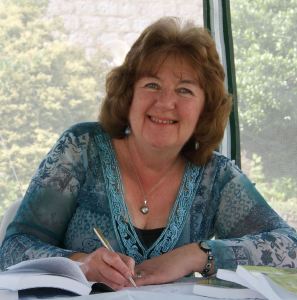 Nancy Jardine writes historical fiction; time-travel historical adventure; contemporary mystery thrillers; and romantic comedy. She lives in Aberdeenshire, Scotland, where life is never quiet or boring since she regularly child minds her young grandchildren who happen to be her next-door neighbours. Her garden is often creatively managed by them, though she does all the work! Her husband is a fantastic purveyor of coffee and tea…excellent food and wine! (Restorative, of course)

A member of the Historical Novel Society; Scottish Association of Writers; Federation of Writers Scotland; Romantic Novelists’ Association and the Independent Alliance of Authors, her work has achieved finalist status in UK competitions.

One signed paperback of The Beltane Choice (1 winner – UK Only)

One digital copy of The Beltane Choice (1 winner – Open Internationally)

*Terms and Conditions –Worldwide entries welcome.  Please enter using the Rafflecopter box below.  The winner will be selected at random via Rafflecopter from all valid entries and will be notified by Twitter and/or email. If no response is received within 7 days, then Rachel’s Random Resources reserves the right to select an alternative winner. Open to all entrants aged 18 or over.  Any personal data given as part of the competition entry is used for this purpose only and will not be shared with third parties, with the exception of the winners’ information. This will be passed to the giveaway organizer and used only for fulfillment of the prize, after which time Rachel’s Random Resources will delete the data.  I am not responsible for dispatch or delivery of the prize. 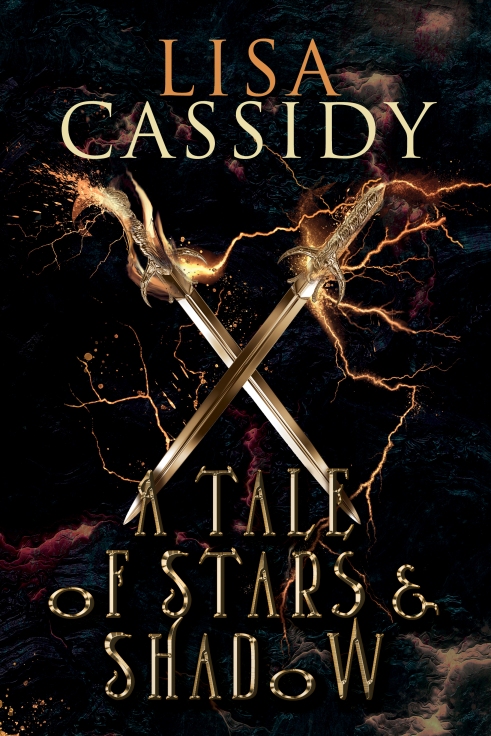 Dumnorix princess and born warrior, Talyn Dynan was the finest fighter of her generation. With her Callanan partner at her side, she was invincible, reckless, a death-knell to their enemies. But after her partner is torn away from her, Talyn is left broken, wracked with guilt and unable to regain the confidence she once had. Could an unexpected mission to the mysterious country of Mithranar, home of the magical winged folk, be the thing that saves her?

The Shadowhawk lives a life in the shadows. Constantly hunted for his criminal exploits, yet desperate to help the human folk of Mithranar who are oppressed by their winged folk rulers, he haunts the streets of Dock City. The arrival of a foreign warrior threatens to upset the carefully balanced life he leads, but when she begins to offer a hope for the humans he’s only ever dreamed of, can he risk trusting her?

And unbeknownst to both, a mysterious foe stalks the dark corners of Dock City. One that answers to a single purpose…

​Living in Australia’s capital, I’m a self-published author who mostly sticks to novel-length fantasy but occasionally likes to break out with short stories on random things like unicorns and ninjas. When I’m not writing, you might catch me enthusiastically spectating a basketball game (#NewYorkKnick for life!), reading a tonne of books, or…who am I kidding? I spend a lot of time writing!

All four books in my debut YA fantasy series – The Mage Chronicles – are  available for purchase, and I debuted a brand new series – A Tale of Stars and Shadow – in June 2019.

Whenever you buy a copy of one of my books, you’ll be helping to support One Girl. One Girl is committed to educating 1 million girls across Africa, and I’m SUPER excited to contribute to this vision. Together we’re changing the world, one girl at a time. 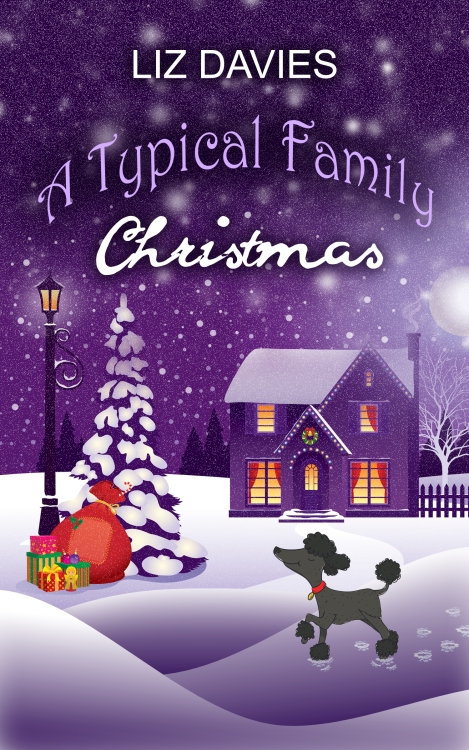 For once, Kate Peters would like a happy, family Christmas; the kind of Christmas seen in the movies. She wants harmony and happiness, smiling, glowing faces, tables groaning with food, carol singing around the tree. She wants love, kindness, and goodwill to all men, especially in her own house.

What she doesn’t want is drama. Absolutely no drama, whatsoever.

But what she gets is three stroppy children, two equally stroppy grandmothers, a husband who can’t manage to change a lightbulb, and Pepe the poodle.

It’s no wonder she feels unappreciated, overworked, and ignored. At the end of her tinsel-coated tether, and with the only Christmas spirit being in the form of a bottle of raspberry gin, Kate decides to leave them to it, and see how they manage without her.

A quiet little hotel somewhere near the sea, where she can pretend Christmas doesn’t exist, is just the thing she needs. Isn’t it? 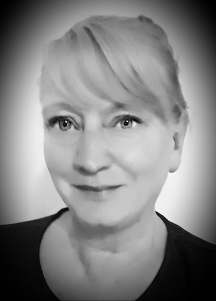 Liz Davies writes feel-good, light-hearted stories with a hefty dose of romance, a smattering of humour, and a great deal of love.

She’s married to her best friend, has one grown-up daughter, and when she isn’t scribbling away in the notepad she carries with her everywhere (just in case inspiration strikes), you’ll find her searching for that perfect pair of shoes. She loves to cook but isn’t very good at it and loves to eat – she’s much better at that! Liz also enjoys walking (preferably on the flat), cycling (also on the flat), and lots of sitting around in the garden on warm, sunny days.

She currently lives with her family in Wales but would ideally love to buy a camper van and travel the world in it.