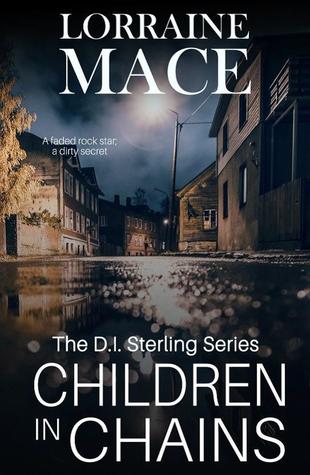 In Retriever of Souls, book 1 of the DI Sterling Series, Paolo Sterling and his team were hunting for a serial killer targeting prostitutes. This led them to question the women working the street trade for information as they tried to identify the monster taking lives. It wasn’t lost on Paolo many of the females he encountered were barely into their teens.

Connections made during that investigation are front and center in Children in Chains as Paolo searches for the person responsible for trafficking females for sex. But, it’s even worse than any of them believed. Teenage girls are forced to work the streets only after they are abused, violated, and addicted to drugs at an even younger age.

The DI is overwhelmed at times by everything around him—the dead ends his case keeps hitting because people are too terrified of the consequences of talking to the police; the cracks his team is showing; his fortieth birthday and the state of his personal life, and the physical recovery of his sixteen-year-old daughter, Katy, from the near-fatal attack she suffered in book 1. But don’t count the gutsy teen out yet. While she may still have a lot to come to terms with mentally and emotionally, she’s not one sit around and veg out. Love her spirit and wouldn’t be at all surprised if she followed in her dad’s footsteps.

Of course, with Katy, comes Paolo’s ex-wife, Lydia, who’s still an insufferable cow, placing blame for all wrong in her life on his shoulders.

Despite all that, Sterling is no less focused on the case, his frustration and anger always rumbling just below the surface.

He perks up after interviewing an aging rocker he suspects is connected with the trafficking, but is thrown for a loop and blindsided by betrayal from a member of his team. But Paolo also soon discovers the ringleader he’s searching for could have been in front of him all along.

Children in Chains in not an easy read. Stephen King said, “Fiction is the truth inside the lie,” and this author has done an extraordinary job of weaving just enough of the truth through the story to not only create an engrossing, suspenseful read but also incite heartache and sympathy for the victimized children as well as rage for their tormentors.

And just when I thought dealings with Lydia—remember her?—were relegated to the back burner, she’s had an epiphany, God, help us, and I was right there, cringing with Paolo.

Can Children in Chains be read as a standalone? Yes, but I don’t recommend it. While all the elements needed for the story are in this story, this series centers on Paolo Sterling, and while his character is evolving, he’s not dramatically changing overnight. The changes are subtle and readers should know where he’s been to understand where he’s headed. Grab books 1 and 2! 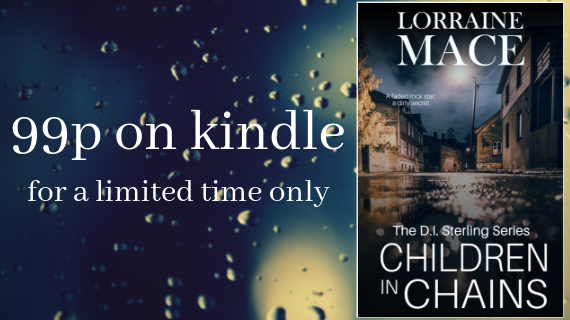 When not working on her D.I. Sterling Series, Lorraine Mace is engaged in many writing-related activities. She is a columnist for both Writing Magazine and Writers’ Forum and is head judge for Writers’ Forum monthly fiction competitions. A tutor for Writers Bureau, she also runs her own private critique and author mentoring service. She is co-author, with Maureen Vincent-Northam, of THE WRITER’S ABC CHECKLIST (Accent Press). Other books include children’s novel VLAD THE INHALER – HERO IN THE MAKING, and NOTES FROM THE MARGIN, a compilation of her Writing Magazine humour column.

This week’s theme is  “Cool/Groovy/Hip/Nifty/Radical/Swell.”

I went a little left of center with the theme this week and chose the sophomore album of TLC, CrazySexyCool.

Released in November of 1994, CrazySexyCool was met with critical acclaim and commercial success, peaking at number three on the Billboard 200, where it spent over two years. It was certified eleven-times platinum by the Recording Industry Association of America (RIAA), making TLC the first girl group in history to be awarded diamond status. CrazySexyCool has since sold over 14 million copies worldwide, becoming the best-selling album by an American girl group.

The album has since been featured on Rolling Stone magazine’s list of The 500 Greatest Albums of All Time, included in the book 1001 Albums You Must Hear Before You Die and was listed as a “New Classic” by Entertainment Weekly in 2008. The album was also ranked as the seventh best diamond-certified album of all time by Billboard.

The album’s third release, Waterfalls, became TLC’s most successful song, spending seven weeks at number one. It was also the second-biggest single of 1995 according to Billboard, earning TLC two songs in the top three of the 1995 Billboard year-end chart. Internationally, the song reached the top five in several countries.

[Verse 3: Left Eye]
Come on!
I seen a rainbow yesterday, but too many storms
Have come and gone, leaving a trace of not one God-given ray
Is it because my life is ten shades of gray, I pray
All ten fade away, seldom praise Him for the sunny days
And like His promise is true, only my faith can undo
The many chances I blew to bring my life to anew
Clear and blue and unconditional skies
Have dried the tears from my eyes, no more lonely cries
My only bleeding hope is for the folk who can’t cope
With such an endurin pain that it keeps ’em in the pourin rain
Who’s to blame for tooting ‘caine into your own vein
What a shame, you shoot and aim for someone else’s brain
You claim the insane, and name this day in time
For falling prey to crime
I say the system’s got you victim to your own mind
Dreams are hopeless aspirations in hopes of coming true
Believe in yourself, the rest is up to me and you