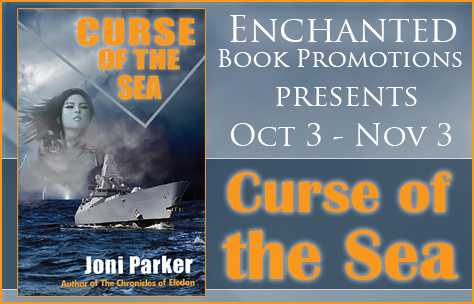 Title: Curse of the Sea

A NATO training exercise goes terribly wrong when five warships from different countries are mysteriously transported to Eledon, the Realm of the Elves. The warrior, Lady Alexin, is charged to escort the troops back home to London in the year 2031 with the aid of the Wizard Ecstasy and a magic shrinking potion. Yet, when the authorities question her story, Alex is detained and imprisoned under suspicion of terrorism. Caught in a web of politics, betrayal and bungling bureaucracy, the confusing world of the future will push her magical gifts to their limit, and her own future will hang in the balance, caught between “justice” and the place she calls home.

Alex continued with the introductions. “This is Captain Jonas. He’s the captain of one of those gray ships, the HMS Camelot. This is Ecstasy. He’s the wizard who came from the mortal world in this ship.”

Captain Jonas stared at him suspiciously. “How is that possible? How did you come here on this ship? It’s made of wood.”

“Yes, she’s my pride and joy—isn’t she lovely?” Ecstasy clutched his hands together. “If I’m not mistaken, you’re wearing the uniform of the British Royal Navy, am I correct, Captain, sir?” He snapped to attention and saluted like a Brit.

“Yes, do I detect a London accent?” The Captain returned his salute.

“Yes, Captain, sir, I’ve lived in London for many years. I still have a flat in Piccadilly.”

“How did you get here? What route did you take?”

“I flew up to the moon and took a left. There’s this round thingie in the sky and my ship flew through it.” Ecstasy made a circle with his hands.

“How many passengers can you take?”

“Ten. More than that, she doesn’t fly right. I once had a party with fifteen–”

“We have over seven hundred. It’ll take forever, but it’s a start. You can take us back to London. How long does it take?”

“About twenty-four hours. But I haven’t said I’d do it.”

“You will do it by order of His Majesty’s Royal Navy, Wizard or I’ll cut you down myself!” Captain Jonas glared at him. “Do I make myself perfectly clear?”

Captain Jonas nodded. “Very well. That settles that.” The Captain turned to Lord Odin. “Once our men have been returned, Ecstasy can continue to shuttle others back to Earth.”

“May I recommend the use of a shrinking potion so more people can be taken on each trip?” Lord Odin raised his eyebrows.

“How many people can we get on this ship if we used this shrinking potion?”

Lord Odin pursed his lips. “I’d estimate a hundred passengers could safely travel in that manner. I can send Alex to administer the counter-potion. It’s very safe, but we don’t have any here. I can have some delivered in a few days.”

After more greetings and introductions, Lord Odin took a white ceramic bottle from Canfis. “Ladies and gentlemen, this is the shrinking potion. I’ll administer it to Colonel Jeffrey so you can see it’s completely safe.” He took a glass tube from Canfis. “All you need is one drop in a glass of water. This phase will take about five minutes. Colonel Jeffrey?”

Jeffrey stepped forward and drank the water. Then he lay down on the floor on a blanket. Within seconds, his eyes were closed and he was sleeping soundly.

One of the sailors stretched out a tape measure. “He’s six-foot-two. That’s one hundred and eighty-eight centimeters for our metric friends.” Then he gasped as Jeffrey’s body shrank and checked the tape measure again. “Twelve inches? No shit! Thirty point five centimeters, folks.” He picked up the little body. “He’s light, around ten pounds, maybe five kilos.”

Captain Jonas knelt next to Jeffrey and put his head down close to his face. He touched his neck lightly. “He’s breathing and has a heartbeat.”

The crowd fell silent for a few moments before a nervous buzz arose.

Alex took the blue bottle and a glass tube from Canfis. Kneeling next to Jeffrey, she removed the stopper and slid the glass tube inside. She covered the end with her finger and carefully opened his mouth to place a drop on his teeth. She backed away, waiting and watching, as Colonel Jeffrey returned to full size.

The crowd gasped and covered their mouths.

The sailor measured him again. “Six-foot-two, back to normal.” He pushed a button on the case, retracting the metal tape with a snap.

Captain Jonas came over and extended his hand to Colonel Jeffrey, helping him up. “How do you feel, Colonel?”

“Fine, like I took a nap. Did I really shrink down?”

“Yes, you were about a foot long. We measured you.” He held his hands a foot apart to show him. “Do you feel dizzy or nauseated?”

Jeffrey took a short stroll around the room.

Lord Odin rose from his chair. “As you can see, there are no ill effects from this potion; you’ll be completely safe. It’s the best and fastest way to get you home.”

Fantasy novels are Joni Parker’s writing passion. Thus far, she’s written two series—“The Seaward Isle Saga,” a trilogy, and “The Chronicles of Eledon,” the award-winning four-book series. Her latest project, “Curse of the Sea” is her eighth book and begins a new trilogy. Her work extends beyond novels into short stories with two appearing in an anthology, “Tucson and Beyond” by the Tucson Science Fiction Fantasy writers’ group. Joni’s retired from military and federal government service and devotes her time to writing. She currently resides in Tucson, Arizona.

Win a print copy of “Curse of the Sea”!

2 thoughts on “#Excerpt2 “Curse of the Sea: Book One of The Admiralty Archives” by Joni Parker”