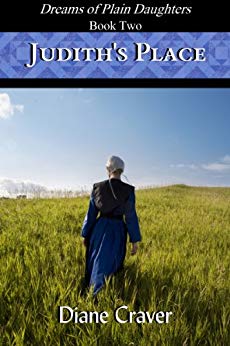 Judith Hershberger wonders what her life would have been like had she been born into an English family instead of an Amish one. Would she be happier with the freedom to obtain more schooling as an English young woman instead of being limited to only an eighth grade Amish education?

In Judith’s Place, the second book in the Dreams of Plain Daughters Series, schoolteacher Judith Hershberger yearns to learn more despite the educational restriction imposed on her because of her Amish upbringing. Wanting more than an eighth grade education, she puts off joining the Amish faith. During her rumspringa, she’ll be able to obtain her high school diploma without being shunned. Her father is afraid Judith will leave their Amish community if she passes the GED test. He knows she’s unhappy that Amish women are expected to follow a certain path in life.

When a non-Amish college student, Eliza Dunbar, observes Judith in her classroom, a friendship between the two young women develops. Eliza gives Judith the nudge she needs to study for her GED test. Eliza wonders what it would be like to switch places with Judith to live a simple life without electricity and other modern conveniences. Judith envies Eliza because she is free to attend college.

Jacob Weaver finally gets the courage to ask Judith to go with him to a Sunday singing. Like Judith, he wants to do something that isn’t allowed in their Plain community. Jacob wants to get his driver’s license so he can drive a truck to make the deliveries for the lumberyard. He needs to earn enough money to buy his own small farm. But even though it sounds plausible, Jacob feels stress with trying to learn to drive a truck instead of a buggy. Once he accomplishes this, Jacob plans to become baptized and join the Amish church.

Will Judith decide to stay in her Amish community or will she decide to leave in order to attend college? Will Judith’s friendship with Jacob influence her as she finds her place?