Chantel Hennings loves to work with children and her lifelong dream of opening her own childcare center has finally come true. At first she was a little hesitant to move back to the small town she grew up in with her sisters, because even though she has finally achieved her lifelong dream she also has a past—and his name is Garrett Brody.

Garrett Brody is floored the instant he walks through the front doors of his high school sweetheart’s day care center. Chantel Hennings was the one who got away—the one woman that he’d never gotten over. He isn’t surprised when Chantel doesn’t want anything to do with him. The way he’d ended their relationship was sort of harsh.

One thing was certain, now that Chantel was back within arm’s reach, he was more than willing to make the ultimate gamble to keep her there. 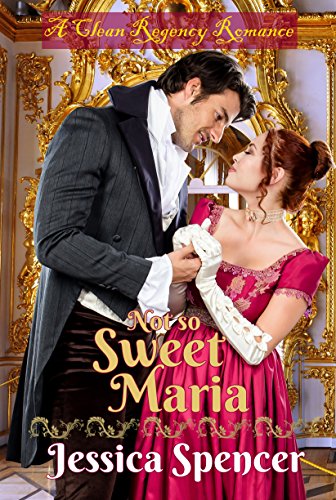 LOVE UNDER MISTAKEN IDENTITY.
The ton calls her Sweet Maria and, even in her fourth Season, eligibles continue to offer her marriage.
They do not know Lady Maria despises the hypocritical ways of Polite Society and is trying to sail away to America!

Though the granddaughter of a duke, Lady Maria is a Child of Scandal because her mother was an American commoner.
She blames the duke and the duchess for her parents’ death. Had they not disowned them, they would not have died of a virulent fever in America, leaving her an orphan at the age of five.

She has not forgotten the coldness she had met with as a child, and how there were those who examined her features for tainted blood, and disparaged her mother to her face.

She agrees to an arranged match to ward off her persistent suitors, treating the engagement as a sham one to be ended at her convenience.

Then, most unexpectedly, she finds love with a commoner.
Only he isn’t a commoner but the Earl of Daventon.

Gareth, Earl of Daventon is no stranger to Scandal. Rumour has it that his father had banished his mother for adulterous behavior. He remembers his mother as a sweet, gentle woman and knows the late earl yearned until his last breath to have her back.

Love is a quagmire and I shall not be caught in it, he decides. But love finds him. The object of his ardour is a mysterious young woman who dresses like a shop girl and behaves like a lady.

Lord Daventon remedies the situation by accepting an arranged match, his betrothed being Lady Maria whom he hasn’t met.

All of which leads to a delightful tangle of affairs.

Lucy knows the rules. Don’t go out under the full moon. Never travel in the countryside without silver.

But we all make mistakes sometimes…

When a sudden storm drives Lucy off the road, she takes shelter in an abandoned castle. The castle is surrounded by tall silver walls, so she thinks she’s safe. No werewolf can get past silver.

But not all walls are meant to keep things out.

Lucy only wanted shelter, but what she finds is a cage—and an alpha werewolf who will never let her go. She knows she has to escape, but she’s not sure what frightens her most: that the wolf will break her… or that she’ll enjoy it.

It’s five big, shiny stars for the third installment of The Haunting of Hattie Hastings!

Decisions have to be made and lives will be forever changed by the time this heartfelt story ends.

Picking up right where part two left off, Hattie Hastings has a full plate.

Is son Johnny at last on the path to happiness and success?

Rachel, her mother, grows visibly weaker but will the strong, independent mom who raised Hattie and her brother be able to beat the disease ravaging her body?

Barry was a good friend to Hattie’s late husband, but is that romantic interest in Barry’s eyes? Say it isn’t so! Please!

Has Cat lost all her good sense and taken back her wretched, deplorable, low-life ex-husband, Stewart? Hattie saw what she believed to be an intimate moment between them and cannot unsee it or bleach it from her brain.

Hattie is also at odds with her job at Express Yourself. She doesn’t want to be a barista forever but has no clue how to put her life on a different path.

However, before she can figure any of this out, Hattie Hastings must assist her ghostly husband with helping his young charge to move on by delivering a message to the boy’s parents.

Hattie would rather do anything else than visit strangers to tell them she had a message from their dead son given to her by her dead husband.

Can you blame her?

But that’s exactly what Hattie does because that’s who she is.

Hattie hasn’t led a charmed life. Life has taken more than a few swipes at her and gotten in some solid punches. But while Hattie may have been beaten up by life, she was never beaten down. She owns every second of her life with few regrets. If this is what this child needs and what Gary wants her to do, it’s done.

Regret does niggle at her though as she realizes that Gary’s time is growing short. His presence diminishes with each visit and Hattie must prepare herself to lose her husband…again.

This is a warm read of love and acceptance, and a perfect ending to Hattie’s hauntings. The author’s snarky humor adds the right touch to keep Hattie’s story from becoming maudlin and morose. This installment also gave more insight into the man Gary was/is and it’s not hard to figure out why he was the love of Hattie’s life.

And bring tissues. Lots of tissues… because there will be tears!

Nothing lasts forever … Gary’s time on earth seems to be coming to an end. His visits are less frequent and his visibility is fading fast. But he still has a mission to accomplish, which involves Hattie and her ability to pass on a heart-rending message.

Best friend Cat’s ex-husband is determined to prove that he deserves another chance, but do leopards really change their spots?

Times are tough for Hattie’s mother Rachel, but where there’s life, there’s hope …

Meanwhile, is there someone already in Hattie’s life who can help her move on when it’s finally time to say goodbye?

Get your tissues at the ready – both for laughter and tears – with the final installment of a trilogy that has been hailed ‘brilliant’, ‘hilarious’, and ‘a great feel-good read’.

Nothing lasts forever … Gary’s time on earth seems to be coming to an end. His visits are less frequent and his visibility is fading fast. But he still has a mission to accomplish, which involves Hattie and her ability to pass on a heart-rending message.

Best friend Cat’s ex-husband is determined to prove that he deserves another chance, but do leopards really change their spots?

Times are tough for Hattie’s mother Rachel, but where there’s life, there’s hope …

Meanwhile, is there someone already in Hattie’s life who can help her move on when it’s finally time to say goodbye?

Get your tissues at the ready – both for laughter and tears – with the final installment of a trilogy that has been hailed ‘brilliant’, ‘hilarious’, and ‘a great feel-good read’.

​Audrey Davis survived secondary school on the West coast of Scotland. Rubbish at science but not too bad at English, she originally wanted to be an actress but was persuaded that journalism was a safer option. Probably wise. She studied at Napier College in Edinburgh, the only place in Scotland at that time to offer a journalism course.

Her first foray into the hard-nosed newspaper world was as a junior reporter in Dumfriesshire. Duties included interviewing farmers about the prize-winning heifers to reporting on family tragedies. She persuaded her editor to let her launch an entertainment column which meant meeting the odd celebrity – or just the downright odd. From there, she moved to the loftier rank of senior reporter back in her home patch. Slightly more money, fewer farm animals but a higher crime rate. As Taggart would say: ‘There’s been a murrrrder!’

After a stint in London on a video magazine – yes, she is that old – Audrey moved to Singapore with her fiancé. She tried valiantly to embrace the stinking heat, humidity and lack of jobs, although she did work briefly on a magazine which was banned by the government for ‘artistic’ use of naked men’s bottoms.

Next on her adventures was a land Down Under where her main focus was raising Cost Centre One (aka firstborn) and coming to terms with the imminent arrival of Number Two. Still, she loved the Aussie way of life – BBQs, beaches and bring your own booze to restaurants – so it came as a blow when OH announced a move back to the UK. Not a job between them, the climate a possible deal breaker and an Exorcist-style vomiting infant on the flight home didn’t bode well …

Always a survivor, Audrey sought out similar-minded friends (i.e. slightly bonkers), got the children into a good school and thought about taking up writing again. Sadly, thinking about it was as far as she got, unless you count shopping lists. Then, hubby drops another bombshell. Switzerland. As in – it’s packing time again. Off to the land of cheese, chocolate, scarily efficient trains and a couple of teeny, tiny issues. Like driving on the ‘wrong’ side of the road and speaking a foreign language (French). The former was conquered fairly quickly (we’ll skip over the wall demolition in week two), the latter remains an ongoing battle of the hopeful against the hopeless. At least she provides amusement for the local workforce.
It wasn’t until 2016 that Audrey rediscovered her writing mojo with an online Writing Fiction course. From there, her first novel – A Clean Sweep – was born, although it took a bit longer than nine months from conception. A short, darker prequel – A Clean Break – followed, and in November 2017 she published the first in a novella trilogy, The Haunting of Hattie Hastings Part One. Part Two is published on 21 March 2018, with the conclusion following in July. After which she might have a wee lie down …

The Worst Book Ever: An Interactive Read-Aloud for Reluctant Readers

3.99 at time of posting! Kindle Unlimited!

Most bad books look forward to hanging out at rummage sales. Not this bad book. Its goal is to be featured in the library’s Banned Books List. Problem is, no one seems to notice… until the book teams up with its boisterous readers. Together, the book and its readers shout, wiggle, and sing to get the attention of a local librarian. Will this book see its cover on the library wall… or will it end up in the recycling bin? Full of bold, colorful graphics and laugh-out-loud humor, The Worst Book Ever is another colorful, graphical, high-lo book for reluctant readers by Beth Bacon. The meta-storytelling and interactive prompts get reluctant readers laughing, dancing, shouting—and reading. Ideal for read-alouds and story time, as well as independent reading for beginning to intermediate readers.

Like Beth Bacon’s other books, I Hate Reading, The Book No One Wants To Read, and Blank Space, this book helps make reading fun.