The trouble started with a dog. A girl and a dog, to be more precise.

“Hang on,” Ben Volkov said to his brother Nik on the phone. “Something’s happening.”

“No.” Ben lowered the phone and inched nearer to the brick wall, straining to see past the parked cars hiding him from view. Near the corner, a young woman appeared to be struggling with three gang thugs who were pushing her around, their yelling and taunts escalating to physical violence. By her feet cowered a huge shaggy mutt.

His gut knotted with disgust. He abhorred cruelty in all its forms, even more so because of his family heritage. The girl was obviously in distress, from her flushed face and harried expression, and the dog flinched and quivered each time the gang members stepped near.

He clenched his jaw and leaned back against the cool brick, his designer jeans and fine leather jacket out of place in this rougher neighborhood. Playing the white knight to a strange damsel in distress wasn’t his usual MO. Usually, Ben was the quiet one, the cool, calm, assessing one. But there was something about this girl, this situation, that refused to let him sit on the sidelines.

Knowing there’d be hell to pay from his brother later, Ben got back on the line. “I need to go.”

Nik rattled off a litany of Russian curses, blistering enough for Ben to hold the phone away from his ear for a second. When he got back on the line, he did his best to appease his brother.

“Look, I said I’d find Mishin and the money and I will. I just need to take care of something first.” Ben narrowed his gaze on the girl again. “I’ll meet you later to adjust our plans.”

“You better have a good reason for this, bro,” Nik said, though his threat held no heat. “Are you at least in the right place?”

“Yes. I’m in front of the address you gave me.” His heart tripped as the plaintive howls of the poor dog grew more intense. “I need to go. I’ll meet you at the bar in two hours.”

Ben ended the call without waiting for his brother’s reply. Adrenaline sizzled through his veins as he straightened his jacket then slid the phone into his pocket. It wasn’t his own personal safety he was concerned about. Hell, one didn’t grow up as a Volkov without learning early on how to fight.

No. It was this strange pull he had to rush to this strange woman’s aid. He was halfway to the corner before he even realized he’d moved. The girl turned and caught his gaze, her green eyes sparkling with anger. She was beautiful, he noticed absently as he neared the group.

Without warning, she rushed over to him, the frightened dog tangling around her ankles and nearly tripping her. She grabbed Ben’s hand and pulled him close, throwing her arms around his neck, kissing his cheek with her cherry-red lips. Her long black hair swirled around him, smelling of cinnamon and vanilla and his body tightened in response.

“Darling, I’m so glad you’re here,” she said, her voice determined and her smile overly bright. “I warned these guys you were on your way. This is my boyfriend and he’s going to kick your asses!”

“Yeah?” One of the thugs stepped forward, clearly unimpressed. “Him and what army?”

Ben inhaled sharply. He hated these overt displays of aggression, much preferring his drafting tables and construction tools to fighting. Still, when warranted, he could put the fear of God into just about anyone. 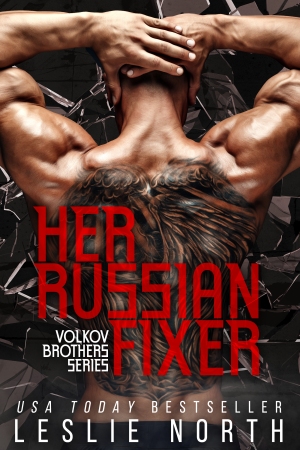 The line between right and wrong blurs when a ruthless Russian becomes her dark protector.

Benedikt Volkov grew up in Chicago, but his family’s ties to the Russian Mafia run deep. So when his godfather, Pyotr Mishin, steals millions from the Bratva, it’s up to Ben to find him or his family will be forced to pay back the money. However, his careful plans are quickly complicated when an impulsive brunette forces him to become her unlikely hero. Ben hates surprises, and uncontrollable Lucy with her luscious red lips is a distraction that could get them all killed. But with an unexpected connection to his godfather, she may be the key to securing his family’s future.

Lucy Paprocki may be reckless and disorganized, but she finds a new focus when her world is turned upside down. She’s determined to find her real father, Pyotr Mishin—a man she didn’t know existed until recently—and Ben Volkov may be her best chance. One look at his tattooed skin, muscled bulk, and penetrating stare, and Lucy knows Ben is Bratva. The mafia man may be hugely intimidating and wound tighter than a string, but Lucy will have to trust him if she wants to discover the truth about where she comes from.

With danger lurking behind every door, passion quickly ignites between impulsive Lucy and methodical Ben. They may just be using one another to get what they want, but what if all they really need is each other?

The truth of the matter is she loves her fictional persona, Leslie North, more than her normal, day-to-day persona! Her bestselling books focus on strong characters and particularly women who aren’t afraid to challenge an alpha male. Inspired after years of travel, her stories are set all over the world, from the tough streets of Russia to the beautiful beaches of the middle east.

Leslie fell in love with romance when she first picked up a scrappy, dog-eared romance book from her local library. She began writing soon after and the rest, as they say, was history. She now lives in a cozy cottage on the British coast and enjoys taking long walks with her two Dalmatians, George and Fergie.

Read SIX full-length novellas by USA Today best-selling author Leslie North for FREE! Over 548 pages of best-selling romance with a combined 1091 FIVE STAR REVIEWS! Sign-up to her mailing list and get your FREE books HERE!

Three lucky winners will get an eBook of Her Russian Fixer (two winners) or an audiobook of Her Ruthless Russian (one winner).