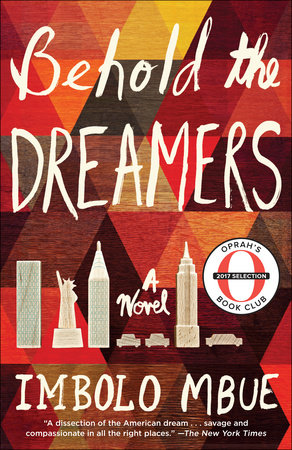 Jende Jonga, a Cameroonian immigrant living in Harlem, has come to the United States to provide a better life for himself, his wife, Neni, and their six-year-old son. In the fall of 2007, Jende can hardly believe his luck when he lands a job as a chauffeur for Clark Edwards, a senior executive at Lehman Brothers. Clark demands punctuality, discretion, and loyalty—and Jende is eager to please. Clark’s wife, Cindy, even offers Neni temporary work at the Edwardses’ summer home in the Hamptons. With these opportunities, Jende and Neni can at last gain a foothold in America and imagine a brighter future.

However, the world of great power and privilege conceals troubling secrets, and soon Jende and Neni notice cracks in their employers’ façades.

When the financial world is rocked by the collapse of Lehman Brothers, the Jongas are desperate to keep Jende’s job—even as their marriage threatens to fall apart. As all four lives are dramatically upended, Jende and Neni are forced to make an impossible choice.

While growing up in Germany in the 1930s, Rudolf falls in love with the girl next door, Gertrude. He doesn’t care what religion Gertrude practices but the Nazis do. When the first antisemitic laws are enacted by the Nazi government, Gertrude’s father loses his job at the local university. Unable to find employment in Germany, he accepts a position at Istanbul University and moves the family to Turkey. Rudolf, desperate to follow Gertrude, takes a position working at the consulate in Istanbul with the very government which caused her exile. With Rudolf finally living in the same city as Gertrude, their reunion should be inevitable, but he can’t find her. During his search for Gertrude, he stumbles upon Rosalyn, an American Jew working as a nanny in the city. Upon hearing his heartbreaking story, she immediately agrees to help him search for his lost love. Willing to do anything in their search for Gertrude, they agree to work for a British intelligence officer who promises his assistance, but his demands endanger Rudolf and Rosalyn. As the danger increases and the search for Gertrude stretches on, Rudolf and Rosalyn grow close, but Rudolf gave his heart away long ago.

How far would you go to find the woman you love?

Gertrude continued to cry and hiccup in his arms. With his right hand, he smoothed her blonde curls while shushing her and murmuring nonsensical words into her ear. When her breaths became less erratic, he loosened his arms from around her before grabbing her hand and tugging her towards her parents. Avi and Rosa Liebster stood at the top of the stairs leading into their townhouse and watched them approach.

Avi Liebster turned sad eyes on him. “Rudolf, my son, we can’t stay. You know this. Deep in your heart, you know this.”

Words escaped him. He couldn’t lie to the man who he had always known would be his father-in-law. There wasn’t a moment of his life in which he didn’t know Gertrude would be his wife. Until now. Now, she was leaving. Without him. No, not without him. “I’ll come with you.” He turned to rush down the stairs intent on packing up his life. A hand on his shoulder stopped him.

“You know that’s not possible.” The hand on his shoulder squeezed before dropping away. “Stay. Get an education. Become the man you are meant to become. You and Gertrude have time. When the time is right, you can join us.”

“Gertrude can stay with my family until …” His words petered out. Avi shook his head. He tried to implore Rosa with his eyes, but she turned away. “We can get married. She’ll be safe with me.” His desperate plea was met with silence.

“Rudolf!” The sound of his father’s voice startled him.

He turned to Gertrude. “I…” Words failed him. What could he possibly say to make things better? His eyes stung, and he took a deep breath before trying again. “I’ll come for you.” He leaned forward and brushed his lips against hers. “No matter what. I’ll find you, and we’ll be reunited.”

She flung herself at him, and he caught her in his arms. Sobs wracked her body with such force, he could barely hold on. He tightened his arms around her and leaned against the wrought iron handrail of the stairs to steady himself. He took a deep breath and brought her honeysuckle smell into his lungs.

“Rudolf.” His father’s voice came to him from one step below him. He turned to his father and watched as he nodded to the man standing behind him.

“It’s time,” Avi Liebster whispered the words before gently untangling his daughter from Rudolf’s arms. His arms felt empty as Gertrude was pulled from him. Would they ever feel anything but empty from this moment forward?

I grew-up reading everything I could get my grubby hands on, from my mom’s Harlequin romances, to Nancy Drew, to Little Women. When I wasn’t flipping pages in a library book, I was penning horrendous poems, writing songs no one should ever sing, or drafting stories which have thankfully been destroyed. College and a stint in the U.S. Army came along, robbing me of free time to write and read, although on the odd occasion I did manage to sneak a book into my rucksack between rolled up socks, MRIs, t-shirts, and cold weather gear. After surviving the army experience, I went back to school and got my law degree. I jumped ship and joined the hubby in the Netherlands before the graduation ceremony could even begin. A few years into my legal career, I was exhausted, fed up, and just plain done. I quit my job and sat down to write a manuscript, which I promptly hid in the attic after returning to the law. But being a lawyer really wasn’t my thing, so I quit (again!) and went off to Germany to start a B&B. Turns out being a B&B owner wasn’t my thing either. I polished off that manuscript languishing in the attic before following the husband to Istanbul where I decided to give the whole writer-thing a go. But ten years was too many to stay away from my adopted home. I packed up again and moved to The Hague where I’m currently working on my next book. I hope I’ll always be working on my next book. 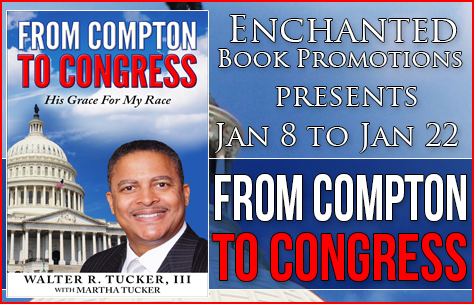 “Hello. This is Congressman Tucker.”

“Congressman, thanks for taking my call.”

The voice seemed eager and cunning, but somehow, credible.

“I’ve been informed by a reliable source that pursuant to a three-year investigation by the FBI the Justice Department will be filing extortion and tax evasion charges against you tomorrow.  Do you have any comment?”

This is a bad joke on a busy day.

“My name is Andy Pazstor, P-A-Z-S-T-O-R, a reporter with The Wall Street Journal.”

“Look, I have no idea what you’re talking about.”

Gotta be an old college buddy playing a sick prank. Or a friend of my father’s, trying to see what kind of stuff I’m made of. Maybe?

“The charges apparently relate back to the time when you were mayor of Compton, California in 1991. Can you think of any reason the Justice Department would want to indict you?” the reporter asked.

I let out a breath and spoke carefully. “Well, it’s an election year, and I can think of a lot of people who have political agendas.”

“So are you denying any wrongdoing?”

“Absolutely!” I felt defensive and agitated.

The whole thing was very mysterious, and yet something seemed real. Being an attorney, I knew that whatever evil was lurking out there would require an attorney.

“But, Congressman, you did serve as mayor of Compton, California in 1991, didn’t you?”

“Where’s all this coming from?”

“All I can tell you is what I know, not who I know it from.”

“Surely you can tell me who in the Justice Department is making the allegations?”

“You might want to talk with the U.S. Attorney’s Office in L.A. Other than that, I can’t help you, Congressman. I’m sorry.”

Abruptly, I hung up and stared blankly at the photos of those powerful leaders on my wall. Suddenly their internal voices rang through my twirling mind: “Don’t fret, Walter. All great men suffer trials.”

I yanked my tie loose, perspiring. I pulled a number out of my Rolodex. “Johnnie!”

There were not many defense attorneys, white or black, whose first name brought instant recognition. Attorney Johnnie Cochran, Jr. was one of them. My fingers hurriedly dialed the phone number to his L.A. office. As Johnnie’s number rang, I stared at Andy Pazstor’s name and kept thinking…three years ago…when I was Mayor. What in the world is this all about?

Title: From Compton to Congress: His Grace for my Race

From Compton to Congress reveals shocking criminal charges, based on an FBI Sting, that send Congressman Walter R. Tucker III reeling, and changes his life forever. Against the great odds of overcoming the tough streets of Compton, young Tucker fulfills his goals of becoming valedictorian of Compton High School, graduate of USC with honors, graduate of Georgetown Law School, passing the California State Bar, and filling his father’s vacant seat as Mayor of Compton—all by age 33. During his meteoric rise in the political arena, at age 35 he becomes the youngest African-American from California to be elected to a U.S. congressional seat. However, the U.S. Attorney’s federal indictment against him shocks the nation. Tucker’s choice to fight the charges against him thrusts him into a criminal trial that tests the condition of his human spirit and provokes us to reflect on every man’s plight versus every man’s fight.

Walter R. Tucker, III is a native of Compton, California. He graduated Valedictorian of Compton High School in 1974. After graduating from high school, Walter studied Politics at Princeton University for two years. After receiving his Bachelor of Arts in Political Science from U.S.C. in 1978, and his Juris Doctor from Georgetown Law School in 1981, Walter worked as a Los Angeles County Deputy District Attorney, established his own law firm, served as Mayor of Compton, and was elected to the U.S. Congress in 1993 – all by age 35. Walter R. Tucker, III is still the youngest African American to ever to be elected to the U.S. Congress from the State of California. In 2003, Walter became a pastor of a church in Chicago. In 2012, Walter and his wife, Robin Tucker, returned to Los Angeles and founded Truth and Love Christian Church, located in Carson, California. The church currently has over 300 members and 40 ministries in operation. Walter and Robin have been happily married for 30 years. They are the proud parents of Walter, IV, and Autumn and have one son-in-law, Spencer Rodney Sr., and one wonderful grandchild, Spencer Rodney, Jr. Walter enjoys morning walks on the beach and candlelight dinners with Robin.

FREE at time of posting.

Ginger is offered her first job as a private detective when her sister-in-law’s stage actor friend goes missing, and though the dress shop takes most of her time, Ginger takes the case.

But when a Russian grand duchess dies at the shop’s official grand opening event, Ginger ignores the missing person to chase a killer. It’s a decision she will live to regret.

Have you joined AWP Writer’s Club yet? What are you waiting for? 😉

As a brand new development, I’ve worked out a new addition to A Writer’s Path Writers Club.