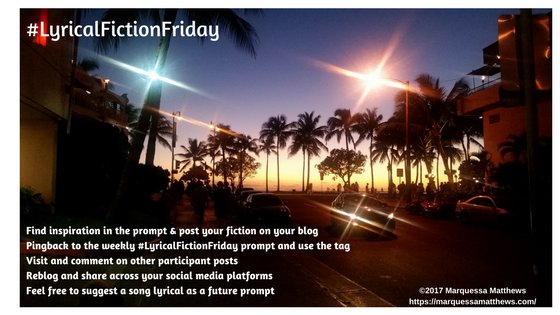 Lyrical Fiction Friday is sponsored by Marquessa Matthews of Simply Marquessa. For more info and to join the challenge start here.

This was not the New Year’s Eve she’d planned.

She should be in Crete, enjoying a breezy winter day while sipping dry martinis.

Those were the plans she and Rod talked about. Guess she should have known even then it was just talk.

Glynnis Crawford moved through the sea of bodies, smiling and greeting faculty members who knew it was best to stay on good terms with the school’s Registrar. Male staff members, emboldened by a few drinks, didn’t miss the chance to brush up against the buxom thirty-eight-year-old.

Reaching the bar, Glynnis ordered another martini but hadn’t taken the first sip when the noise level in the room rose.

Think of Satan and he appears… in a tailored suit.

Like some upscale version of Cheers, Rodrick Lincoln was warmly greeted by all as he crossed the foyer of the university president’s mansion.

Glynnis glanced over her shoulder to see men clustered around the American literature professor, handshaking and back-slapping. Rod beamed as women pushed in close to solicit promises of a dance… or more.

Was that Mira Kennedy from the Physics Department squeezing Rod’s arm? She had to be at least seventy.

Glynnis couldn’t blame her though. Rod’s model good looks of light, caramel skin complimented by a head of tiny, silken black curls lured women of all ages. His signature day old stubble gave him a rugged Miami Vice appeal and screamed Philip Michael Thomas. She’d noticed more than a couple men around the campus attempting to imitate the look.

Smirking, Glynnis made her way to the staircase. Rod was a beautiful package covered in the personality of a troll. He may not live under a bridge, but Glynnis knew his shortcomings.

The billiard room sat at the bottom of the stairs and Glynnis knew her small office team would be well into their third game by now.

She also knew Rod hated the game—because he always lost—and wouldn’t set foot in there to seek her out.

She’d leave Rod to the masses. He needed the attention and near-fanatical adoration.

Even at forty years of age, Rod needed the constant affirmation that he was unique and special. And worthy.

Glynnis tired of being on Team Rod after only a few weeks. It was exhausting playing to his massive ego. After deciding she’d had enough, Glynnis pulled away, becoming unavailable for lunches and dinners.

Rod upped his game though and turned on the charm. Fresh, yellow roses appeared on her desk, a gourmet catering service delivered her breakfast, and sonnets written on linen parchment filled her mailbox.

Glynnis pushed her irritation aside and gave Rod another chance, convincing herself she’d judged him too harshly.

When a server crashed the Friday before fall classes were scheduled to begin, Glynnis and her staff put their lives on hold and worked around the clock to rebuild and restore data and avoid chaos on Monday morning. So, it was an exhausted, dressed down Glynnis who arrived for Sunday Brunch with Rod. He was not pleased.

“No, I didn’t.” Glynnis signaled the waiter for a mimosa.

“No makeup, yoga pants… since when do you show up looking like something dogs wouldn’t fight over?”

Something in Glynnis’ head snapped. Tilting her head from side to side, she stretched out the muscles in her neck. The waiter arrived with her cocktail and she took a long drink before responding.

“I’m sure you’re aware, Rodrick, of the mainframe crash just after lunch Friday. I’ve had six pots of coffee and no sleep. I know how you hate to be kept waiting, and in the interest of time, a shower was all I had time for.”

Her hand tightened around the glass. She took a deep breath before responding, emphasizing each word. “Did you miss the part about no sleep?”

Rod waved her off. “Oh, please. Any number of women would lose sleep to share a meal with me.”

The buzzing began at the base of her neck.

Heat suffused her body as her mind warred with itself. Fed-up Glynnis wanted to put the self-centered hack in his place. But cool, composed Glynnis refused to give him the satisfaction.

“You’re right, Rod.” Turning up her drink, she emptied the glass and returned it to the table with a thud. “I’m not worthy of a man like you.”

He smirked, and all Glynnis wanted to do was slap the taste out of his mouth. Instead, she stood.

“I’ll do the honorable thing and step aside to make room for the throngs of women craving your time.” She looked at the area around the table. “I believe you have room to form a line on the right.”

The confidant Registrar took two steps away from her brunch partner before turning around.

She sauntered from the restaurant elated, no longer weighed down by the grueling tasks of the past forty-eight hours… or the middle-aged narcissist who’d never been worth her time.

Rod made several attempts to get Glynnis back during the semester, all to no avail. When the month between Halloween and Thanksgivings had no calls, texts… or overpriced gifts from Rodrick Lincoln, Glynnis believed—hoped—he was anywhere else annoying someone else.

Glynnis reached for the door handle, about to enter the billiard room, when she heard her name called out.

Damn! What did he do? Run across the room and down the steps? Might as well get this over with. She turned as Rod descended the last few stairs.

He approached her looking like sex on legs. Glynnis thought it was a shame that a man who looked better than men ten years his junior was such an asshole.

His eyes roamed her body, taking in the knee-length, silver cocktail dress with its low-cut bodice. Her thick, dark brown hair was pulled to one side and rested on her right shoulder, held in place by a comb which matched her earrings.

“You look amazing, baby. But then, you always do.”

Her smile was pure saccharine as she let his term of endearment slide. “Funny. I remember a time when you thought I looked like something dogs wouldn’t fight over.”

“Glynnis, you know I didn’t mean that. If you’d taken my calls… or answered my texts… or your front door, I could have explained I was having a bad weekend and took it out on you.”

“It’s all water under the bridge, Rod.” She caught herself before she could laugh out loud at her own joke. “Happy New Year.”

Glynnis turned to enter the room and join her staff, but Rod caught her arm.

She turned back, her eyes focused on his hand gripping her arm. He removed his hand and took a step back.

“We are a couple of hours from a new year… new beginnings. A chance to start over. I was hoping you’d give me another chance… that we could start over.”

Glynnis looked up into his deep brown eyes. She saw nothing… and felt nothing. He looked like a cool drink of water, but she knew he was just candy-coated misery.

She smiled, shaking her head. “No, Rod. I’m not the woman for you.” Glynnis reached out and squeezed his hand. “But I do hope you find her.”

She left him standing in the hallway, his eyes clouding with malice and contempt, as she joined her friends, ready for a new year… without him.

2 thoughts on “#LyricalFictionFriday | You’re So Vain”