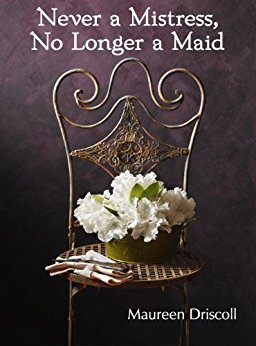 “Never a Mistress, No Longer a Maid (Kellington #1)”

ADVISORY FROM THE AUTHOR: This book contains mature content, including explicit language of graphic sexual situations. To quote a one-star review, “This was a story that felt like it was made just to write a LOT of sex scenes.” And, well, kind of, yes. If you don’t like explicit sex, this is not the book for you. If you like a lot of history in your romances, you may also wish to give this one a pass — history pretty much begins and ends with the reference to the Battle of Waterloo. But if you like a spicy story of a nice family in London and a laugh or two along the way, I hope you’ll sit back with a cup of tea (not mandatory) and enjoy. — Maureen Driscoll

Caught behind enemy lines at the Battle of Waterloo, nurse Jane Wetherby is forced to seek shelter with British operative Lord Edward Kellington. After a night of passion, the two are separated. With nothing but the alias Jane used to protect her family, Lord Edward is unable to find the woman he can’t forget.

Seven years later, Jane courts scandal by serving as the unofficial surgeon in the village of Marston Vale. When Edward arrives to formalize his betrothal to a viscount’s daughter in accordance with his late father’s wishes, Jane has no choice but to watch the match proceed. When a threat from the past emerges, Jane must join forces with Edward to safeguard her loved ones. But at what risk to her heart…

NEVER A MISTRESS, NO LONGER A MAID is the first novel in the six-book Kellington saga.

By Amal Chaaban, BLUSH Magazine
In one of the best historical romances released in the past two years, Maureen Driscoll introduces us to a heroine who is both vulnerable and strong. She is a woman who wishes to be a doctor at a time when women were to be strictly seen and not heard. The hero? A man who is just as hemmed in by society’s expectations of him (marriage trap included). This is the book to read when you want to experience the blush of love being discovered.