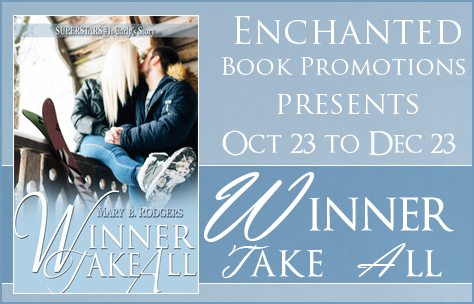 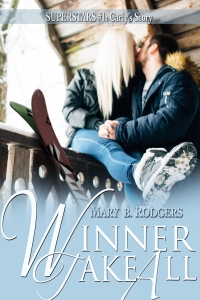 Hotshot skier and unrepentant party girl Carly Carrington is on top of the world until a disastrous crash destroys her championship dreams. Can she lower her guard long enough to trust the one man who might be able to heal her body…and her heart?

When it comes to sports doctors, buttoned-up Paul Blackburn is the best of the best. But when Carly upends his carefully ordered little world, will Paul fight his one chance at true love, or go for the gold in… WINNER TAKE ALL. 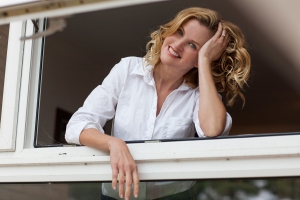 A career performer and storyteller, Mary was the keyboardist and lead vocalist in an all-female rock band for a number of years and has acted in leading roles in plays and musicals across the globe.

Her first screenplay, Common Ground, was a finalist in the Moondance International Film Festival competition, and she is a member of the Screen Actor’s Guild/AFTRA and the New York chapter of Women in Film and Television.

An avid gamer and unrepentant nerd, Mary’s been a fan of romance, science fiction and fantasy novels since she was old enough to hide them between the pages of her textbooks during geometry class in high school. She is delighted to introduce the first book in her new contemporary romance series, Winner Take All.

Two lucky winners will win a Kindle Fire loaded with “Winner Take All” and “Project Catchstar”.

Life is hard. There’s no secret in that statement.
Life. Is. Hard.
Simple enough.
But my life hasn’t just been hard…
I’ve gotten used to it over the years—come to expect it really. So when fate hands me yet another big f*ck you, I’m not even a little bit surprised.
Why should I be? I mean, after everything I’ve been through, why not throw my best friend’s ex-boyfriend into the mix and see how royally I can screw this up too.
It doesn’t matter that he loved her first.
It doesn’t matter that he’s wrong for me in every way possible.
It doesn’t matter that being with him could ruin everything.
One touch and I already know it’s too late.
When Dawn Breaks is a standalone Contemporary Romance.

Melissa resides in Cincinnati Ohio with her husband and two children, where she writes full time. 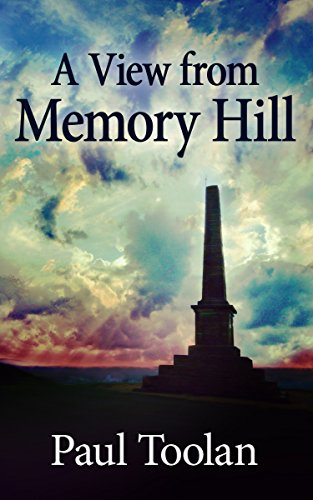 ‘Where do your stories come from?’

If only I received royalties every time a reader asks me this!

Here, there and everywhere is the true but unhelpful answer. In A View from Memory Hill, there’s a story called Old Man, Young Pub that was triggered by seeing … an old man in a young pub!

I was at the Brighton Festival [Brighton, England – I used to live there] with old friends/fellow retirees. We dropped into a wonderful, low-ceilinged pub called The Basketmakers, whose decor has barely been touched since it opened. I remember thinking we were the oldest people there, among many young and lively folk, some dressed in the trendiest fashion, some so far ahead they were next year. 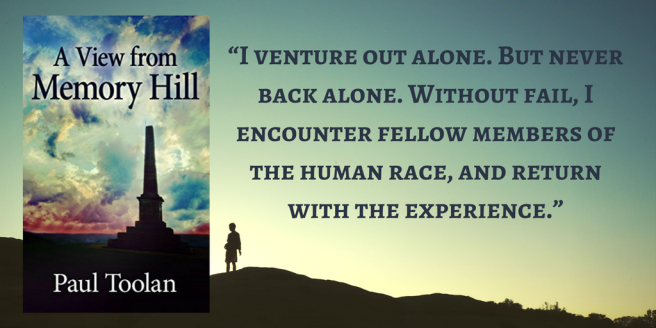 It was a hot day, but as I looked around I spotted an old gentleman in a tweed jacket and tie, standing at the bar, quietly sipping his pint. All around him, bright young things were loud and full of energy. They squatted on bar stools, but no-one offered a seat to the old guy, and his legs could have used one. I wondered about his silent thoughts.

His anonymity, mine too, amongst this colorful crowd threw up a name: Smith. With the conscious germ of a story now in my head, I called him Frank Smith in the hope he would eventually be frank enough to tell some sort of tale. I never spoke to this old man, but later when I sat at my keyboard, I spoke to Frank Smith or he to me. I really don’t know which came first.

What I had was a character and a setting. No plot, no events, no history. Yet. But Frank Smith traveled with me, later in the Arts Festival, to a shabby-chic little theatre where, on hard seats, we watched a trio of skilled actors on a bare, dark stage. Magically, they brought to life some of Damon Runyan’s New York Prohibition stories.

Shortly after, inside that inexplicable swirl called a writer’s head, two separate experiences merged. Frank Smith went to his local pub, and he went to see a play. To keep the story structure tight, I made the theatre a blacked-out room at his pub and had him go out of sheer boredom. Frank would have liked the Damon Runyan stories, but there’s insufficient conflict in what characters enjoy. I needed to change the play, to find one that Frank Smith liked less, that triggered something of his history, his demons or regrets.

On my bookshelves, I have Samuel Beckett: The Complete Dramatic Works. I browsed through it. Krapp’s Last Tape seemed ideal. It featured an old man’s memories, recalled with the aid of an old reel-to-reel tape recorder. Krapp is a drinker too, which resonated with Frank. While flicking through, I revisited Rockaby, a short Beckett play featuring an old woman in a rocking chair, remembering her past. Within moments, Frank Smith had a wife. 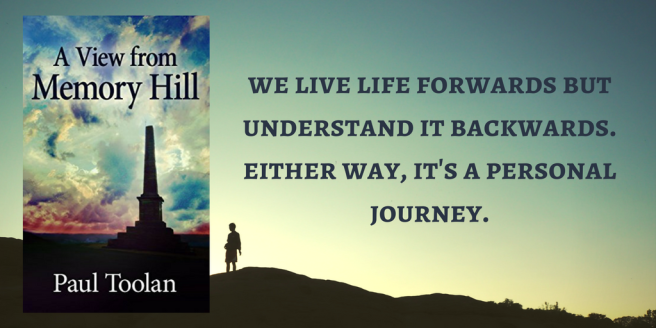 A day or two later, I named her Lucy. Then killed her off. The story would have become a novel if I hadn’t, and I wanted to balance Frank’s aging memories – of Lucy and others – with voices of youth. So along came the young woman who ushers the audience to their seats in ‘the long thin dark theatre’ where Krapp’s Last Tape is performed. Her surprise that Frank turned up at all, among so many young people, releases the demons that rumbled as Frank watched the play. Short stories need a moment of realization or change, and the clash between her enthusiasm for the play’s use of the past and Frank’s disturbed memories provided this.

‘We’ve all been something,’ was all he managed to say. ‘Known someone.’

The story might have ended there, but because the theme of age and youth was well-established I felt more could be done. I went back to the keyboard and jiggled the plot, making Frank inadvertently upset the ‘woman in black’, so her young hopes and dreams could quietly confront his regrets.

“In the half-dark, she looked squarely at him, black T-shirt and jeans appraising jacket and tie. A slight twitch flickered her lips. He thought there might be tears.

‘We all have dreams,’ she said, in the quietest voice he’d ever heard. ‘I’d rather dream than drift, any day.’ She pressed her lips together to control the twitch, but it continued. ‘What’s wrong with having dreams?’ she asked.”

This exchange then allowed a more positive development in Frank, making for a more satisfying conclusion [in my view, anyway, but I’d love to hear yours too]. 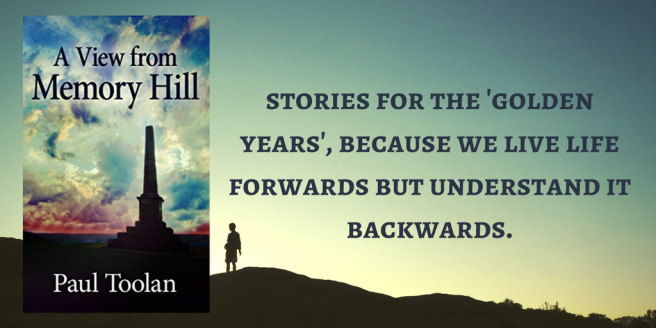 So, a chance observation in a pub, a visit to a play, a book on a shelf, some musings and experiments at the keyboard – and before too long there’s a character’s voice, a felt situation, and a set of realizations. If it was as easy as I’ve made it sound…

I drop into a pub maybe once a week. I’m wondering if I should go more often. Pubs are full of people, and where there are people, there are stories.

You can find A View from the Memory Hill here:  smarturl.it/avwm