From the Pen of Mae Clair

I’m celebrating a book birthday today and hope you’ll join me! A Desolate Hour, the final novel in my Point Pleasant series, is finally available for purchase. I’m wrapping up all the plot threads begun in the first two novels, A Thousand Yesteryears and A Cold Tomorrow. Caden Flynn and all my regular characters are back, along with a few new ones. The Mothman, of course, is front and center.

When I set out to write the Point Pleasant series, I envisioned the mystery relating to the origins of the Mothman spanning all three books. But I also wanted each book to focus on an aspect of Point Pleasant folklore in addition to my favorite cryptid.

In book one, A Thousand Yesteryears, I shared the history of the Silver Bridge tragedy. Book two, A Cold Tomorrow, saw the introduction of UFOs and Men in Black. The final…

Members of the Midtown Book Club are found murdered.
It is just the beginning of a series of deaths that lead Walt and Ox into the twisted world of a serial killer.
In the late 1960’s, the Zodiac Killer claimed to have killed 37 people and was never caught — the perfect crime.
Oscar Roach dreamed of being the next serial killer to commit the perfect crime.
He left a calling card with each of his victims — a mystery novel, resting in their blood-soaked hands.
The media dubbed him ‘The Librarian’.
Walt and the Kansas City Police are baffled by the cunning of this vicious killer and fear that he has indeed committed the perfect crime.
Or did he?
Walt and his wacky senior cohorts prove, once again, that life goes on in spite of the carnage around them.
The perfect blend of murder, mayhem, and merriment.

Award-winning author, Robert Thornhill, began writing at the age of sixty-six and in four short years has penned thirteen novels in the Lady Justice mystery/comedy series, the seven volume Rainbow Road series of chapter books for children, a cookbook, and a mini-autobiography. Lady Justice and the Sting, Lady Justice and Dr. Death, Lady Justice and the Vigilante, Lady Justice and the Candidate and Lady Justice and the Book Club Murders won the Pinnacle Award for the best new mystery novels of 2011, 2012 and 2013 from the National Association of Book Entrepreneurs. Many of Walt’s adventures in the Lady Justice series are anecdotal and based on Robert’s real life. Robert holds a master’s in psychology, but his wit and insight come from his varied occupations, including thirty-three years as a real estate broker. He lives with his wife, Peg, in Independence, Missouri. Visit him on the Web at http://BooksByBob.com

Despite the constant interruptions of LIFE (You’re hilarious, LIFE — quit it!), I’ve made it to the midpoint of my goal right at the middle of the month. That never happens. This is an unedited excerpt of Calla, my Camp Nano project.

Time for her speech and toast.

Standing and walking over to Gibson, Calla pulled a face at the good-natured comments from the wedding guests.

Her poker face grew into a wide, warm grin. She looked around the room, seeing people who’d known her for a lifetime, knowing they only wanted her to be happy.

When Calla raised the mic to speak, Gibson, who was still at her side, pulled the mic in his direction.

“Don’t worry, Reedsville fam, I have plans for Miss Calla.”

Catcalls and whistles rose in the room again, with…

A Present from the Past! 😄 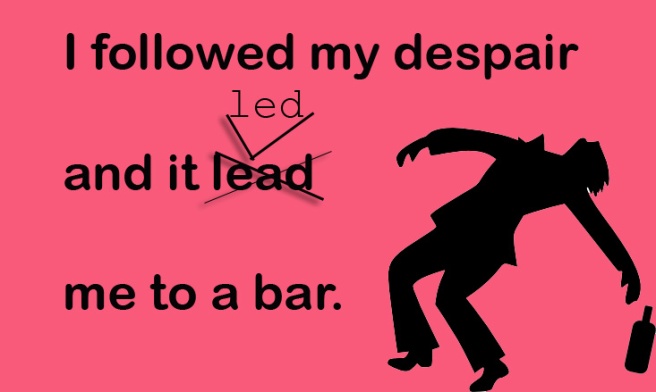 It was mid afternoon as Grammar Smith walked into the Hunt and Peck after an extended shift at the Department of English Language Offenses. She just wanted a quick glass of Chardonnay to unwind before heading home.

The bar was pretty much deserted. Grammar sat down a couple of seats away from Led and Paid, and ordered her drink.

Led just grunted and stared into his beer.

“Not sure I’d say it was rough, more like complicated. We had to track some subject-verb agreement offenses over at Fustian University. It took way too much time. What about you two? What are you doing here in the middle of the afternoon?”

Led snorted, looked up at Rocky, the bartender, and said, “Again.”

She brought him a shot and a beer.

Write What You FEEL

Because of reasons, I’m going to dive back into the importance of “show, not tell”.

What are the reasons? Well, I’m not going to talk about it because I don’t want to traumatize my readership, but if you hop on to my Twitter and scroll back a few days, you’ll see some nooooooooooo gifs with the hashtag #AllTheBoats.

That’s my vague reaction to what I was suffering through, and what inspired me to draft this post. 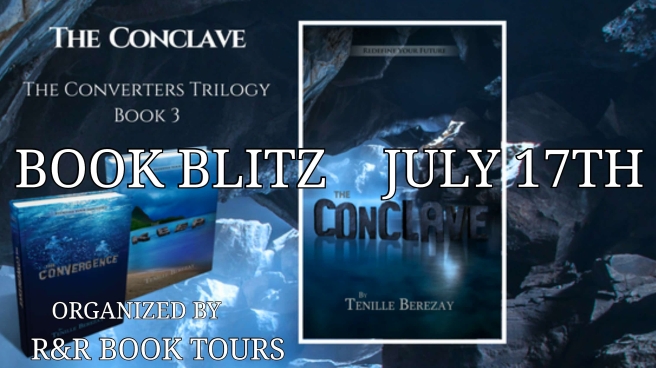 “The Conclave (The Converters Trilogy Book 3)”

Having escaped the dangers of The Keep, Desiree is determined to free Blake. But when a government-enhanced converter goes rogue, the ensuing battle for power, control, and lives makes Blake’s rescue a secondary mission. As Desiree struggles to overcome past demons and new, stifling expectations, she faces converters more powerful, dangerous, and desperate than ever. To protect those she loves, redeem the convergence, overtake The Keep, and honor the Conclave, Desiree will have to redefine her future.

THE CONCLAVE is the intense, action-packed final book in the Converters trilogy; the conclusion of Desiree’s journey.

Pausing at the door, I peer through the tiny window into the lab. Just as the doctor said, Michelle is there, her bright skirt touching the floor, her glasses firmly planted on the bridge of her nose, her small frame hunched over a stool.

The lab is like her; mostly organized with small spaces of chaos. Reminding myself of my sole purpose for visiting, my solitary question, I push through the door.

Glancing up, Michelle stills at the sight of me. Between open shelves filled with metal plates, computer chips and various other tools, her eyes go wide. Under dark frames her blue gaze studies me intently before softening. “Desiree,” she says and I can almost believe she missed me.

I pick up a remote-like object from the counter, shifting it from one hand to the other, suddenly as awkward as the scientist in front of me.

“It works almost like a magnet, you pass it over an ankle band or an Equalizer and they automatically open,” Michelle says, before stopping abruptly.

I set it down, thinking of the many times a device like that would have come in handy. Looking to the ceiling for surveillance cameras, I ask, “Is this lab secure?”

“One of the most secure locations in the building.” She glances down at the counter before her. “Damiz wanted all my inventions kept secret.” As I round the counter, I can see the pencil swinging in her hand, the drawing laid out before her.

She looks back to me, curiosity overcoming her guilt. “What about Talbot?”

“How many secrets is he demanding?” I rap my fingers on the counter.

Michelle glances to the exit. Flipping the pencil, she taps the eraser on the paper. I allow the awkward silence, my fingers drumming, opposing her nervous beat.

Finally, her hand stills. The pencil drops and her shoulders slump. “The number doesn’t matter, does it?” I inch forward to hear her quietly whispered words. “One is enough. Enough to condemn me.”

Condemn. That’s what I’ve done to her—put the weight of my expectations and disappointments on her. If she had had more fight, would I have had less of one?

Staring vacantly at her paper, she reaches for the discarded pencil. “The least I can do is keep my work from hurting anyone else.”

“Do you trust Talbot?” I ask the question that’s been growing, clawing at my resolve since I stepped into Amplified Industries. The question I keep asking myself.

Michelle’s face becomes open in its honesty. “I don’t trust anyone anymore.” Her confession comes out pained. It was what I expected but hoped not to hear.

I shift away from her hurt, turning to the door. There, I pause, hand on the doorway when Michelle’s says, “It seems like the more secrets we have, the more threatened we are.”

Without turning back, I answer, “Then maybe it’s time to stop hiding.”

~ Other Books in the Series ~ 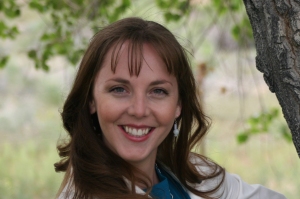 After living throughout the western U.S., Tenille now claims rural Northern Nevada as her home. If she’s not being consumed by a book—whether her own or another author’s—she’d like to be found horseback riding, backpacking with her high-school sweetheart/husband, or photographing their three beautiful children.Tenille loves to read any genre (as long as there’s great dialogue with a touch of snark). She believes in authentic characters, romantic sub-plots, and realistic, happy endings.