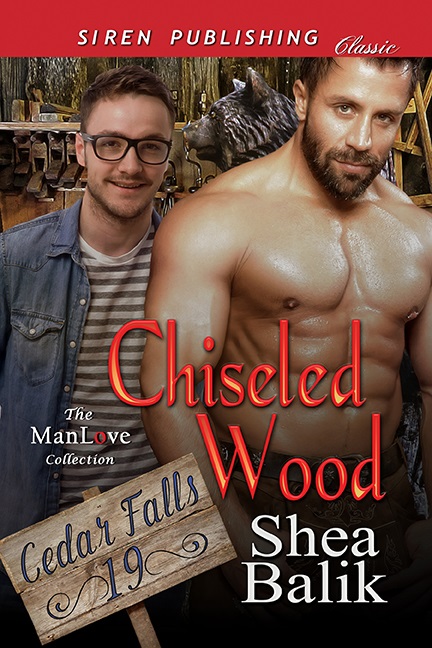 When a huge grin appeared on Parker’s face along with a radiant kind of happiness that only appeared when he was around his husband, Aaron knew Jesse had to be the one who had just caused the bell above the door to jingle as he entered.

“Angel,” Parker said, even as he got up from his seat and headed toward the front.

Not really wanting to see the pair kissing when Aaron’s own love life had been bleak as of late, he continued to eat his chili. He could greet Jesse when he joined them, as Aaron was fairly certain he would.

“Parker, I’d like to introduce you to the new manager of Nice ‘N Rosy,” Jesse said. “Kyler Prince, this sexy man is my husband, Parker.”

“Kyler,” Parker said. “I’m so glad to meet you. Would you both like to join us for lunch?”

Aaron silently groaned. They were in a booth. That meant Aaron would need to make room, which was a bit awkward. Using chainsaws, handsaws, and axes to chisel the logs he used to create his works of art, not to mention having to lift those heavy logs, had built Aaron’s muscles. It made it a tight fit to put another person on the bench with him.

“We’d love to, wouldn’t we Kyler?” Jesse asked without actually letting the man speak. Then again, when Jesse wanted something he rarely gave those with him a choice in the matter.

“Oh, uhm,” a soft voice Aaron assumed was Kyler, said. “Actually, I don’t have any money for lunch.”

But, as if the man hadn’t said a word, Jesse tugged him to where Aaron still sat. “Hey, Aaron,” Jesse said as he slid into the other side of the booth. “This is Kyler. He’s new to Cedar Falls.” There was a twinkle in Jesse’s dark eyes that instantly put Aaron on edge. “Maybe you could show him around. Help him find a place to stay. Even take him to the casino so he can see that Cedar Falls has some interesting night life.”

“Oh, but,” Kyler tried to interrupt, but Jesse, being Jesse, didn’t pay him any attention.

“How about it, Aaron? I hear there is a slot tournament at the casino and they are introducing the new chef at Bliss tonight with a special menu.” But instead of waiting for Aaron to answer, Jesse turned to his husband, who had slid into the booth next to him, leaving only Kyler still standing. “Shane claims this new chef is really good. How about we make a night of it? I could invite the gang to give Kyler a chance to get to know them.”

Parker hadn’t said a word when Jesse turned first to Kyler, then to Aaron and said, “Aren’t you going to scoot over and let Kyler sit down?”

“Sorry,” Aaron said as he moved over. It wasn’t until Kyler actually sat down that Aaron really looked at the man next to him.

Dull brown eyes stared at him through thick black rimmed glasses. Nothing about Kyler was anything but plain, ordinary. Even his dark hair seemed to just sit on his head as if it had no style. Then there was the obvious fact Kyler was as uncomfortable being there as Aaron was, especially since he had to be partially pressed up against a relative stranger because Aaron’s large body took up most of the seat.

Feeling for the guy, who clearly was out of his element, Aaron stuck out his hand. “Aaron Garnett. It’s nice to meet you Kyler.”

Kyler peered at his rough calloused hand as if it might just bite him, but eventually pressed his hand in Aaron’s. “Nice to meet you to,” he said.

“Good,” Jesse said as he pushed at Parker to get back up from his seat. “Now that you two are friends, Aaron, would you mind walking Kyler back to Nice ‘N Rosy while Parker and I make the rounds to our friends to coordinate tonight?”

Aaron opened his mouth to object. Not that he minded walking Kyler to work, but he had to get back to his own shop. But, in usual Jesse fashion, he wasn’t given the opportunity to say anything.

“Make sure to set up a time and place for you two to meet so you can take him to the casino tonight.” Jesse pulled Parker by the arm toward the door. “I’ll arrange dinner for six, which will give us plenty of time to gamble afterward.”

The door opened and Parker and Jesse headed out with a final wave. “See you both tonight.”

Then they were gone.

Aaron’s gaze went from the now empty doorway to Kyler. He’d seen Jesse do this in the past, but it was always to others, not him. Now what was he supposed to do?