A deft mix of spy thriller and romance set against a backdrop of real events, namely the 1991 collapse of the Bank of Credit and Commerce International (BCCI), the first of the recent wave of big financial scandals. Evanoff’s protagonist, Louise Moscow, is a sexy, smart, likable heroine who finds herself enmeshed in the shadowy world of high finance and international espionage. Set in New York and Paris, Ms. Evanoff weaves in historical details with her fast paced thriller making this a riveting and educating read.”

He prayed silently as he approached the front door of the family home he no longer owned. As he opened it, feeling the unlatched door give way, he knew he had arrived too late. The sound of his wife weeping echoed in the other end of the house, and a single gunshot rang out. He ran to the back parlor, but a man in the doorway blocked his entry. His wife lay on the temple bed, naked, bruised; a single line of blood mixed with snot dripped from her nose. The worst had happened. She stared blankly at the smoke rising from the gun barrel pointed down at her dead brother-in-law.

The man stood motionless, gripping the briefcase full of cash, an utter failure. The gun now pointed in his direction as the killer-rapist walked toward him. The accomplice continued to restrain him with a raised finger. Young, barely twenty-five years old but wise in the ways of rape and murder, he tucked the gun into his jacket and slipped the briefcase from the man’s grip. He opened the case and eyeballed the amount of cash. He removed one bundle and handed it to his victim. “Spend what you have left wisely, and don’t do anything else foolish.” The killer nodded to his cohort that they were leaving.

“You are from a good Pakistani family, a fellow Mohajir. There is nothing noble in what you are doing,” the man whimpered.

“And yet you are still alive.” The two thugs walked out and continued casually down the road, confident no one would pursue them.

Chicago native Lorraine Evanoff has worked over 20 years in the film industry on both sides of the camera in Los Angeles and Paris and has multiple film credits to her name. She also worked in Silicon Valley doing corporate finance during the dot.com era. Foliage is her debut novel inspired by events that occurred when she was living in France. She currently resides in Los Angeles with her husband, where she is writing her second novel and developing scripts.

PICK UP THE HARDBACK!

Thomas Ramsay has three rules:
One night
No expectations
No bullshit

Julianne Griffith has three rules:
One night
No feelings
No beds

When a man who doesn’t believe in love collides with a woman who has no use for it, the resulting explosion is much more than they are prepared to handle.

Meeting your match doesn’t always lead to the kind of happy ending you expected, especially for those who have vowed never to love.

*Can be read as a standalone*

I needed to remember who I was. Julianne Fucking Griffith didn’t take shit from anyone.

“This was supposed to be a one-night stand. Then it turned into three. Then the limit was waived. Then emotions got involved—” Thomas opened his mouth to offer a rebuttal, but before he could, I raised my hand. “—I’m not talking about love or any other bullshit. You were really angry with me, and that made me feel angry or hurt or something. Whatever it was, I didn’t like it.”

Before I could pull the door open, I felt Thomas’s body heat invading my personal space from behind. “Julianne…” he whispered.

Strong hands wrapped around my waist, guiding me as I turned to face him. My entire body quivered as I stood in place, anxious because I knew what was coming, but I had lost the ability to speak, and I couldn’t pull away. As his lips moved closer to mine, the desire to stop his advance vanished.

Other books in the series:

Aimie Grey didn’t read a single book until she was in her early thirties. One fateful day, her friend decided to put an end to the madness and shoved a steamy romance novel under Aimie’s nose. After being forced to read one of “those” scenes, Aimie went home and bought the book, and the next one, and the one after that. In the two years since, Aimie has read close to four hundred books. Somewhere along the way, she became frustrated with reading repetitive stories revolving around the experienced man seducing the still virginal woman. Aimie decided to take matters into her own hands and wrote her debut full length contemporary romance novel Never to Keep.

In addition to her day job as an IT system administrator, and her new evening gig as a writer, Aimie’s primary role in life is wife and mother. Aimie lives in the Midwest with her husband and two teenage daughters. (Now you know why she needs those books!) 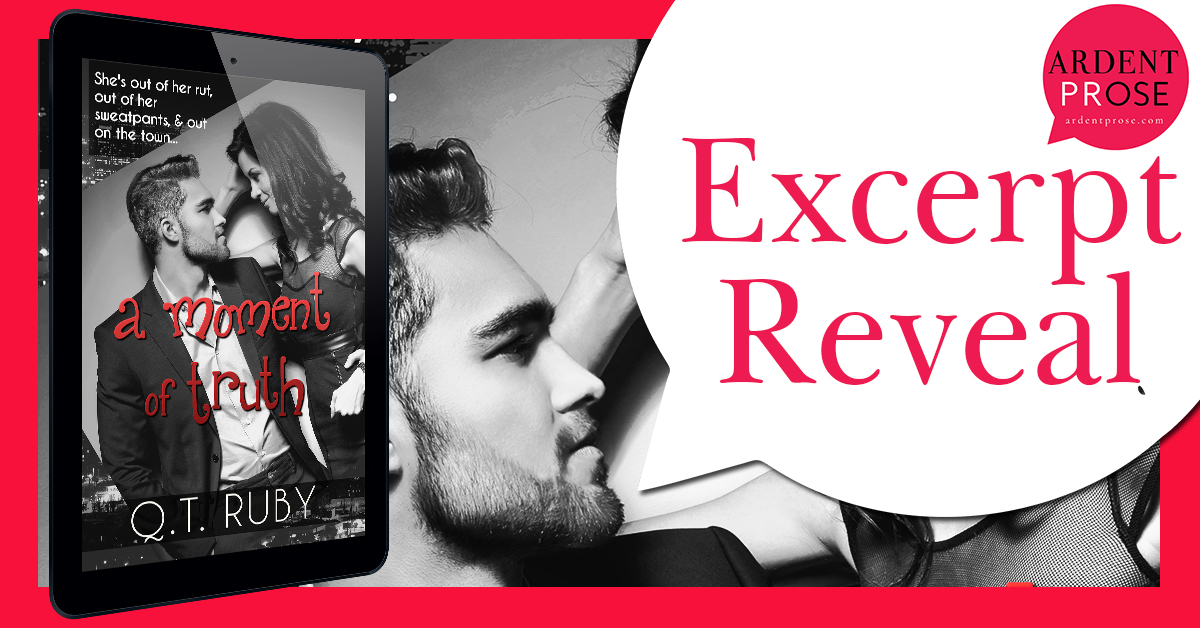 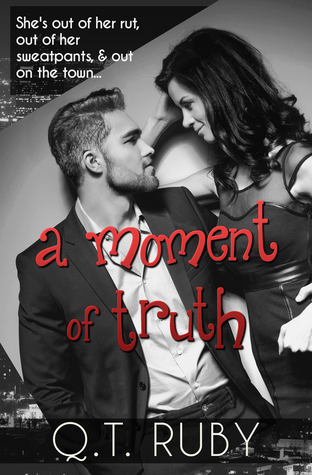 Claire Parelli has been liberated!

Back to living it up in the Big Apple with her best friends, Claire embarks upon her dream career during the day, and steams up her nights with Daniel Chase, a.k.a. Mr. Beautiful, Hollywood’s hottest leading man. Life is simply perfect.

But for how long?

Claire knows all too well that fairy tales just don’t exist, even if she does have Fairy Slutmothers on her side. Real-life comes with real problems that don’t simply vanish with a quick flick of the wand. So this time around Claire discovers that it isn’t just a matter of trust—it’ll be a moment of truth.

I’ve always loved the buzz in the air between Thanksgiving and Christmas, and this year is no different. Except, well, it is. My head’s wrapped around three things: the need to finish this composition that’s driving me nuts, the future of spending Christmas in London with Dan’s family, and spotting Dan’s face on all sorts of magazines at newsstands I pass every day. But right now, thanks to Bridget, the TV in my apartment is blaring, “Up next: Dan Chase!”

“Claire!” she calls to me from the living room couch.

“Be right there! You guys want any chips?” I ask as I begin dumping some into a bowl.

“Just get in here—he’s almost on!” Bridget yells.

“I’m not sure I should watch him,” I say, carrying my drink and chips to the couch and setting them on the coffee table.

“Why not?” asks Camille. She grabs a handful of chips.

Camille gives me a sideways glance. “You’re weird. He wants you to watch.”

“Sit down and shush,” Bridget says as the opening to Ryan Rockford’s Late Night Show begins. The host does his monologue, and when he mentions Dan’s name, I can hear how predominately female the audience is—and how loudly they can scream, too.

It takes forever for Dan to finally be introduced, but when he is, he comes out from the side of the stage and sets the world on fire. Or maybe that’s just me because I cannot peel my eyes from the TV. There’s that smile I love, and he’s dressed in a deep green button down shirt, a relaxed sports jacket, and he’s waving to the audience. He exudes confidence and sexiness—out of all of his fine pores. My God. I’ve been under his spell many times, but seeing him through the distance of the TV, and I’m almost more mesmerized than ever. Shouldn’t I be less affected at some point?

Camille elbows me. “He looks good, huh?” She laughs and laughs because I’m only able to whimper. “And you didn’t want to watch. Ha!”

The audience has yet to calm down. Ryan laughs while Dan smiles and blushes. “All right, everyone, just calm down,” Ryan says. He strokes Dan’s arm. “He’s very soft, too, ladies.” The screams erupt again, and Ryan playfully scolds the audience to quiet down.

“Thank you. It’s nice to be here, and thank you for that welcome,” he says with a nod to the audience.

Dan smiles playfully—he knows where this is going. So do I actually, because they always wind up an audience and go for the hot gossip first. More cheers from the crowd. Another shy smile from Dan. A shriek of “I love you, Dan!” is heard clearly.

“You’ve been working nonstop the last few months, but our lovely audience wants to know what kinds of things you do in your free time,” Ryan says with a smile that makes me nervous—not sure why. Dan seems unfazed.

“I don’t have much free time, but when I do, I pretty much lie there and stare at the ceiling. Sometimes I go really crazy and order Chinese or pizza.”

The audience laughs. I do, too. His charm is so easy, natural.

“Which is your favorite—Chinese or pizza?”

“Depends on the day. Sometimes I’ll just pour a bowl of Lucky Charms,” he says, looking right into the camera. My heart leaps—that comment’s for me—and I smile like an idiot.

Camille and Bridget crack up.

“Wow—I didn’t figure you to be a Lucky Charms fan,” Ryan says.

Ryan and the audience laugh again.

“It’s good to have friends who broaden your horizons, right?”

“Speaking of friends, it seems like you made some new ones this year.”

“Oh yes. Any special friends you’d like to tell us about? Maybe this one?” A picture of us in Mexico flashes up on the large screen behind them. It’s a bit grainy, but we’re mid-walk, wearing swimsuits, and are as happy as can be. I gasp.

Dan twists around to see the photo and turns back, glancing down and shaking his head slightly, perhaps trying to hide that full-wattage smile he’s wearing. He finally looks up, and his face is flushed. He shifts in his seat.

“Who’s this friend, Dan?” There are grumblings in the audience and a few boos.

Dan turns to the audience. “She’s a good friend of mine.” He smiles.

“Just a friend? There’ve been rumors that you’re off the market,” Ryan says playfully.

“I’d like a good friend like that, too. Have any you can spare?” Ryan says, laughing. “All right, well, we’ve got to go to commercial, but we’ll be back with more Daniel Chase!” 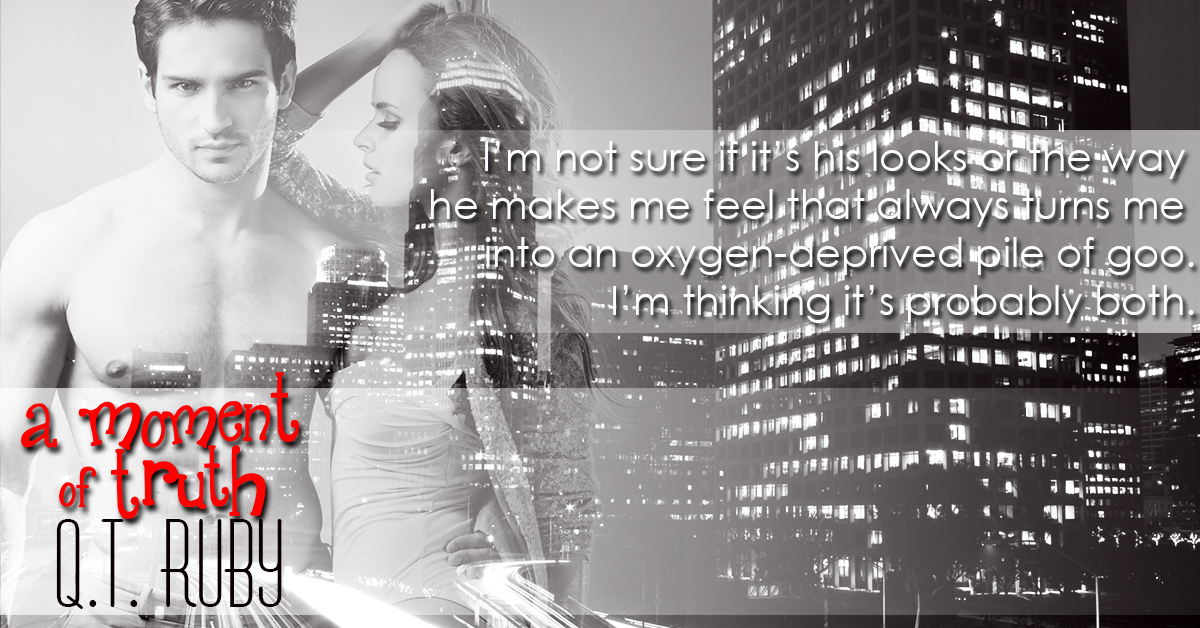 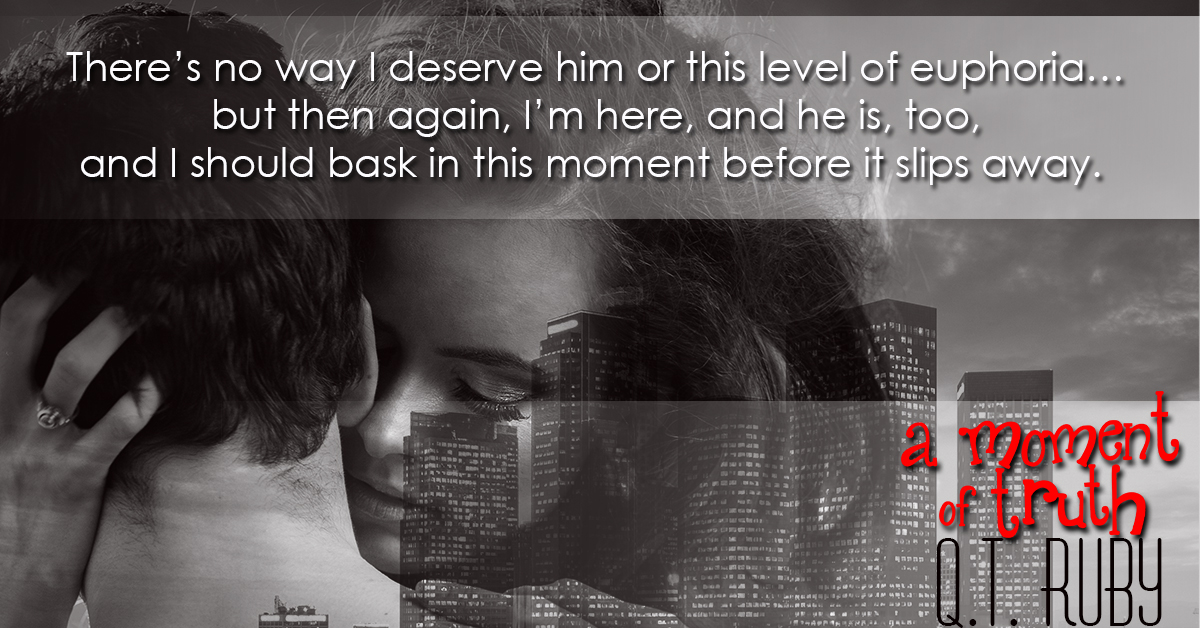 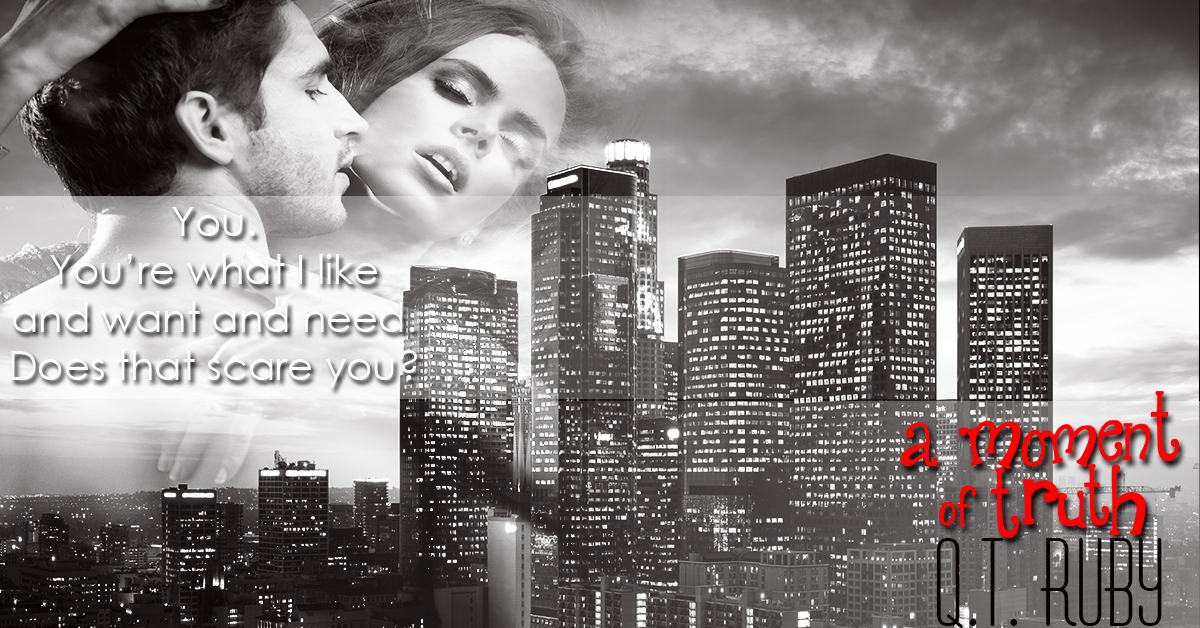 Ruby’s thoughts are everywhere. To harness the madness, she gave her loudest characters a playground to frolic in. Q.T. Ruby invites you to come play too!