Life has dealt some heavy blows to Mackenzie Tillar. Bullied as a child, and no one to turn to, the one person, who was meant to protect her, to raise her, and surround her with unconditional love, had let her down. Kenzie learnt to deal with life in her own promiscuous way. Until that one fateful night when she met Sam, now she was contemplating breaking the very rules she had instigated.

For Samuel Edwards, being orphaned at a very young age meant that he found his own way in life. He lives it as he pleases, no room for relationships, no belief in love. It was never a part of his life. He’d never craved it, and never missed it. Until one night when he meets his match with Kenzie, she has the same rules, same fears.

Now they are playing a game, a game that suggests more, but is it more than they have bargained for?

** This book is Part 1 in a series, but is a stand-alone. There is no cliffhanger.

**This book contains some sexual content and disturbing situations. Over 18 years 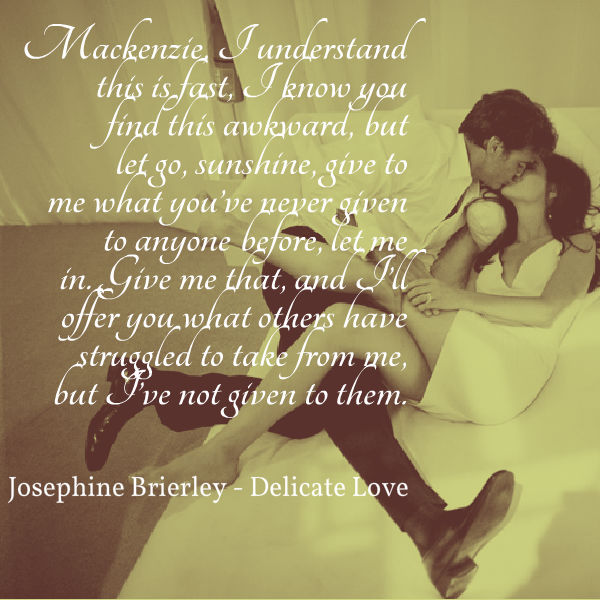 Can you want ‘more’ from someone when you’re not sure what that more is?

We meet Samuel and MacKenzie in Delicate Love – two broken souls living in the moment, for the moment…until they meet each other. A random one night hook-up, which includes questions from The Thirty-Six Questions That Lead To Love…and more passion than they’ve both ever experienced…leaves them each questioning their personal choices about love and relationships. However, it’s not enough to keep Mackenzie from doing what she does best…run. Sam is disappointed when he wakes up the next morning alone in bed. He wanted to know more about the sexy, mysterious woman…he wanted to spend more time with her, and those are things he’s never wanted before.

Though the one night they shared together seems to be on constant replay in each of their minds, Sam and Kenzie move on and move forward, becoming involved with others, and unbeknownst to them – living in the same town. A chance meeting at a house warming months later brings back memories of their night together, and much awkwardness. So begins the dance of dysfunctional friendship…and the continuation of The Thirty-Six questions.

Traumatic childhoods have shaped the personalities of this non-couple. They don’t do relationships and they definitely don’t do love. But still, there is something there that draws them together, something neither of them has felt before.

Terrified of his feelings for Kenzie – and in a generic relationship with a distracted blond, Sam battles an internal war. He knows his current relationship is not for him. He knows he wants Kenzie, but can he really do forever? Kenzie’s demons are just as bad, but for all her independence and words of wisdom from her late mother, she got on my last good nerve. By no means, am I discounting or downplaying the hard knocks life has given her, but…dayum. At what point do you take ownership and responsibility of your own life…and by responsibility I don’t mean running away every time you ‘feel’ something.

Kenzie had times when she seemed so focused and positive, but five minutes inside her own head quickly changed that. She was reactive instead of proactive, making horrible decisions…one which nearly ended her life. Meh.

Much respect for Lily, Rebekah, cousin Zoe and Aunt Sophie. They stuck by and supported Kenzie…maybe even a little too much. They each gave her sound, honest advice – and she took it to heart and became proactive…for a New York minute. Afterwards she’d do the ‘Kenzie Over-Think’ and Run. Away. Meh.

It’s Sam’s persistence that melts your heart. He isn’t any less damaged than Kenzie, but he is willing to take a risk…and the thirty-six questions help him keep the door open. They also give him much insight into Kenzie…and himself.

This is not a cozy, feel-good read. It is a journey of two people broken as children, who try to move beyond the burdens of their pasts, to make decisions in the present that will affect their future. 1-click it today.

Josephine (Jo) is that person that watches the world turn, studying the characters that exist in life each day, finding different personalities, traits and attributes that can be worked into the stories that flow into her head.

She loves the escapism of writing, finding the time to create new characters whenever she can. With the support and encouragement of her husband, Jo has completed her second novel.

Delicate Love is an adult contemporary romance, with just a touch of anguish. Its real life, mixed with angst and romance. The story revolves around 36 questions that were originally written as an experiment by Arthur Aron, 41 years ago. His aim at the time was to have a couple fall in love within his laboratory, to prove that intimacy could be encouraged. The laboratory part sounds romantic doesn’t it?

Chasing Butterflies was Jo’s debut novel, and is a story she decided she wanted to tell after her own experience with breast cancer. In July 2012, Jo decided that a Bilateral Mastectomy was the best option for her after being diagnosed. Thankfully she was given the all clear after her surgery. It is a story based loosely on her own breast cancer journey, a story of a young woman who faces decisions that no one should have to and finds love along the way.

Jo lives on the Gold Coast, Australia, with her husband Rob, and pet dog Paris. Together they love entertaining, good times with friends and enjoying life.