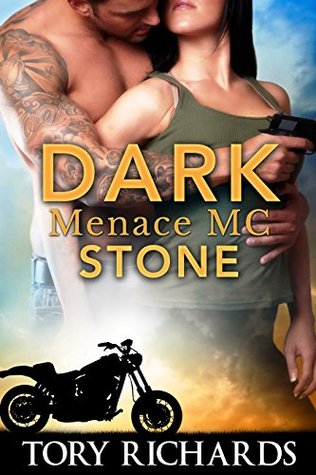 A well developed and executed storyline kept me glued to this book and made it a one-sitting read.

The Dark Menace MC is going about their usual “business” – trying to collect on a bad debt – when the sister-in-law of their ‘client’ barges in. The bikers have no intention of leaving before sending a message to the deadbeat client (Ronald) and collecting collateral on the debt. In a bid to save the idiot’s “naive” wife…and her younger sister, from what being held by an MC could mean, the sister-in-law, RACHEL, agrees to go in her place.

And we’re off and running!

If bad decisions had a queen – it would be Rachel. Still not sure what made her feel she was better suited to go with the bikers than her sister. She worked in a bar – big whoop! She was not street savvy and had no swagger. She always believes she can “handle” a situation…until it blows up in her face. Fortunately for Rachel, MC prez, Stone, is fast developing a thing for her. While she’s argumentative and confrontational at every turn, it takes her far too long to understand that being under Stone’s protection is the best thing for her.

Stone is no choirboy and the Dark Menace MC is no charity. Despite his growing feelings for Rachel, the club and the debt owed them comes first. He inadvertently finds out about the horror Rachel endured as a child at the hands of a sadistic stepfather, Wildman, who turns out to be the same  slimy prez of a truly foul MC who want to take over Dark Menace (and everyone else’s) territory by any means necessary. He also wants Rachel back.  Stone doesn’t plan to let that happen as he bands with other MCs to smoke out Wildman and end him and his lot once and for all.

With a couple of epic MC battles (the battles are awesome!), it probably would have been over and done, but where would this story be without Rachel’s BAD DECISIONS? OMG, this woman!  Ten seconds more of true thought each time would probably have saved lives, but that’s not her way. There’s a passage early in the story where Rachel speaks of her sister’s lack of good judgment. HA!  Hello Pot, meet Kettle!  Rachel’s extreme lack of good judgment, and yet another bad decision, leads Stone to make the douche-bag move of all douche-bag moves! I had to put the kindle down and take a moment. I “understood.” Everything has a cost and a price has to be paid. I just didn’t agree with HIS decision.

Tory Richards truly knows how to reel her readers in because just as I was about to start drinking…excessively…I actually began to kinda, sorta like Rachel – and I loved her compared to Rita…Ew! (Wait until you meet Rita – and wear a body condom!) LOL!

Stone as the anti-hero is perfect. He has the respect and loyalty of his club, and the respect of other clubs, but even he’s perfectly flawed and capable of making a few bad decisions. While he’ll never walk away from Dark Menace, his internal thoughts key you into the true man.

It’s a wild ride with plenty of bumps, but “Dark Menace MC: Stone” is definitely a ride worth taking.