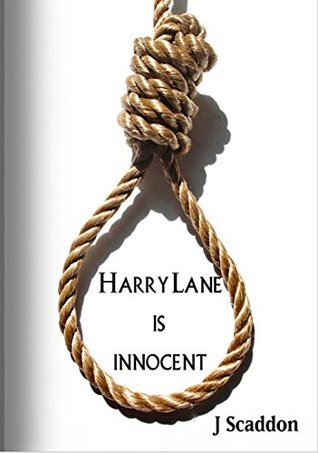 While this is a work of fiction, it brings to mind the question, “Why are we always so quick to think the worst of those who are simple-minded and slow?”

Harry Lane is a gentle giant born with severe learning difficulties. His supportive parents and sister love him unconditionally and try to protect him from the regular barrage of bullying. Harry is in the wrong place at the wrong time while running an errand, and is much too quickly labeled, arrested and convicted of murder.

A quick read at less than one hundred pages, “Harry Lane is Innocent” took me longer than usual to read because it gave me pause so many times. The thought processes and actions of those in law enforcement and the judicial system are questionable at best, and appalling and offensive at most.

The travesty that is supposed to be his trial is made even more offensive because the most reprehensible person involved is Harry’s barrister (defense attorney.) Someone with a brain and an ounce of compassion would surely have gotten a different outcome, but Albert Mayor is only concerned with self. His trainee, Florence Ranger, is aware of inconsistencies in the evidence, confession and testimony, but as a female barrister in 1948 London, she simply doesn’t have the confidence or support to help Harry…in the beginning.

“Harry Lane is Innocent” is a solidly written tale which examples Murphy’s Law – anything that could go wrong…did go wrong.

On a personal note, I could have used a slower pace, and seen more of Harry’s family during his incarceration. It seems almost cruel that they were separated for so long. Even though he was convicted, his limited comprehension skills should have, at the very least, allowed him regular visits with his family.

Florence Ranger eventually gets the ball rolling on Harry’s behalf…only wish she had started sooner.

Fans of crime dramas, police procedurals and mysteries will definitely enjoy this read.